If You Really Want To Know What's Happening With Tech in Cuba, Read Beyond the Headlines 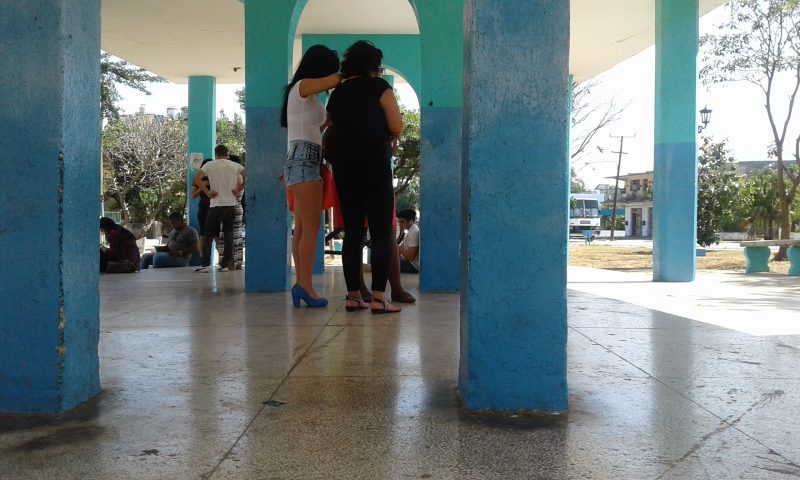 Women gather around a mobile device at a wifi hotspot. Playa, Havana. Photo by Ellery Biddle.

“Will Cuba embrace the Internet revolution?”

These recent headlines from AFP, Al Jazeera and BBC, respectively, paint a picture of a society that after nearly six decades of dictatorship and nearly two of “digital isolation”, is finally bursting onto the global Internet scene. But the articles that follow, all published by reputable news organizations, offer a much more sobering and realistic image of a country where Internet access is fleeting, connection quality is poor, and the costs of getting online are astronomical. 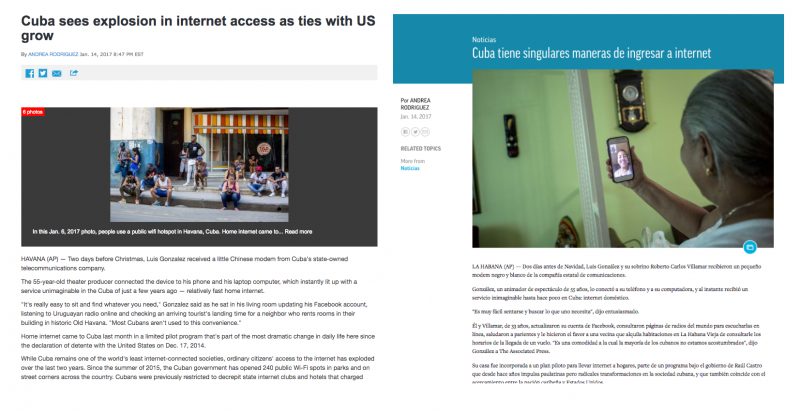 Screenshots of English and Spanish versions of Andrea Rodriguez's AP story. “The Spanish headline plainly introduces the topic of focus; the English version does something very different.”

Written by Associated Press’ Andrea Rodriguez, who is originally from Argentina and has worked in the AP Havana bureau for more than ten years, the piece offered a well-researched description of the pilot, including a series of detailed anecdotes about the different ways Cubans get online or use networked technologies for work, education and communicating with friends and family. It also points to a new state telecommunications program that will allow Cubans to pay for at-home Internet connections for either $15 or $115 per month, for 30 hours of service.

The texts of the story versions in English and Spanish mirror one another—this is a direct translation. But while the Spanish headline plainly introduces the topic of focus, the English version does something very different, likely reflecting the work of a web editor whose primary concern is to attract readers. Perhaps headlines need a little more pizazz if they want to capture English-language audiences—a purported explosion in Internet use would surely attract clicks from Cuba-curious Americans.

And in keeping with other recent headlines on tech in Cuba, the headline on the English version of the AP story supports the idea that Cuba's renewed ties with the US may be helping to drive the island's would-be “Internet revolution.”

Since the December 2014 rapprochement between the US and Cuba, US media outlets have buzzed with intrigue about the perceived role and uses of technology in what remains a mysterious country for many Americans. Silicon Valley companies like Google, AirBnB and Netflix have experienced impressive PR bumps from stories that essentially say “our services are now accessible in Cuba.” Some US media coverage of these developments is sensational, but innocuous. And some of it is outright misleading.

In late 2016, when Google began offering caching for Google sites in Cuba—a standard service worldwide for users to access Google sites like Gmail and YouTube—multiple major media outlets ran a Reuters story with headlines boasting that the Google agreement would improve Internet access wholesale, including the above from Al Jazeera. (To Reuters’ credit, their original headline focused on the agreement and made no mention of “better Internet.”) 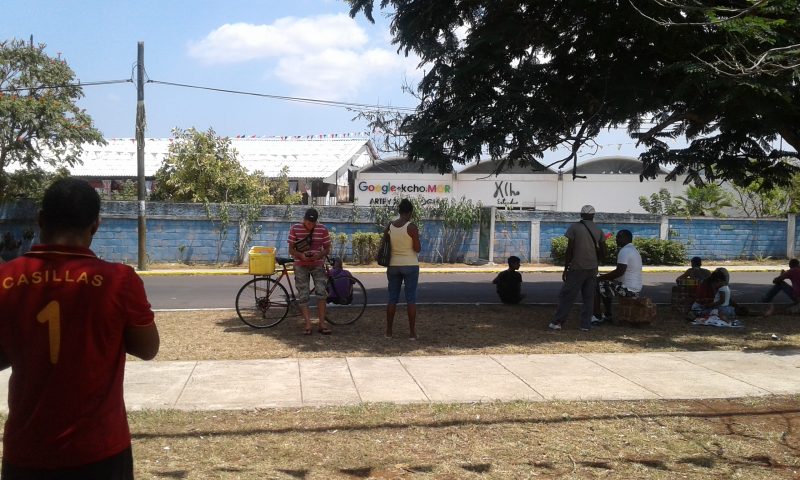 The view from outside Kcho's studio and adjoining art space, the Museo Organico Romerillo. The Google logo now appears beside Kcho's name. Photo by Ellery Biddle.

When Google partnered with Havana artist and Cuban Communist Party loyalist Kcho to create a new access opportunity at the artist's studio on the outskirts of Havana, global media flattered the company with headlines like  “Google helps offer vastly faster Internet in Cuba” and “Google opens state-of-the-art technology studio in Cuba”.

Yet from what I could see, and from what various employees at Kcho's studio told me when I visited the place last year, it appears that Google essentially gave them 20 Acer Chrome books, 20 Google cardboard sets and a generous set of promotional materials, including several prominent “Google + Kcho” flags that adorn the otherwise advertisement-free roadway outside the art space. The studio itself has existed for several years, and the WiFi connection was opened to the public by Kcho, with the government's blessing, in 2015. The connection, contrary to (later corrected) reports of a whopping 70 megabytes per second download speed, is not especially fast.

“How the Netflix move will help Cubans”

In my own experience writing on these topics, I've struggled with editors at various reputable news and policy organizations who seem determined to put forth a narrative about the US “saving” Cuba with technology, even when the story I've written doesn't support this idea at all.

When Elaine Diaz and I wrote about the irony of Netflix launching services in a country where Internet connectivity is fleeting and no one has a credit card, we were glad to see the story republished by US outlets, in accordance with Global Voices Creative Commons license, which allows for headline changes. But when we saw the piece republished with headlines like “How the Netflix move will help Cubans,” we realized that the actual story was no match for the power of the “Cuban Internet revolution” trope.

This and other US media coverage of the recent shift in US-Cuba relations reflect a longstanding popular narrative in which the United States sees itself as the patron or colonial parent of the underdeveloped Cuban state. And as with so many other countries less developed than ours, we imagine our government—and now our technology companies—acting as the savior to the people of the country, empowering the disempowered through the (sometimes) democratizing effects of our multi-billion dollar tech innovations.

With the collective hysteria about false information in news media in the background, these headlines reflect a small but important problem that arises when we try to write our news for clicks. When we combine our hunger for web traffic with entrenched biases about the United States as a patron of what too many Americans still imagine to be a forlorn Communist island, we land on a path to increasingly misleading, poorly researched narratives about a place that is indeed knowable and deeply connected to the US, in culture, intellectual history, and much more.

At a moment when human beings—Cubans included—are more connected to one another than ever before, editors can and should strive to do better by their readers.