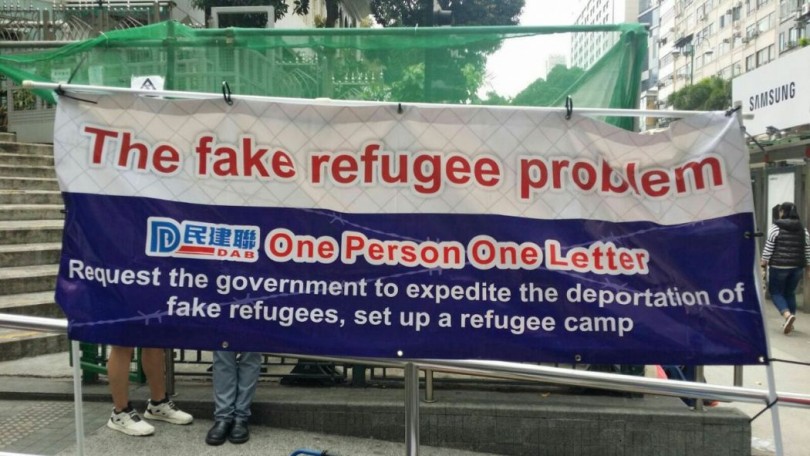 Pro-Beijing Political Party and newspapers are working together to create the “fake refugee” problem and advocate for close camp. Image via HKFP, used with permission.

This post is a version of a news feature written by Jon Leung in Hong Kong newspaper Sunday Mingpao, on 1 January 2017. Global Voices translated, edited and published this version as part of a partnership agreement.

“Fake” or falsified news stories have played a significant role local politics in Hong Kong since 2014, when tens of thousands of demonstrators occupied three downtown areas calling for citizens’ rights to nominate the city's top leaders.

With Hong Kongers largely divided into two major camps — pro-establishment (i.e. pro-Beijing) and pro-democracy — it became commonplace for opposing sides to attack one another with fake news, falsified information, and re-mixed images.

While the massive protests of 2014 have ended, fake news has not. One prominent recent example was a news story about a pregnant woman who had gone into labour, but was unable to reach Ruttonjee Hospital due to protesters blocking roadways. Pretty soon, it was pointed out by a netizen who cared to make a call to the Ruttonjee Hospital which confirmed that the hospital does not have maternity ward.

Confronted with an increasing number of false and unverified reports online, a group of media activists created the Facebook page Kau Yim (meaning “verification”) to verify important information and identify fake news. For two years, the group and their followers have worked together to point out suspicious information and news circulating online, and to speculate on the motivations of fake news promoters.

The page releases an annual “top ten fake news stories” roundup to alert the public and urge netizens to be careful when sharing news and information online. But in a recent comment, the team expressed concern that the trend can no longer be reversed:

The rumors and unverified informations always have a much wider circulation than the verification from our page. There is no way to counter or undo the damage done.

There are various issues in play, including misleading news circulated through content farms. According to the page administrator:

[These content farms] package themselves ordinary news sites on Facebook. Usually, they would use words like “breaking news”, “reporter verified”, “breaking news with image” to attract readers attention.

Some online news sites are also irresponsible, the administrators pointed out:

In the past, media outlets’ principle is “if in doubt, leave it out” and they would not share information that they can’t verify. Today, the principle seems to be “if in doubt, add circulated online and print it out or share it out”.

The Kau Yin group selected and published a set of influential — and indeed fake — news headlines from 2016. Here are some of the highlights:

This fabricated revelation has gone viral via content farms, mobile messages and social media in Hong Kong. No evidence has been attached to the accusations, and Hong Kong Red Cross issued a statement rebuking the report. Yet the news continues to re-emerge online, likely due to the escalating tension between Hong Kong and China.

New immigrant woman in Yuen Long uses social security assistance to buy Gucci handbag, refuses to pay rent despite housing subsidy, and then complains to government for giving her too little money to shop.

The “news” was circulated by a content farm in December 2016. However, the photos used in the “news” were recycled from a news report in 2008 and the woman featured in the original story was not a new immigrant.

The “news” about Wai Zai, a 12-year-old boy who had been living in Hong Kong for nine years as an illegal immigrant, has been recycled again and again since 2015 when his grandmother decided to reach out to a pro-Beijing politician, Chan Yuen Han for help. She wished that Chan could help his grandson to obtain document so that he could receive proper education.

As local media outlets dug into the background of Wai Zai and found a number of inconsistencies with what’s been presented to the public, the grandmother decided to bring boy back to mainland China to his parents. Many see the grandmother as a liar who wanted to win public sympathy in order to get citizenship for her grandson.

After community organizer Sze Lai-shan, who has been advocating for social security for new immigrants in Hong Kong, visited Wai Zai and his grandmother in Shenzhen after they left Hong Kong, her name was attached to a series of fake news stories about Wai Zai. Despite the headlines, there is no evidence that Wai Zai has returned to Hong Kong with a one-way visa.

On 7 March 2016, a shopkeeper of a 24-hour store was severely injured by a Canadian Vietnamese man when he confronted the man for shoplifting. The shopkeeper died in the hospital on 14 of March. With no evidence to support their claims, local media outlets quickly labelled the suspect a refugee. Pro-establishment civic groups then staged protests, with banners urging “deport fake refugees, put the torture claimants in closed refugee camp.”

The protest was again widely reported by many mainstream media and pro-establishment media outlets without clarifying the fact that the suspect was not in fact a refugee.

The video went viral in Hong Kong in through mobile instant message groups and was then picked up by mainstream media outlets as news feature. Later, it was revealed that the video was taken from Kazakhstan and the woman in the video is reportedly the baby’s mother.

From the above few examples, one can see that many fake news stories are built upon stereotypes and prejudices, as well as xenophobia and antagonism towards Beijing's economic and political influence. Marginalized social groups, including new immigrants, foreign domestic workers and refugees are often the real victims of fake news.