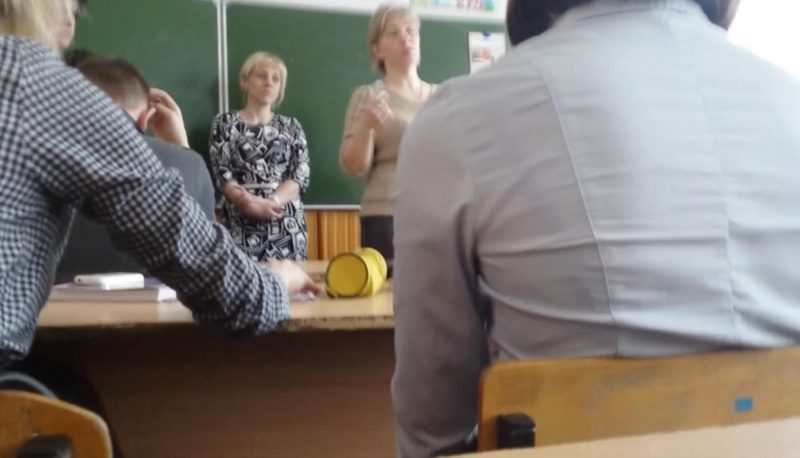 At a school outside Bryansk, about 350 miles southwest of Moscow, the principal sat down last week with a class of students to talk about anti-corruption activist and opposition leader Alexey Navalny.

Why the sudden heart-to-heart? Police had just grabbed Maxim Losyev, one of the school’s students, straight out of the classroom for urging classmates to attend an unsanctioned demonstration on March 26 calling for an investigation into corruption allegations against Prime Minister Dmitry Medvedev. Losyev also created a student group in support of Alexey Navalny, whose Anti-Corruption Foundation published an investigation earlier this month accusing Medvedev of masterminding a vast and illicit private empire.

In an effort to prevent further activism, the school’s principal — reportedly a woman named Kira Petrovna Gribanovskaya, referring to herself in the third person — discouraged the class from supporting Navalny, and even questioned the room’s intelligence and patriotism, when students challenged her assertion that Russia is in the middle of a “civil war.”

One of the students recorded the meeting with Gribanovskaya, and leaked the footage on social media. This weekend, the news site Meduza transcribed the nine-minute encounter. You can read the Russian transcript here, and listen to the Russian audio below.

Principal: Raisa Aleksandrova [the homeroom teacher], may I say something? This is for those who have taken an interest in Navalny’s activities: Okay, he proposes that we smear our top leaders. He says, “No to corruption” and so on. But what specific actions does he propose? Assemble for a protest? Tell [Medvedev] what a jerk he is?

Student 1: He just wants answers. He filmed a video about Medvedev, and he wants answers from the authorities.

Principal: And so what?

Student 1: And the authorities are silent.

Principal: No, hold on. If you film a video about Kira Petrovna, and write about how she’s this way and that way, how she’s not doing her job, and how there are cockroaches running around all over the school, and you come out to protest, demanding answers — do you think I’ll come out to have a conversation with you?

Principal: And he [Medvedev] won’t, either! It’s a joke! A political platform is about concrete actions: strengthening the economy, developing various plans. What Navalny is doing is a pure provocation. Do you get it? You still don’t understand this. I’ll tell you this straight: right now, our economic situation is very unstable. It’s an economic pit. And why’s all this happening? You’ve taken social studies and all that. You know that we’re basically living under an economic blockade in this country. But I want to hear what you think. What’s going on right now?

Principal: And what’s causing this crisis?

Principal: One more time — what’s the cause? The European Union, right? And our leader is managing a very stable and very strong policy. He has an enormously high rating on the world stage. Due to what? Due to foreign policy. [Russia’s] domestic policy, of course, is rather weak. Why? Well, because there’s no money. And we’re feeling that now, most of all…

Principal: And why’s that? Tell me: what’s the reason?

Student 2: Because of Crimea. We basically took it.

Principal: And do you think that’s bad?

Homeroom teacher: But did we really take it? There was a referendum there…

Principal: Okay, tell me what happened, from your point of view. I actually want to know. Tell me. Maybe there’s some side to this that I don’t know.

Student 2: I mean, why did they impose sanctions against us?

Principal: You just answered your own question a moment ago.

Homeroom teacher: As a show of force. Because they wanted to show their strength.

Student 2: Because of Crimea.

Principal: You know why… And why did the whole war in Ukraine start in the first place?

Student 2: Well, because of the revolution…

Principal: Because of the what?

Student 2: The transition of power.

Principal: Kid, you haven’t read anything about this and you don’t know a thing. You’ve got some very superficial knowledge here. What started this whole conflict? Maybe it was because America stuck its nose in?

Principal: And Crimea up and went where? And how did America react to this?

Student 2: Did you see American troops in Ukraine?

Principal: And did you see Russian troops in Ukraine?

Student 2: Yes. There are videos going around — you have no idea.

Principal: The videos are staged, for starters.

Homeroom teacher: And you shouldn’t believe them…

Student 2: I’ve heard a lot of information that friends of certain people are there…

Principal: Guys, I can see that you’re looking at this problem one-sidedly. And that you lack range in your political view. It’s a very narrow problem: you see Navalny, you watch his video, and — boom — you believe it all. You don’t have your own opinion about this issue — only what’s being imposed on you. And so sometimes you embrace sources that are unverified or maybe even outright provocative.

Student 2: And what if our opinion coincides with his?

Principal: But do you even have an opinion? You go ahead and read. I’m pushing you not just to look at these sources… If they say that, yeah, it’s bad here, then look at other sources.

Student 2: Okay, but we’re not looking at a single source.

Principal: Well, apparently you’re only looking in a single direction.

Student 1: Yeah and our TV networks only show what’s good for the government…

Principal: You’re not listening to Voice of America?

Student 1: They [Russian TV networks] aren’t going to show us anything else.

Principal: I got it. Somehow, we messed up your civic education. In terms of civics, you’ve got big shortcomings. Do you all mean to tell me that there are no patriots in your class?

Student: And what does it mean to be a patriot? That you support the authorities?

Principal: I was speaking to Nikita…

Principal: Guys, raise your hands: how many of you do any volunteer work?

Principal: And what’s volunteering for? There’s your civic position! You don’t need to be looking down from on high at Putin and Medvedev. Look at our neighborhood!

Student 2: And the volunteering that’s organized and supported by United Russia [the country’s ruling political party]?

Homeroom teacher: Why do you say “we”?

Student 2: Raise your hand, anybody who’s against United Russia.

Student 1: I’m against them.

[Other voices: Is that everyone? Anyone else?]

Principal: And you’re for what exactly?

Principal: And what exactly is justice?

Student: It’s what we don’t have right now.

Student 1: Justice is when the authorities care about their people, and not just about themselves. When they care about ordinary citizens, and not about their millions [of dollars]. Many people want to live in a free state, in a free country…

Principal: So you think that life in this country got worse with the arrival of Putin and Medvedev?

Student 1: No, but they’ve stayed too long. They’ve just been there [in power] for too long.

Principal: Did you live in some other era that I somehow missed? Under whom did you live well? And under Putin and Medvedev things got worse for you?

Principal: What does “well” mean? I’m asking you, specifically you: Under what ruler did you live well? What do you mean “well”?

Student 2: We’ve only ever had one ruler, actually.

Principal: You said that things have become worse. But you never lived through the hard years of the 1990s. When, forgive me for saying this, everyone carried around a blade and a firearm, and the country was in chaos. And this was when I was studying in college! This was when it was scary to go out into the street after eight at night. You didn’t see this.

Student 2: And you want that all over again?

Homeroom teacher: You’re the ones who want that!

Student 2: They just arrested a person for absolutely nothing. They carried him off to the police station.

Principal: This is civil war.

Student 2: This is lawlessness.

Principal: That’s true — it’s lawlessness. Because what is the aim of any protest or any schism?

Principal: And then civil war. Fratricide.

Student 2: We don’t want these officials.

Homeroom teacher: Tell me: can you actually do this right now? How?

Homeroom teacher: And then when?

Student 2: There will be a crowd.

Homeroom teacher: A crowd. And then what?

Student 2: People will at least see. They’ll see that there are citizens.

Homeroom teacher: Citizens. In other words, a bunch of [young] people led by adults with nothing to lose, so to speak.

Principal: Guys, we tried, at least, to warn you about all this, and let you know. What’s happening now is called polemics, and nobody needs it. Regardless, what you need now… I’m advising you, I’m not insisting, but I’m advising that you listen to what we said, and you draw your own conclusions. More than anything, I’m thinking about your future.

Homeroom teacher: Remember that a lot is at stake.

Principal: I put up a fight with these law enforcement officers. I tried to defend Maxim. I said that these were just some juvenile antics that nobody needed. Believe me, he’s not having a good time right now. Not at all. I don’t want any of you to land in a similar situation. Everything that you’ve said here from behind your desks has been empty words. I’m telling you again: get up, grow up, and make something of yourselves. That’s the right thing to do.

The news site Meduza transcribed the encounter found above. You can read the Russian transcript here.