Brazil's prison population has grown 161 per cent between 2000 and 2014. Photo: Screenshot of Human Rights Watch's documentary “Brazil: Where Inmates Run the Show”

Brazil is currently experiencing an unprecedented crisis in its prison system. In just two weeks earlier this year, riots in prisons across eight states left more than 130 dead. The situation has not only brought attention to the prison system's violence, but also highlighted a vocal segment of Brazilian society cheering on the bloodshed.

According to the newspaper El País, the recent killings in Brazilian prisons are the result of the collapse of a “peace pact” that's existed for almost two decades between the country's two biggest criminal factions: the Primeiro Comando da Capital (PCC, First Command of the Capital), headquartered in São Paulo, and the Comando Vermelho (CV, Red Command), based in Rio de Janeiro. To make matters worse, both groups have at their disposal vast constellations of smaller regional gangs.

On Jan. 1, sixty-four detainees were killed in the Anísio Jobim Prison in Manaus. The victims were mostly members of PCC, whose hegemony came under attack by the local group Família do Norte (FDN, Family from the North). Throughout the month, similar attacks followed across Brazil.

In addition to controlling the weapons and drugs traffic in large urban centers in Brazil, the CV and the PCC, which formed inside prisons in 1970 and 1990, respectively, have established themselves as the unofficial administrators of the country's prisons. For 20 years, a pact between the two groups preserved a fragile peace, also bringing down homicides in several cities.

Late last year, the truce apparently broke down, and Brazilian prisons have been a war zone ever since.

Human rights violations, including torture and extrajudicial killings, are not uncommon among the Brazilian security forces. Massacres carried out by police officers, in and out of uniform, have been worryingly frequent on the outskirts of large cities since the 1990s. In 2015, a report by the international organization Human Rights Watch described the Brazilian prison system as a “disaster on human rights.”

Brutal as the prison system is, it has many supporters in Brazil. Extreme rhetoric that used to be limited to the political fringe has surged into in the mainstream and on social media. Some on the right now openly support the “elimination” of individuals deemed to be socially “undesirable.” And they want it made part of the state's official policy on domestic security.

During one recent spike in prison violence, the Facebook page Direita ao Vivo (Live Right) published a spreadsheet ranking prisons according to the deadliness of their riots, calling it the “Correctional Games Champions League.” First place went to the now shuttered Carandiru Penitentiary in São Paulo, the site of the largest prison massacre in Brazilian history, where military police executed 111 prisoners in 1992. Direita ao Vivo satirizes and celebrates the war between the country's two criminal factions, likening it to a game, while subscribers leave comments cheering for more deaths. 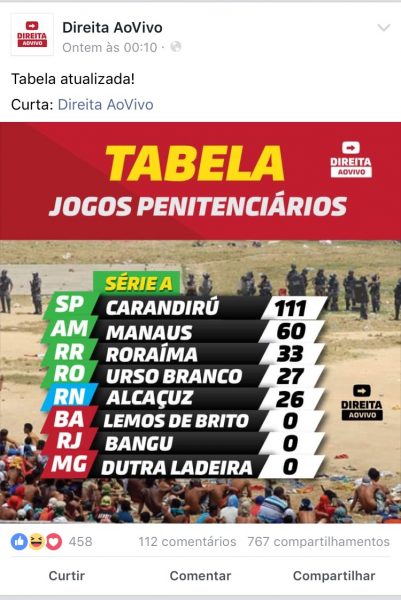 And there are plenty more jokesters online approvingly mocking the extermination of incarcerated people. YouTube star Marcela Tavares, whose audience exceeds 400,000 subscribers, proposed replacing the Brazilian version of the TV show “Big Brother” with something called “Big Brother Bandit,” saying prisons should broadcast their massacres on television for home entertainment. At the end of his video, she told her audience cryptically, “Who says I'm joking?”

Internet comedians aren't alone in supporting violence against Brazil's prison population. National Youth Secretary Bruno Júlio said in an interview, “There should be more deaths. There should be a massacre every week.” He was ultimately pressured to resign, but approval from supporters poured in on Facebook.

Congressman Major Olímpio raised eyebrows, too, when he posted a death count, referring to the Gericinó correctional facility in Bangu.

Olímpio belongs to the National Congress’ so-called “bullet caucus” — a coalition of tough-on-crime conservative deputies who advocate arming the population and boosting the state's policing powers.

When it comes to Brazil's prisons, the national rhetoric has been growing more bloodthirsty for years. With the penitentiary system now in open chaos, some public officials and Internet users are actually encouraging the violence, welcoming it as a necessary “purge.” Criminal penalties are tougher now, too. There are more crimes on the books, and incarceration periods are longer than ever.

Together with the drug war, this crackdown is fueling a kind of “penal populism” that has swelled the prison system beyond capacity.

According to Penitentiary Integrated Information System (Infopen), a research institute within Brazil's Justice Ministry, the prison population grew 161 percent between 2000 and 2014, making it the fourth largest internationally. Also worrying is the fact that roughly 40 percent of these inmates never went to trial.

Despite the explosion of policing and imprisoning, Brazil's crime rates remain sky high. In fact, the country maintains the eleventh highest homicide rate in the world, with an average of 32.4 homicides per 100,000 people. And the chaos of Brazilian prisons may have contributed with the growth of the very criminal organizations that are, today, at the center of this crisis.