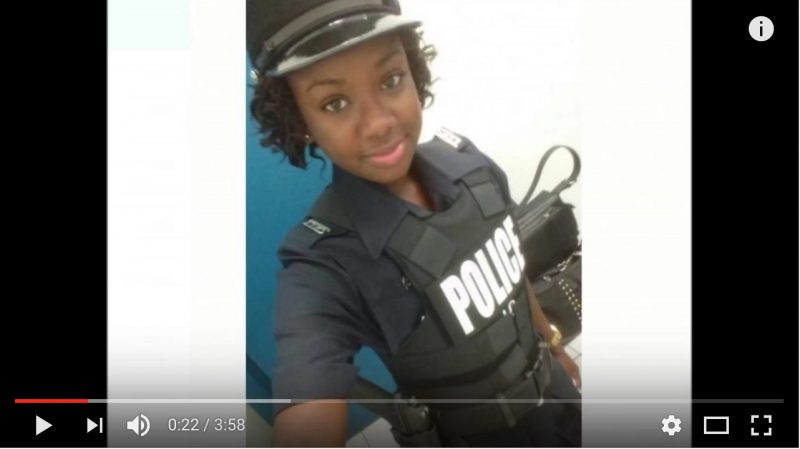 The search for Nyasha Joseph, a woman police constable (WPC) who had recently gone missing, has come to an upsetting but not entirely unexpected end. On Wednesday March 15, 2017, a Trinidadian fisherman discovered a body in the Gulf of Paria, which was later confirmed to be that of 22-year-old Joseph. A man is in police custody in connection with her murder, which officers suspect stemmed from a domestic dispute.

Thursday's autopsy, however, yielded inconclusive results as to the actual cause of death.

The report also referenced other research, which found that “over one-quarter of the men on death row in Trinidad and Tobago have been charged with killing their wives, girlfriends, or common-law spouses”.

Social media users have been vocal about Joseph's murder, just as they have been about the many other incidents of gender-based violence the country has been facing. Calling out society's penchant for victim-blaming, popular news site Wired868 wondered how many murders it would take to puncture Trinidad and Tobago's self-delusion:

The wolves are not even bothering with sheep’s clothing anymore. And even police are not off-limits. The only ones engaged in self-delusion at present is the public.

The post was unapologetic about its lack of faith in the police service:

Besides distributing speeding tickets and assisting wreckers, what does the police do effectively? Why even bother with the charade anymore?

Instead of looking us square in the eye and insisting that ‘officers are working assiduously to bring the perpetrators to justice’, acting Police Commissioner Stephen Williams might as well tell Trinidad and Tobago: ‘Your guess about what we should do now is as good as mine!’

‘Where are the men?’

On Twitter and other social media platforms, much of the public discussion focused on the recurring theme of how Caribbean men are socialised:

Is male culture here and the men who are a part of it ready yet to admit something is very very wrong?

Another confirmed death that may turn out to be a Domestic-Violence incident.
Men: please leave our women alone!
Men: Control your emotions and ask for help if you do not think you can
Men: For !#@k sake
MAN UP!
Be a REAL MAN

Responding directly to Tillah Willah's question, Taran Rampersad said that he wanted to have a different conversation:

It's not a trivialization of what empirical evidence there is: The latest constable killed in Trinidad and Tobago – a WPC, her legal title, is unfortunately the flavor of the week of Crime in Trinidad and Tobago. And violence against women, too, is at issue with 56,744 court matters for protection orders in the last 2 years in this dual island country.

And I already, in a separate update, asked why a legal title would HAVE ‘W’ in it to designate someone as someone with ovaries when they do the job of a Police Constable – something that by itself shows a lot if one were to actually think about it. But not everyone thinks about it. That's part of the problem.

Predictably, there were several snarky Facebook status updates pointing fingers at Womantra, a regional feminist lobby group whose focus is to advocate for gender justice. In the past, the group has been criticised for only speaking up on issues when it is convenient. However, Teocah Arieal Ainka Dove stemmed that tide very early on:

Instead of asking WHERE IS WOMANTRA
Look in the mirror and ask yourselves ‘WHERE AM I’ […] For months, some of you ill-informed, ignorant humans have been peddling a narrative that ‘Womantra only speaks up for high coloured women’ (NEWS FLASH: They are all women of colour) or ‘Womantra only talking now because they want publicity’. […]

Shame on anyone on FB speaking out against Womantra. Against any group crying for justice. I am so fed up of our smug men, & yes, women, in this country who lash out with great authority from behind their laptops.
Get off your arses & stop the killing of our people.
Not easy eh?

Even as the country's Minister of National Security urged Trinbagonians not to lose hope in the face of violent crime as it would be tantamount to “dying ourselves”, many netizens — particularly women — were concerned that the trend would eventually catch up with them. Stollmeyer Wight, like many others, was at a loss as to what to do:

Should we march as if we have never marched before? Write to the newspapers as though for the first time, hoping this would help stop the bloodshed?
Pray? […] Do we take this cry for justice to parliament, to the corridors of so called power, to watch those empty heads bowed, avoiding our eyes, preening for the camera, secretly counting the money they buy our votes with?
I do not have any of the answers, but I fear far worse.
Another sister, daughter, mother is gone & ‘doh fool yuh fat’, any one of us could be next.

I hear the anger in your voice over the murder of WPC Joseph. […] I understand your pain. Believe me, I do. She was one of yours – one of your family – and she has been irredeemably harmed.
But you see, sir, Nyasha Joseph was a woman before she was a police officer. As I am. As so many of my friends and family are. And I feel your pain because before she was one of yours, she was one of ours.
And because I and my sisters have been feeling traumatized for a long, long time, sir. Now, we embrace our sister in her violent death, shed tears, acknowledge our anger, and move on.
As we must, repeatedly, because generally speaking, you and those who work with you never seem to be quite as traumatized when the rest of us fall….. in OUR tribe, CoP Williams, WPC Joseph is simply another fallen sister, whose life is one of the latest to be sacrificed……And we have learned through bitter experience that generally, we can expect nothing significant or useful from you.

Another facet of the discussion on violent crime is talk of amending the country's Cybercrime Bill to stop social media “abusers” from posting gruesome images and unverified information, a position which the Minister of National Security echoed after Joseph's body was discovered and images began to flood digital feeds.

Such moves, especially in light of developments in other parts of the region, are raising concerns about the new challenges activists may face as speech is increasingly policed by ‘cybercrime legislation’.

I will survive my grief, amen.
I have run into the darkness and arrived in the morning still living, amen.
I have made my home anywhere I still have a name, amen.
I swear that they cannot kill us all
amen.