After Planting the Caribbean in Our Collective Imagination, Sir Derek Walcott, ‘One of the Great Poets of All Time’, Has Died 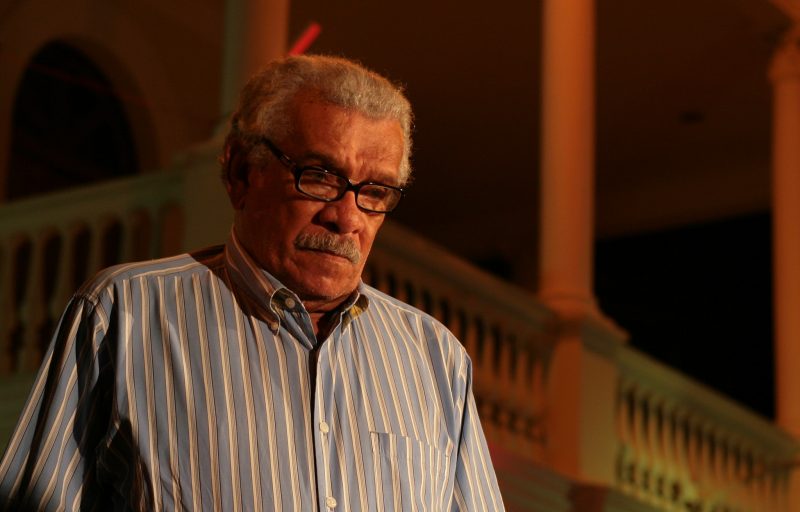 Derek Walcott, winner of the 1992 Nobel Prize in Literature, the titan who planted Caribbean poetry deep into our global literary consciousness, has died at his St. Lucia home today. Walcott was 87.

The Bocas Lit Fest, the largest literary festival in the Anglophone Caribbean, tries to capture Walcott’s enduring legacy in this official statement:

Walcott has been an overwhelming presence for three generations of Caribbean writers, and his influence is manifold. He was a master of the language, and proved beyond doubt that English is the property of no single nation or culture. He had a fierce and almost religious devotion to the landscape of his native St. Lucia and the broader Caribbean, which he immortalised in his lines and metaphors. He believed it was the job of poets to give names to the places, people, and things which history had rendered anonymous, and he emboldened other poets to do the same.

[Walcott] showed that even the most humble village on a tiny island on the fringes of the world could be a place of epic beauty and significance, written into his poems.

His masterful epic poem ‘Omeros’ is the embodiment of that and is one of the great works of world literature. He challenged orthodoxies and wielders of power, throwing down the gauntlet to younger writers.

Above all, he was the living proof that one of us — born in tiny Castries, educated in Kingston, living and working in Port of Spain — could become one of the great poets of all time, writing from the circumstances of everyday life.

In addition to the Nobel Prize, Walcott was awarded a 1981 MacArthur Foundation ‘genius’ award; the 1988 Queen’s Gold Medal for Poetry; the 2004 Anisfield-Wolf Book Award for Lifetime Achievement; the 2011 T.S. Eliot Prize; the 2011 OCM Bocas Prize for Caribbean Literature, among a litany of other accolades.

He self-published his first book of poems at age 19, with financial support from his mother to cover the costs of printing. His most recent work, ‘Morning, Paramin’ (Farrar, Straus and Giroux, 2016) was a collaboration with Scottish painter Peter Doig, marrying poetry with painting. It was critically acclaimed by The New York Review of Books’ Julian Lucas as work that uplifts Walcott’s eternal concerns of reclamation, re-visioning and the astonishment of regarding Caribbean vistas:

The poems are suffused with twilight, but the dominant register is celebration, delight in the fresh eyes of a painter whom Walcott addresses much as Shakespeare does the young man of the sonnets: with an injunction to preserve beauty in the world, to produce and reproduce, perhaps even to inherit.

The region’s scholars, students, readers, playgoers, poets and educators have been plunged into mourning. A profusion of tributes on social media and in traditional news outlets has echoed forth, underscoring the influence of Walcott’s body of work to individuals, organizations, movements and courses of study.

In an official tribute, The Poetry Society quotes Karen McCarthy Woolf’s review of ‘Morning, Paramin’, which describes Walcott’s legacy as “one that has enriched the language and discourse through which the reader might embrace the region’s history and resilience as a hybridised environment.”

Outside of the region, plaudits from the international writing and reading community are also pouring in, focusing on the collective mastery of Walcott’s language; the dedication of his investment in Caribbean poetics; the breathtaking range of his devotions to rendering a landscape and the people within it.

The Guardian’s official obituary quotes Walcott’s own words about his artistic and personal self-perception to galvanise the rootedness of the poet in his particular, unapologetic moorings:

The division of black theatre and white theatre still goes on, and I don’t wish to be a part of any one of those definitions. I’m a Caribbean writer.

Walcott's career was not without controversy, however. His candidacy, in 2009, for the prestigious post of Oxford Professor of Poetry, came to an abrupt end after sexual harassment allegations from more than two decades earlier were brought to the attention of the university. The woman who eventually secured the post resigned mere days into her tenure when it was revealed that she had been the whistleblower.

As tributes to Sir Derek Walcott’s life, work and legacy continue to flood global message boards, online forums and the public sphere, mourners are encouraged to take his books down from their shelves, and open them to their most beloved poems, celebrating in verse the sublime and majestic presence of Walcott, irreducible by death.