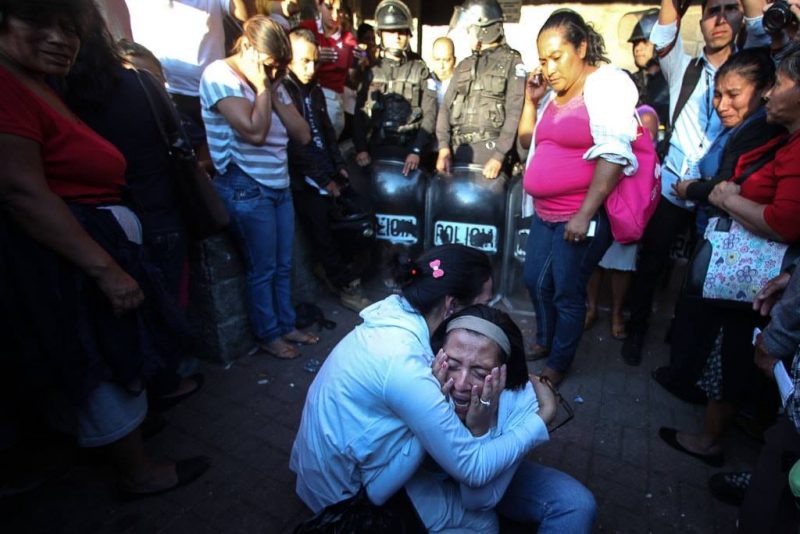 Relatives cry outside the Safe Home on March 8, 2017. Photo by Carlos Sebastián for Nómada. Used under a Creative Commons license.

Dozens of girls died tragically in a fire on March 8 at a state-run home for children on the outskirts of Guatemala City. The night before, the girls were locked in their dormitories after a failed escape attempt. The next morning, mattresses were set on fire in protest against the lockdown, but the flames spread and consumed the entire wing of the building, killing at least 41 children and adolescents.

According to the online news site Sin Embargo, “For years, minors have alleged that they were victims of physical, psychological, and sexual mistreatment during their stay at the shelter.”

Ironically, the deadly fire occurred on International Women’s Day, as feminists around the world protested violence against women, and the Ni Una Menos (Not One Less) swept Latin America.

Eyewitnesses told Sin Embargo that the foiled escape attempt on March 7 was hardly the first time anyone at the shelter tried to flee. The most recent attempt set off a chain of events leading to the tragedy.

According to a blog post shared on Medium by Community Press KM169, conditions in the shelter were abhorrent, and many of the minors living there were regularly trying to break out:

At least 50 girls and boys attempted to flee on March 7 from the inaptly named hellhole “Virgin of the Assumption Safe Home.” They were driven to desperation by the beatings, the confinement, the sexual violence, the forced abortions and medicines, and all types of torture. Many of them were pregnant. This is not new: it’s been reported since 2016.

The residents fled, but most were quickly captured again. Guatemalan President Jimmy Morales sent more than 250 police officers, including riot police, to stay overnight at the shelter and keep everything “under control.”

On March 8, “the girls rebelled and set fire to their mattresses so they would be allowed out of their rooms. They were not allowed out, and they were burned to death,” according to local news site Nómada.

The fire began in the early morning, and the monitors, those in charge, and the hundreds of police did nothing more than frighten and threaten the youths in other units who wanted to help. They denied entry to emergency response personnel, according to a firefighter official, and relatives outside who sought to enter were blocked by riot police. No one could do anything.

We asked for help and one of the agents said, “Let these wretches suffer; if we'd been ready to flee, we could endure the pain.”

At a press conference the day after the blaze, the authorities presented their version of events. President Morales was conspicuously absent, away “attending to urgent matters of state.” A government spokesperson claimed that the girls placed under lockdown were being punished for extortion and conceal weapons. “We exhausted all dialogue with the girls,” the spokesperson explained, suggesting that their true grievances weren't torture but bad cafeteria food. “There was no negligence.”

Nonetheless, President Morales later admitted that the state had failed to “pay enough attention” to the situation at Virgin of the Assumption, and warned that a similar tragedy could strike again, if officials make the same mistake in the future.

Hell is not a metaphor

The children living at the Virgin of the Assumption Safe Home are there under court order. The website Nómada says many of them belonged to gangs and committed felonies, while others were simply abandoned in the street. These minors were exploited for robbery, prostitution, and even murder. Some disabled children were handed over to the state after their parents decided they couldn't meet  their special needs.

“There were more than 800 babies, children, and teenagers living in a place with a 500-person capacity,” Nomada reported.

[…] the narrative developed for this case is a narrative of prisoners, not of defenseless children. “They escaped, they were recaptured.” If they are in a confinement center, they cannot escape, but they talk as though they are dealing with prisons.

We want us alive

Twelve hours after the fire, mourners in Guatemala City's Constitution Plaza lit 770 candles, representing the number of women killed annually in the country. During the lighting ceremony alone, three more girls wounded in the fire succumbed to their burns and died.

The deaths at the Virgin of the Assumption Safe Home have become a national tragedy in Guatemala, where activists have mobilized vigils, artwork, protests, and social media to maintain the public's attention and overcome the paralyzing indignation now felt widely across Guatemala. 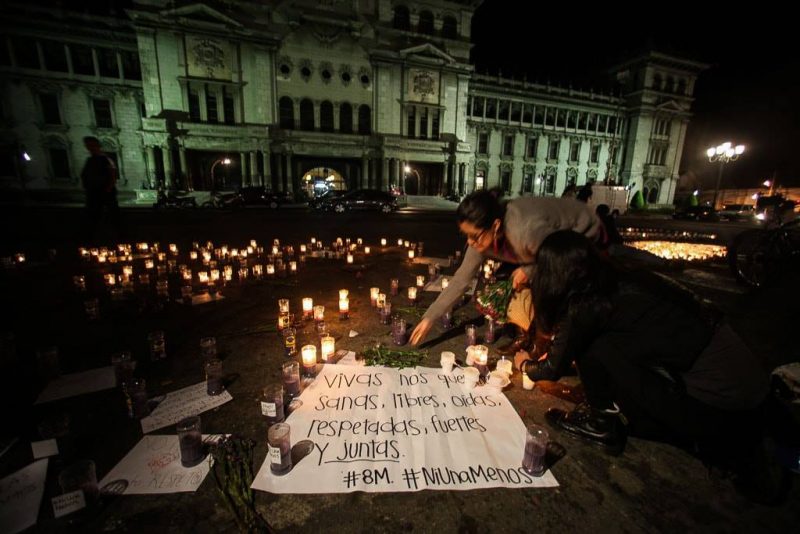 Women light candles on March 8, 2017, in Guatemala City. Photo by Carlos Sebastián for Nómada. Used under a Creative Commons license.

Here are some protest-inspired tweets:

Justice. Guatemala Is Mourning. It was the State.

Girls of Guatemala. Guatemala Is Mourning. Justice.
On the picture: Guatemala, Justice Now! This country kills us, silences us, rapes us, blame us.

The monstrous indifference: I can’t get the girls of Guatemala out of my head. It continues to cause me heartache. They rape them, they mistreat them, and when they protest, they burn them alive. They were killed by machismo, classism, and racism, and every day they’re killed by indifference. […]