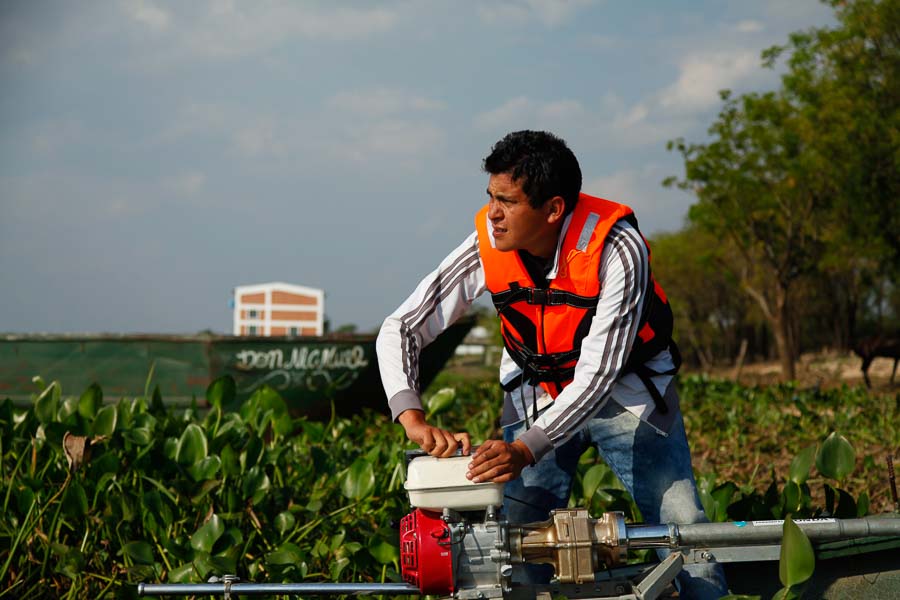 In his struggle to access a university education, Christian Quiñónez was in two serious accidents on his way out of the Paraguayan Chaco. Photograph by Nicolás Sáenz, taken with permission from the website Kurtural.

The series Cows That Fly, Schools That Crumble, published by Paraguayan economic and cultural news site Kurtural, explores the ways in which Paraguay's education system fails students. The latest installment, written by Patricia Benítez, is republished on Global Voices in two parts. The first details the circumstances around public and private education in Paraguay and the historic events in Puerto Casado. The second continues below.

Five years ago, Christian Quiñónez, who risked his life on more than one occasion in order to attend university, survived a car accident on his way to the capital. At the time, he was pursuing a business administration degree at the Autonomous University of Asunción. It was a distance-learning program, but it required him to take exams in person. For this reason, every two months, Christian had to travel the more than 600 kilometers to Asunción. On one of these trips, the truck he was travelling in flipped over and fell into a roadside ditch.

According to the police report, the accident was caused by the extremely poor state of the road. Christian escaped unharmed, but Marisela Ramírez and the driver, Freddy Fernández — the son of Justo Fernández, the then governor of the Alto Paraguay department — were both killed. Two other passengers survived but were seriously injured: Fernando Fernández, the governor's other son, and Gleisy Ruiz. All of them were university students. 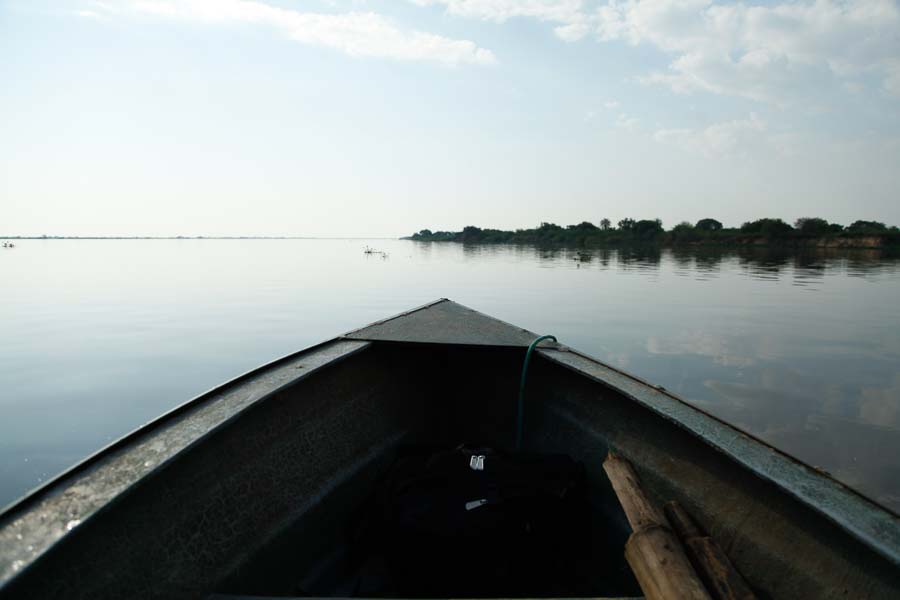 The launch of a boat to Vallemí with favorable weather conditions. It is not always so pleasant. Photograph by Nicolás Sáenz, taken from the website Kurtural, used with permission.

The company Carlos Casado SA began to decline in the 1980s when tannin stopped being profitable, but it didn't completely shut down until between 1996 and 2000. Christian doesn't remember any of this; at the time he was only a boy, barely older than his son Jonás.

After almost a century of exploitation of quebracho forests and the incursion of cattle farming, the firm left the country. Before doing so, they sold nearly 500,000 hectares of land and everything on them — ex-factory structures and facilities, animals and people — to the Sun Myung Moon company, a self-proclaimed South Korean messiah. Moon has already passed away, but in 2000 when the sale was made final, he headed up the Unification Church, known also as the Moon sect. Thus, the land, the city, its inhabitants and the indigenous community passed into the hands of a new owner.

In 2005, a large part of the population of Puerto Casado marched 250 kilometers to Asunción to claim rights to their lands. In 2012, the National Institute of Rural and Land Development declared Casado a “colony by law,” after an attempt to expropriate the land was reversed through a complex judicial process. Through this decision, the population could no longer be evicted from some 35,000 hectares, including the urban center. However, the fight to legitimize their right to live there is not over.

During the Chaco War (1932-1935), when Paraguay and Bolivia were at war, Puerto Casado was the loading and unloading zone for the Paraguayan combatants who also used the area's factory and train workshops. More than 80 years later, Christian and Éver Pereira leave from this same place to study. Only Luis Pereira stopped going to classes. Éver said:

He always wanted to be a soldier. I pushed for him to just study anything. But after what happened, he quit all together.

However, both Éver and Christian aren't going to give up this fight. Not now. Not in the middle of their journey, they say, not even after getting to know the fury of the river. Migrating to Vallemí, perhaps to Concepción or another area to avoid the risk of the daily boat trip is not an alternative that either one of them will consider. They are stopped by their jobs, their families, their connection and commitment to a community that has other shortcomings, like its lack of hospitals and navegable roads. Christian said:

If I leave and study somewhere else, I'll easily get used to that environment and I won't want to come back to Casado. And if there aren't professionals in the community, there will never be a university.

He not only thinks of his own future, but also the future of his children James and Jonás. “The authorities in the capital need to start looking over here. From those big buildings they definitely can't see that the Chaco doesn't have anything. Those buildings are blocking their view. They need to go a little farther up and look towards our region,” he said.

He is referring to to the shiny buildings that make up the landscape of the “new economic center in Asunción” as it is called in the capital, where skyscrapers grow at the pace of the real estate boom. This is a parallel universe for Christian, one in which “you get on a bus with air conditioning and you travel peacefully, you even have time to think why someone else is driving,” he said with a smile that stands in contrast to the tough life in the Paraguayan Chaco. Where he lives, the year is divided into a rainy season and a season of drought. When the earth isn't dry and cracked, it's the isolation caused by the lack of roads that drowns you.

Seven years ago, travelling from Asunción to Puerto Casado on rainy days took 36 hours, maybe 48. You had to go by bus until the port in Concepción, little more than 400 kilometers from the capital. Later, you had to take the Aquidabán, a boat that left port once a week for Vallemí. The new route that connects Concepción with Vallemí allows people to take a daily bus from the capital and arrive to their destination in nine hours, or vise versa. Christian, for example, makes the trip every time Jonás and James need to go to the pediatrician. Thus he reflected:

I envy the opportunities they have on the the other side of the river. For us, this is another world.