A Syrian Activist's Japanese-Language Message to the People of Japan 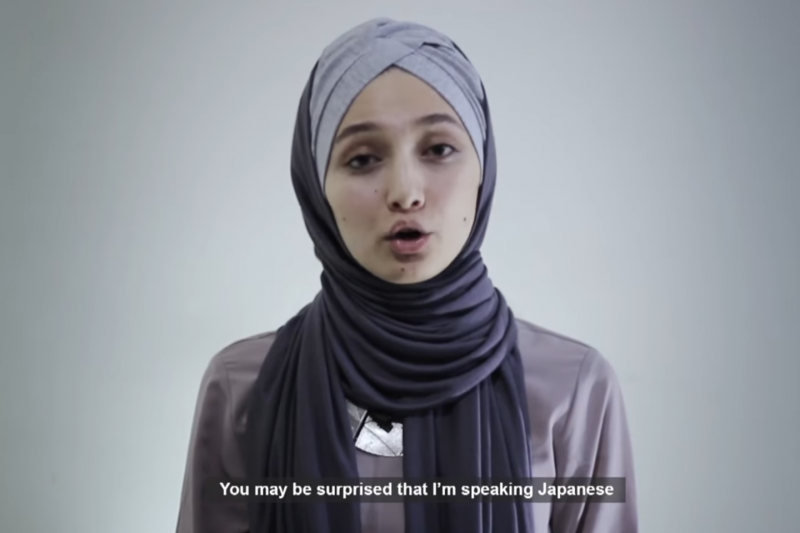 Screencap from “A Message from Syria to the Japanese people,” by Lina Shamy.

As forces loyal to President Bashar al-Assad besieged Eastern Aleppo in the latter half of 2016, many Syrian media activists based there took to social media to counter the narratives being pushed by media outlets that support Assad and the Russian intervention on his behalf.

One of those activists was 26-year-old Lina Shamy. Using Twitter, YouTube and other social media platforms, Shamy explains what is happening in Syria in a variety of languages. In her latest video, Shamy uses Japanese, which she learned as a university student, and addresses a specific audience: the people of Japan.

In the video, she starts by thanking “the Japanese people and their government who gave a lot of support to Syrians through the United Nations” as well as for “welcoming 150 Syrian citizens as students which is a great opportunity for Syrians to pursue their academic ambitions in life”.

Syria is witnessing a revolutionary call for freedom and dignity for its entire people. The dictatorship regime is continuing to kill whoever has participated in this revolution from the Syrian people with brute force. Besides that, the dictatorship regime called foreign militias and armies from other countries to intervene in order to help with suppressing this revolution of freedom and dignity.

She then asked the people of Japan to resist normalization with the Assad regime:

Please do not support the Assad administration to set up facilities of water and electricity because most of the money that is supported is not being used to fix or build lifeline facilities by the Assad government. They are using it to bring fuel to the tanks that are killing the Syrian people. In addition to this, even though they're using part of the money to repair the facilities in Damascus city where Assad and his regime are based, the Syrian people do not know that the money is coming from Japan or where it is being directed.

While this may seem like an odd request, it's important to note that on March 14, the United Nations’ Independent International Commission of Inquiry on Syria revealed that “Syria's air force deliberately bombed water sources in December, a war crime that cut off water for 5.5 million people in and around the capital Damascus.”

Pro-Kremlin and pro-Assad media outlets have published stories accusing “rebels” of poisoning these water sources, but the UN said “it had found no evidence of deliberate contamination of the water supply or demolition by armed groups, as the Syrian government maintained at the time.”

Speaking to Global Voices, Shamy said that she made the video to try to influence public opinion in Japan:

Whenever I meet someone from any country I ask them what do people in general think about what's happening in Syria? How does your government see or deal with the Syrian government? What do they tell their people? How do they justify their relationship with Assad? I'm curious because I know how important the role that is played by international community, people and governments in supporting or not supporting the Assad regime.

She said she learned Japanese through a cultural center at the University of Aleppo:

There was a Japanese center in my university. Once, there was a festival at the center to introduce people to Japan and Japanese culture and I really liked it. I soon found out that there were classes at the center to learn Japanese and that a new class was about to start within days. I was excited and I started. I finished level one and was very happy with the experience, so I continued for two years until I reached level 5.

Her relationship with Japan didn't end there:

I have some Japanese friends since I was studying the language and I also have some Syrian friends who study and live in Japan.

The language and the culture was something different and unique I enjoyed every moment of my Japanese classes. It's a difficult language, especially the kanji [logographic Chinese characters that are used in the modern Japanese writing system], but it is also very satisfying and entertaining to finally become able to draw and realize what these figures mean.

As for why she did this video, it all started with meeting journalist working “for one of the most famous channels in Japan and East Asia”:

We talked and I realized that the image they get has many things missing. Sometimes they fell for the propaganda that Assad was promoting, that Assad is fighting terrorism. I felt that if I'm able to do something about it, that it's my responsibility to do so.

Her video was viewed around 30,000 times on Facebook and 10,000 times on YouTube. But interestingly, there was a noticeable difference in public reactions between the two platforms.

While those on Facebook were mostly positive with messages of support in Arabic, English and Japanese, she was mostly down-voted on YouTube with, at the time of writing, over 100 “up votes” and almost 800 “down votes.” The comments on the video on YouTube were mostly pro-Assad or pro-Russia. Others there were bigoted remarks about her headscarf or anti-Semitic statements warning of the dangers of multiculturalism.

But Shamy preferred to focus on the reaction of Japanese people to her video which she told Global Voices were mixed but mostly supportive:

The engagement was very good, though not everyone agrees with me. A lot simply had no idea but said that this motivated them to question what they were hearing in formal media and to go and look for themselves

Japan traditionally accepts a very low number of asylum seekers. In 2015, for example, Japan received a record 7,586 applications for refugee status, with only 27 applications granted.

As Shamy mentioned in her video, however, in May 2016 the Japanese government said it would accept 150 Syrians over five years, treating them not as refugees but as exchange students. In contrast, fellow Group of 7 (G7) member Germany received 442,000 individual first-time asylum applications in 2015 and plans to resettle 14,300 in 2017. Canada has accepted little over 40,000 refugees from Syria as of January 2017.

The move to modestly increase the acceptance of asylum seekers, along with newly implemented private sponsorship rules based on a Canadian model where community groups can band together to bring refugees into the country, comes as Japan recently forcibly repatriated 43 asylum seekers.

It's hard to define exactly why Japan resists settling refugees and asylum seekers. There are some reports the Japanese government does not regard requests for asylum as genuine, and are instead made by people wishing to work in Japan for better pay than they get in their homeland.

While it is often argued Japan regards itself as ethnically homogeneous and closed to outsiders, there are increasing calls to open Japan up to immigration in order to deal with a shrinking population. While Japan is a major donor to the United Nations High Commission for Refugees (UNHCR), both the United States and Germany, G7 countries that both accept large numbers of refugees, donate more.

There is also the possibility many Japanese citizens are simply unaware of their government's policies towards asylum seekers. YouTube vlogger That Japanese Man Yuta recently conducted on-the-street interviews, all subtitled in English, with a cross-section of Japanese people, asking them the question: do they want refugees in Japan?

There was surprise that Japan accepted just 27 refugees in 2015, while allowing an additional 79 to remain in the country for humanitarian reasons. The interviews provide insights into how average Japanese people regard refugees, and also debunks some of the misconceptions about Japan's history of accepting refugees–Japan admitted more than 11,000 refugees from Vietnam, Laos, and Cambodia between 1975 and 2005.

Broadcasting the plight of average Syrians to a global audience

Shamy's Japanese-language video was not her first foray into social media. Originally from Idlib, she distinguished herself not only for tirelessly updating her followers on the latest developments via her Twitter account, but also for being one of the few female voices that non-Syrians and Syrians alike heard from within besieged Eastern Aleppo during the last siege.

Interview about the evacuation of #Aleppo today morning with TRT worldhttps://t.co/92p3f3bJRf

Last thing we did at home before leaving
“Great Syrian Revolution” “ppl wants the fall of the regime” “The revolution of abandoned people” pic.twitter.com/pZXsR66ewy

In a viral tweet released on December 12, 2016, just nine days before she and her husband Yussuf were forced to leave Aleppo, and fearing a massacre, Shamy called on the world to act:

She continued her activism even after leaving Aleppo:

Shamy, who is now back in Idlib, wrote a moving piece for the New York Times on January 20 entitled “I Went to Aleppo to Study. I Left With a Convoy of Refugees.” She also authored a powerful photo-essay for the Huffington Post entitled “These Are The Moments Of Aleppo’s Demise That I Will Never Forget” in which she narrates life in Aleppo since 2008 when, at the age of 18, she moved there to study architecture at the University of Aleppo.