Poly, the Platform That Wants to Teach You Every Language in the World

A version of this post was originally published at r12n.

Wikitongues founders and directors Daniel Bogre Udell and Frederico Andrade have embraced an ambitious mission to document — and teach — every language in the world. And by “every language,” they really mean every language, including those estimated 3,000+ languages that are unwritten, the world’s 300+ sign languages, and even constructed languages (conlangs) like Esperanto and Lojban.

Skepticism about such grand claims is natural, but it’s worth reviewing the project’s work over the past several years, work that may yet warrant such optimism. I recently spoke with them about the development of their language documentation and learning platform called Poly.

Wikitongues is a Brooklyn-based nonprofit that emerged from Bogre Udell and Andrade’s shared interest in languages and technology. Bogre Udell, who is also a Global Voices contributor, was raised in a monolingual English household, but his interest in languages was sparked by living in a minority language community. He spent time in Spain, first in Aragon and later in Catalonia. Learning Catalan greatly affected his perspective on languages, and on the world: “I started engaging with Spain in a very different way from most foreigners, and I was engaging in Europe in a way that most Europeans don’t.” Andrade was raised in a bilingual English-Portuguese household, and later picked up several other languages. The founders shared a profound respect for the value of linguistic diversity, and were frustrated that the issue does not loom larger in the public sphere.

“Children are taught how many countries there are, and [are] taught the regions of their own country,” Bogre Udell notes. “No one’s taught that there are 7,000 languages. We still see in the media today that linguistic discrimination is still pretty commonplace.” This shared passion for language — paired with their backgrounds in technology and design — provides the theoretical drive and practical foundation for Wikitongues.

In fall 2012, Bogre Udell began video-recording short oral histories of his neighbors in Brooklyn, asking his subjects to speak in their native languages. New York is perhaps the most linguistically diverse city in the world, with more than 700 languages spoken there. Bogre Udell quickly acquired a diverse range of videos which he began posting to a YouTube channel: “In just a few weeks we were able to record something like 40 different languages.” Somewhat to his surprise, he found the channel quickly attracted a global audience.

The following spring, Bogre Udell’s friend (and fellow Parsons School of Design alumnus) Andrade joined the effort, and they continued recording videos in New York, and also traveled to collect recordings from communities throughout the US. As the project gained attention and popularity, offers to collaborate began coming in from all over the world. Wikitongues eventually incorporated as a nonprofit, and has coordinated a careful effort to document language via short videos, with a primary focus placed on endangered languages. As of this writing, the Wikitongues YouTube channel boasts 347 videos of languages from every human-inhabited region of the world.

The latest video, for example, features speakers of Mirandese, a minority (but co-official) language of Portugal with a few thousand speakers.

Documentation is a critical step in the revitalization process of a language, but the path from documentation to producing new speakers is seldom direct. In the late summer of 2014, the Wikitongues founders came across an article describing the work of Marie Wilcox. Wilcox, born in 1933, is the last fluent speaker of Wukchumni, one of many endangered indigenous languages of present-day California. For over a decade, Wilcox had worked with her daughter Jennifer Malone and others to document her language, beginning by jotting words in notebooks and on the backs of envelopes. Bogre Udell and Andrade were deeply moved by her dedication to her work.

Through their encounters with people such as Wilcox, the pair also realized that few speakers of endangered languages would be willing or able to participate in a similar dictionary-creation project. “This super-laborious process, over the course of years and years and years,” as Andrade puts it, was simply out of reach for most people.

For Wikitongues to make the step from being a language documentation initiative to a language revitalization initiative, they would need to help speakers like Wilcox, and the speakers in their videos, connect more intentionally with language learners. “We brainstormed a little bit and tried to figure out what would be a useful, lightweight, trivial interaction that could really amount to some good progress” towards goals of both documentation and revitalization, Andrade explains. They envisioned a solution that was accessible, user-friendly, and would be of use to people who hoped to document their language and pass it on to new speakers. Work on Wikitongues’ solution to this challenge, Poly, began in late 2014.

With support from a successful Kickstarter campaign last year, Poly has been under rapid development, and recently delivered on a promise to release a functional version of the app on International Mother Tongue Day. Poly is oriented towards the creation of “books,” which can comprise vocabulary, phrases, and expressions between an arbitrary language pair. If you have been itching to create a Lakota-French (or Dothraki-Klingon) phrasebook, a few clicks on Poly can provide an appropriate development environment. In the demo below, Andrade can be seen creating an English-Brazilian Portuguese phrasebook.

The interface is simple, responsive, and easy to use. While Poly is open for use by any type of teacher or learner and for any language, Andrade and Bogre Udell hope that it will serve as a useful tool for people like Marie Wilcox, allowing for a straightforward documentation process that can be directly oriented towards learning.

Poly has been an open source project since its inception, “just because private repos [on Github] cost money,” Andrade jokes. Poly is built on a foundation of open-source technologies: the frontend is React, the backend is Rails and PostgreSQL. While Andrade suggests that being open source is somewhat symbolic at this early stage, Poly has already attracted “hundreds of thousands of dollars of development time” from a growing community of developers. “Because we are a nonprofit and a very, very strongly mission-driven one,” Andrade explains, “we’ve been able to gather the support of a lot of developers.” He describes shepherding a collaborative development process as “magical.”

Wikitongues has also developed an open approach to the data they are curating. With guidance from Wikitongues co-director (and “open source, open standards, open data and localized content” advocate) Alolita Sharma, the organization is working towards making all of their content available under open licenses such as Creative Commons, including video content, video metadata, and Poly’s language data.

There are challenges in dealing with data produced by members of many different communities — some endangered language communities are wary of exploitation, and many have differing conceptions of their languages as cultural or intellectual property. “The problem with some of the big open source projects or free knowledge movements is there’s a certain kind of dogmatism about what the licensing needs to be,” Bogre Udell says. While Wikitongues’ goal is openness, it recognizes that a bespoke data licensing approach may be necessary in some cases. The organization is actively working to navigate this complex ethical, legal, and cultural space. “If we can demonstrate that certain communities have been successful within our [open data] model, we can reach out to other people who are reluctant and say: ‘look, these are the benefits,’” explains Andrade.

The open source ethos of the project goes beyond code and data. Bogre Udell notes that the scale of what Wikitonges is trying to accomplish — to work with every language community in the world — requires a certain openness. According to Andrade, “One of our deepest philosophies as an organization is that we work with communities. We don’t go and record videos to ‘bring back.’” In all of their hundreds of videos, Wikitongues hopes to convey that there is a real person speaking who is willing to discuss their experience in their language. 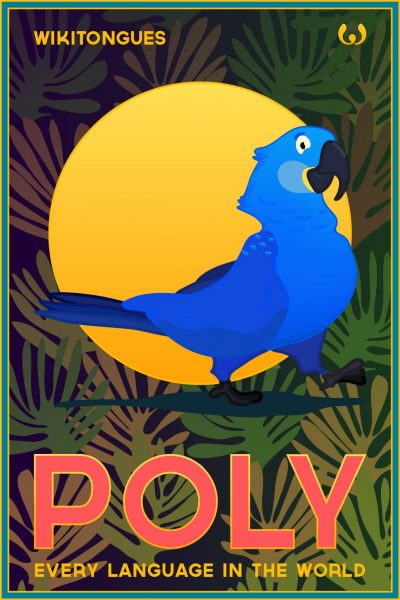 All the languages in the world

Initiatives like Wikitongues are vital in the race to revitalize endangered languages. As I’ve previously noted, developing digital language resources for a language can help ensure the next generation has access to it, and it is clear that most of the hard work is going to occur outside (or at best, alongside) the commercial technological mainstream. In conversations with major tech companies, Bogre Udell found limited enthusiasm for engaging with languages of fewer speakers. “They want to make sure that they reach the 400 or so largest languages,” he notes. “We had a conversation with someone at Google.org and they were very explicit that languages with fewer than 10,000 speakers were not of interest.” With Poly, Wikitongues continues on its journey to develop an open global community focused on languages.

“As a language documentation effort, we are the only one that’s trying to work with every language in the world,” Bogre Udell notes. “Nobody else has that interest.” This orientation and mission directly inform the development of Poly. “We want to create tools that are that are useful to the public,” he argues. “We want to be more useful to the speakers of the language than the linguists, because the speakers are the ones who need it.”