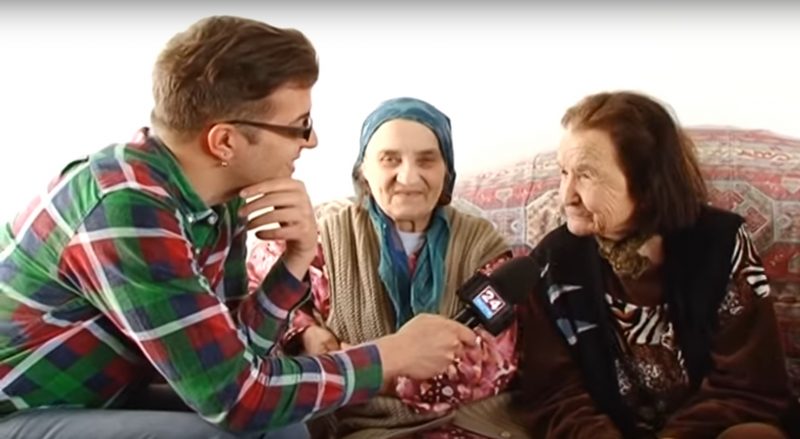 Vanja Lazarova, a singer of Macedonian folk songs, died on Sunday, March 12 in Skopje at the age of 86.

Lazarova enjoyed a distinguished career, but towards the end of her life she had fallen into obscurity and was living with few resources — until she became the focus of an online initiative that helped her achieve the status of National Artist. The effort not only helped Lazarova, but also represented an important victory for Macedonian citizens against a government that didn't take kindly to criticism.

Lazarova was born in 1930 in the village of Stracin, and worked in the Opera of the Macedonian National Theatre and the National Folk Music Ensemble Tanec. She performed internationally, including playing the Royal Albert Hall in London for Queen Elizabeth II and Prime Minister Winston Churchill. She was the first Macedonian singer to make records for labels such as Polygram and Philips.

Last farewell to the irreplaceable Vanja Lazarova. She sung our destinies in a single breath.

She will be remembered for her performances of songs such as “I Was Born in Hardship” (the 1980s video below is from the archive of the Macedonian Public Broadcaster).

She contributed to the soundtrack of the most successful Macedonian movie, “Before the Rain,” with the band Anastasia. The movie won the Golden Lion award at the Venice Film Festival in 1994 and was nominated for an Academy Award for Best Foreign-Language Film. The director, Milcho Manchevski, stated that the music in the movie was one of its essential elements.

During the last period of her life, Lazarova was living in a private nursing home off of a meager monthly pension of less than 170 dollars. She wasn't receiving any benefits from the copyrights on her music, and the owners of the nursing home were covering her expenses.

In May 2014, journalist Ognen Janeski discovered Lazarova's plight. His report, aired by independent TV 24, did not draw much initial attention, but when Janeski published it online May 13, it caused wide outrage on Facebook.

Overnight, more than 8,000 people joined the Facebook page “Support for Vanja Lazarova.” By becoming fans of that page, they also supported its request that Lazarova should “receive the status of National Artist and a national pension.” Several celebrities also voiced public support, most prominently musician Zlatko Origjanski who worked with her on “Before the Rain.” In less then a day, the number of “signatories” reached 10,000 and would nearly double by the end of the effort.

The shamed authorities reacted quickly, sending the minister of culture to make an urgent visit at the nursing home. During the visit, the minister also held a press conference saying Lazarova's request for a National Artist pension, which had been previously denied, would be reconsidered.

The government then bestowed Lazarova with the 11 October Award, given on the eponymous national holiday commemorating the uprising against fascism in 1941. The award was necessary in order for Lazarova to meet the conditions of the National Artist status and receive the associated pension.

Today (May 13, 2016) is the second anniversary of the action for Vanja Lazarova. This was the first successful citizen initiative in six years. Love!

After the success of the initiative, several other causes also used Facebook pages as petitions in a similar manner.

Lazarova spent the final two years of her life in the same nursing home, dealing with issues related to her advanced age and frail health. Some of her recordings were republished during this time, and the state sponsored a documentary film about her.

Do you recall how Vanja Lazarova was left on the margins until Ognen Janeski discovered her and made an interview? Rest in peace, Vanja.

Journalist Ognen Janeski continued to serve the public interest as a journalist and activist. His work exposing the inadequacies of the system reportedly made his family a target of revenge by the ruling party. He said the Ministry of Culture denied funding to his parents, who had been working in a public cultural institution in the city of Prilep, after the conclusion of the action to support Lazarova. He also reported that his sister suffered demotion in the (partially government-owned) Macedonian Telecom, immediately after protests took place demanding someone be held responsible for the death of 9-year-old Tamara Dimovska, who died awaiting medical care in February 2015. Janeski had co-organized the protests.

The ruling party also targeted musician Zlatko Origjanski with various forms of pressure after he spoke out on Lazarova's situation and after numerous other occasions in which he publicly decried abuse of power and corruption by the authorities.

More recently, as part of the ongoing campaign of intimidation against civil society organizations, independent journalists and other critics, Origjanski's home was targeted by unknown perpetrators who vandalized his front door with insulting hate speech stickers on February 27. He reported the attack to the police, but the case has not moved forward. A week later, on March 3, a group of unknown persons came to his door with a video camera and hurled abuse at him, calling him a “traitor.” Pro-government web portals then propagated the video as proof of “the anger of the People.”