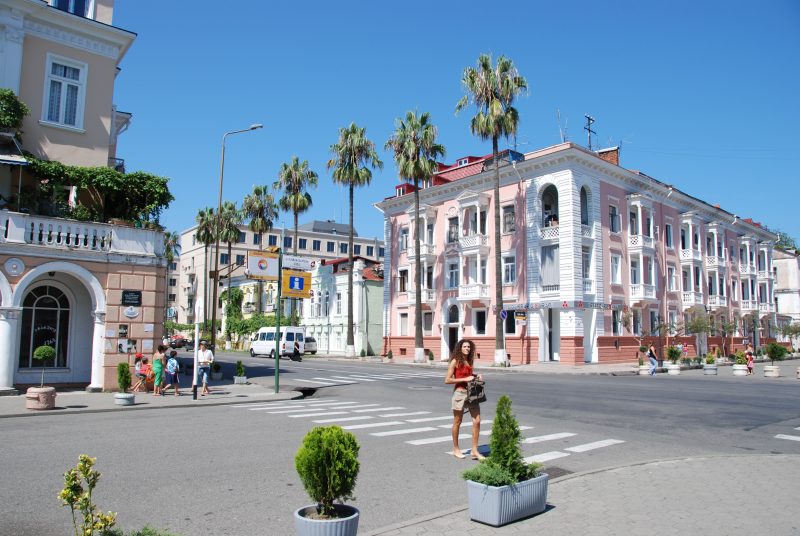 Streets of Batumi. Public domain image used by Wikipedia and produced by Oley24.

The riot, which saw protesters use rocks and fireworks as projectiles in a pitch battle with riot police, stemmed from a man refusing to pay a parking ticket, but seems to have been rooted in broader dissatisfactions.

Authorities announced that the unrest has since been quelled.

This is how the main entrance of #Batumi police station looks like now. Sad to see the City ‘destroyed’ in a blink of an eye #BatumiRiots pic.twitter.com/cRLV72iqFL

Batumi is the administrative capital of Adjara, an autonomous region that speaks a dialect of Georgian and has a large Muslim minority. An attractive town on Georgia's Black Sea coast buoyed by over a decade of steady investments, Batumi has a relaxed feel and boasts its own distinctive cuisine. Even the boat-shaped Adjarian khachapuri, or cheese bread, is different from the cheese bread originating in other parts of Georgia, echoing versions of the Turkish pide in form but featuring an egg floating on top the cheese.

Political frustrations appear to have been on display during the March 12 rally that descended into violence after the man that received the parking fine, Jimi Varshanidze, was detained. One journalist based in the capital Tbilisi linked to footage of the rally in which local Batumi residents appeared to be asserting their local identity in a riposte to comments attributed to the city's police chief that Batumi Muslims were “Tatars”.

Residents have in recent days called for the removal of the police head, who hails from Gori, the town of late Soviet dictator Josef Stalin's birth, some 200 kilometres away.

‘Aren't we Georgians? We Are! Aren't we Adjarians? We are'; ‘We are Adjarian Muslim Georgians’ https://t.co/X5GMXWUlVc #BatumiRiots

Photo from a small-scale demo in front of #Batumi police station on 9 March. The caption reads: ‘Adjarians are not Tatars, Mr Policemen’ pic.twitter.com/71zOOmv9aa

As to how the unrest began, Georgian watchdog Democracy and Freedom Watch reported:

The riot began after a man refused to accept a fine for parking in the wrong place and was detained by police after arguing with them.

Accounts of what happened next vary, but what is known is that the conflict escalated and that six men were arrested.

Later, hundreds of mostly men gathered outside the police station demanding the release of the arrested men and the resignation of the police leadership.

Riot police was called in to defuse the situation. Around midnight local time there were reports that the police were using tear gas against the protesters.

A video which appears to have been filmed from inside the police station shows a rain of rocks hurled at the building and at a column of retreating riot police carrying shields.

Varshanidze has since been released. He said he parked his car opposite a drugstore and was fined by police when coming out of the store, before being detained for arguing with the officers.

According to Democracy and Freedom Watch, “opposition politicians claim people in Batumi lately have grown irritated by the ‘unreasonably’ high fines they are being issued by the police in the Black Sea resort city.”

#Batumi: Even if encouraged by outsiders, riots that agressive are very rare, seem to display genuine discontent with, but not only, police

This is likely reference to former Georgian leader Mikheil Saakashvili and his United National Movement that failed to regain control of the parliament in polls in October that some had predicted would see the latter make a dramatic return to Georgia from his current digs in Ukraine.

The battle between the Georgian Dream, represented by Kvirikashvili and bankrolled by billionaire Bidzina Ivanishvili on the one hand, and Saakashvili and the UNM on the other, has gotten hotter in recent times, after a controversial court ruling handed over the opposition Rustavi-2 channel that favours UNM rule to previous owners more likely to toe the government line.

Batumi, however, has its own local politics fairly distant from the tug-of-war taking place at national level. While the Christian and Muslim communities there have co-existed peacefully for years, there are some signs of tensions, notably surrounding the construction of mosques and the pervasive economic influence of Turkey in a region once under Ottoman control.

While the city has emerged as a tourist destination and regional gambling hub, thanks partly to significant Turkish investments, residents working and living beyond the bubble of these growing industries have little to celebrate.