Jaysh Al-Islam Is Leading Peace Talks in Geneva, While Clamping Down on Speech in Syria's Eastern Ghouta 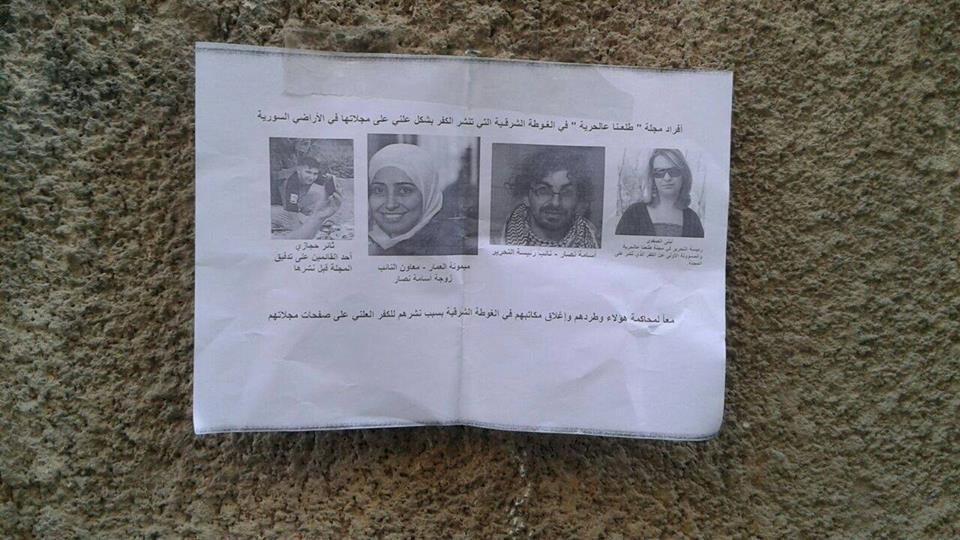 A photo in Ghouta inciting hate against writers in Freedom Raise Magazine. It reads: “Writers of ‘Freedom Raise’ magazine in Eastern Ghouta that explicitly promotes heresy on its land.. Together to dislodge these people; send them to trial, and shut their offices. Photo Source: Yassin Al Haj Saleh

Jaysh Al Islam, a Syrian opposition group that runs the Eastern Ghouta region a stone's throw away from the capital city Damascus, has shut down a magazine and five well-known civil society organisations, according to activists working in the region.

The clampdown comes after ‘Rising for Freedom‘ Magazine (طلعنا عالحرية), also known as RFM, published an article titled, “Carry Me, Dad”, which was deemed offensive and blasphemous by some protesters, who stormed and vandalised the magazine's offices. The protesters demanded that the magazine's staff be put on trial and that their offices be closed. Jaysh Al Islam soon complied. But their crackdown is broad and extends to organisations that have no affiliation with RFM.

As news of Jaysh Al Islam clamping down on the magazine and civil organisations in Eastern Ghouta spread, Waseem Al Ahmad, a Syrian activist based in Damascus, wrote:

Don't kill the revolution and the civil work in Ghouta. This is one of the few areas which we brag and talk about to the world as a place that witnessed the emergence of our peaceful revolution, fighting for freedom and justice.

Assad and his father ruled all of Syria for 45 years through heavy censorship, mass surveillance and systematic human rights abuses, before widespread protests erupted in 2011 demanding reforms at first and then regime change. Assad refused to step down, sending Syria into a six-year conflict that has killed almost half a million people, displaced half the population and splintered control over the country.

In response, RFM announced that it will suspend its activities within Syria until further notice:

In the wake of recent developments that followed the protest against our publication of ‘Carry Me, Dad’ by the author Shawkat Garzeddin, in issue number 86 of [RFM] we have decided to suspend our activities within Syria and stop distribution pending the decision of the court.

Besides Rising for Freedom Magazine, the organisations impacted by the clampdown are: Violations Documentation Center, The Day After: Supporting a Democratic Transition in Syria, Local Development and Small-Projects Support, and the Hurras Network for Child Protection. These are all well-known organisations operating in the Eastern Ghouta region, especially within Douma city, which is 10 kilometres from Damascus.

According to activists, the Local Coordination Committees (LCC), a network of approximately 70 coordination groups that play a key role in organising anti-regime demonstrations and disseminating information about the revolution, has also been ordered to cease operations, too.

The broad clampdown comes after 70 protesters showed up on the morning of Tuesday, March 7, 2017 outside the offices of RFM, threatening to break in. Jaysh Al Islam's police refused to intervene, and asked employees to evacuate their offices instead.

According to a statement released by 16 Syrian organisations, including the five organisations that have been shuttered, this is what happened next:

At 4 PM, when the staff of the NGOs left, they encountered protesters with melee weapons. Soon after, a small group arrived with signs and tools for vandalizing, and they subsequently stormed the building, vandalizing furniture and office equipment, tearing down the NGOs’ signs and posters inside their offices. They wrote threats on the doors and outside the building before fleeing.

A day later the Jaysh Al-Islam-controlled Prosecutor General in Douma issued a statement that ordered RFM to close, along with the five other organisations, many of which have no affiliation with RFM:

All offices of the Rising for Freedom Magazine, Hurras Network for Child Protection, and any affiliated organisation or magazine will be closed until they face a judicial hearing.” The decision also instructed “to send a statement to the local administration in Douma to close the offices and seal them shut, and write a report” about the situation.

Syrian activist and member of ‘Hurras’ Aous Al Mubarak explained on Facebook, that despite Hurras insisting that it has no ties to the magazine, the general prosecution would not change its mind:

General prosecution of Jaysh Al Islam has received a litigation from the “Committee for Propagation of Virtue and Prevention of Vice” to shut down the offices of Hurras for an article published in Freedom Raise magazine. We said the magazine is not part of the network explaining that ‘Kite/tayyara waraa’ is our affiliate magazine, but in vain. Not only did they close the network's office but the Center for Development and Documentation of Violations as well. The opposition against all these institutions comes due to clear political reasons. They have long disliked our presence and the principles of our work; freedom, justice, equality,division of power, and general elections. They disfavor our success but today they decided to end everything. They no more approve of diverse political orientations, those that do not conform with their ideals. Congratulations for seizing control of Syria, the society and every single being in this country.

Highly controversial among activists, Jaysh Al Islam is considered by many to be behind the kidnapping of well-known activists Samira Al-Khalil, Razan Zaitouneh, Wael Hammadeh and Nazem Hammadi, collectively known as the ‘Douma Four‘, on the evening of December 9, 2013, in Douma, Eastern Ghouta. The four are still missing to this day. At the time, Jaysh Al Islam was led by Mohammad Alloush's cousin, Zahran Alloush, until the latter's death in an airstrike in 2015.

My problem with the opposition delegation to Geneva can be summarized by the following: Currently I am being represented, against my will, by Muhammad Alloush, whose Jaysh al Islam proudly put civilians in cages as human shields and have a long history of kidnapping and harassing activists. While Alloush is in Geneva pretending to speak for Syria’s revolutionaries, his thugs are attacking the very revolutionaries he should be speaking for. Today his loyalists shut down the offices of civil society activists because his group didn't like what the activists wrote in one of their articles.

She then went on to say that:

There will be no peace without accountability for all war crimes committed by all sides of the conflict. The people living in Eastern Damascus under regime bombs an the oppressive rule of Jaysh al Islam do not have the option of speaking out. Those of us who are safe in the west have a responsibility to not let a war criminal represent the voices who called for democracy and freedom of speech. This is just one more mistake committed by our political opposition. We need to reclaim our revolution and not allow the Alloush group to intimidate the political delegation the way it has oppressed the people of Damascus.

I stand with @freedomraise
Hands off Media centre of ‘Rising for freedom’ magazine
Today closed with threats of detention in Gouta pic.twitter.com/BY369dFdiJ