Malaysian Aid for Rohingya Refugees Reaches Bangladesh and Myanmar, But How Much Can it Do? 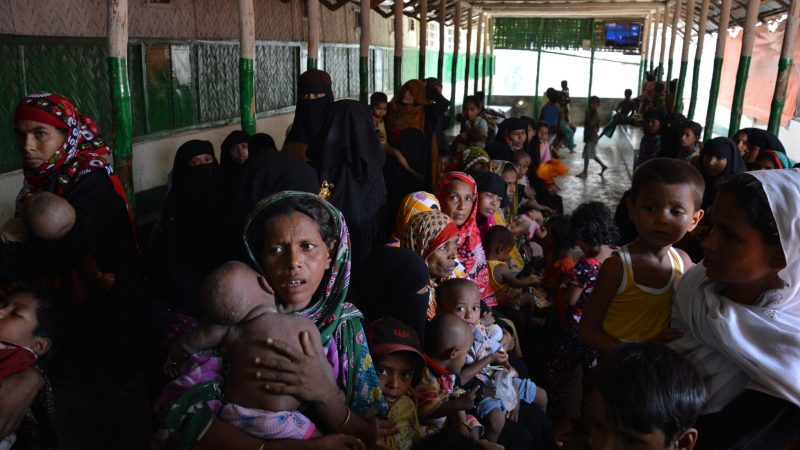 Undocumented Rohingya refugees in Bangladesh in a clinic funded by the European Commission. Image via Flickr by EC-DG-ECHO. CC: BY-NC-ND 2.0

A Malaysian ship carrying aid for the Rohingya community was granted access by Bangladeshi authorities after they initially refused it entry last month, but the long-term future of the refugees who have fled Myanmar to reach the South Asian country is anything but clear.

Nautical Aliya, an offshore support vessel transporting aid workers and emergency supplies, docked at Chittagong port on February 14 to provide aid to about 70,000 Rohingyas who fled to Bangladesh from Myanmar after the Myanmar army began an operation in the Rakhine state where the persecuted Muslim minority is concentrated.

These refugees are a fresh addition to the more than 140,000 Rohingya who were already living in Bangladesh, having escaped previous waves of state persecution in Myanmar. The ship, nicknamed the ‘food flotilla’ stopped by a Myanmar port to offload some supplies, but the volunteers were not allowed to visit the Rohingya in the country.

October atrocities against the Rohingya

The Rohingya Muslims are a stateless Muslim group numbering about 1.1 million from Rakhine with smaller refugee communities in Bangladesh, Thailand and Malaysia.

The issue of Rohingya refugees has been a serious one for Bangladesh for nearly four decades since the all-powerful military in Myanmar began an anti-Rohingya campaign that declared the minority illegal immigrants (see Global Voices reports here and here). Undocumented Rohingyas living outside the refugee camps in Bangladesh have settled in the towns of Cox’s Bazar and Teknaf.

In October last year, things got worse for the Rohingya after armed insurgents attacked several border police posts, leaving nine police personnel dead. Myanmar forces retaliated by killing dozens of “alleged insurgents”. Unsurprisingly, given the history of the bloody conflict in Rakhine, the counter-insurgency operation saw reports of wide-scale human rights violations on the part of the army, including incidents of extrajudicial murder, gang rapes, arson and infanticide.

The most recent wave of Rohingya Muslims to reach Bangladesh did so during this spate of violence in which villages were burnt and, according to an UN report, more than a thousand Rohingya were killed.

The ‘food flotilla’ humanitarian mission was organised by non-governmental organisations Kelab Putera 1Malaysia (KP1M) and the Malaysian Consultative Council of Islamic Organisation (MAPIM) and consists of 195 volunteers from more than 30 local and international NGOs from Malaysia and other countries. They carried about 2,300 tons of food, medicines, daily essential goods, clothes and blankets. Most of the funds were raised by a range of charity activities across Malaysia.

The ship first stopped at Yangon port in Myanmar on February 8 and offloaded several containers of relief the following day. A select group of 29 Flotilla volunteers were allowed to disembark from the ship to meet local officials.

The government of Myanmar did not allow the aid workers to travel to the restricted Rakhine area and assumed responsibility for distributing the aid. Myanmar also initially refused to allow the food flotilla into its waters and has barred it from sailing to Rakhine’s state capital, Sittwe.

The #nauticalaliya‘s crane about to lift one of the containers from the ship onto #yangon port. #rohingya #aid #myanmar pic.twitter.com/1nRksnZDkN

After that ‘Nautical Aliya’ started towards Bangladesh and made a brief stop at Saint Martin’s Island before reaching Chittagong.

According to original plan, the Fotilla team wanted to deliver the aid to Teknaf, the entry point for most refugees reaching Bangladesh. Teknaf was ruled out by Bangladeshi authorities, however, because of safety factors and difficulties accommodating large ships at the port. Finally, on February 14, the ‘Nautical Aliya’ docked at Chittagong Port in Bangladesh.

The vessel was escorted by two Bangladesh coast guard boats and a Bangladesh Navy vessel. Only 25 volunteers were allowed to visit the Rohingya refugee camps in Bangladesh.

Rohingya refugees gather for aid supplies as the crew of the #NauticalAliya distributes food and hygiene supplies at Kutapalong refugee camp pic.twitter.com/0smREYC64L

On February 23 Nautical Aliya returned to port Klang in Malaysia.

Bangladesh has refused to register the latest influx of Rohingya as refugees, however, effectively waiving any legal obligation to them. The government maintains that as Bangladesh is overpopulated with little or no form of social security for its own citizens, it simply is not in the position to host refugees indefinitely. There are also reports of a controversial government plan to relocate tens of thousands of Rohingya refugees to an to an uninhabitable remote island in the Bay of Bengal.

In 2015, the Thai and Malaysian navies both turned away refugee boats carrying Rohingyas fleeing Myanmar, who had to return to Bangladesh. Indonesia took some refugees but they were kept in detention camps without permission to work, and the Southeast Asian country subsequently refused to accept any more.

Experts have accused the Association of Southeast Asian Nations (ASEAN) of failing to tackle the crisis adequately. Until countries take action to halt the persecution of the Rohingya in Myanmar and accept refugees in greater numbers, the embattled group will be forced to depend on International relief and initiatives like the Food Flotilla for day-to-day survival.

“You can’t have these people float around until they die.” ASEAN, take in Rohingya Muslims! http://t.co/7KmZSsY40y pic.twitter.com/rV3PdB5txT