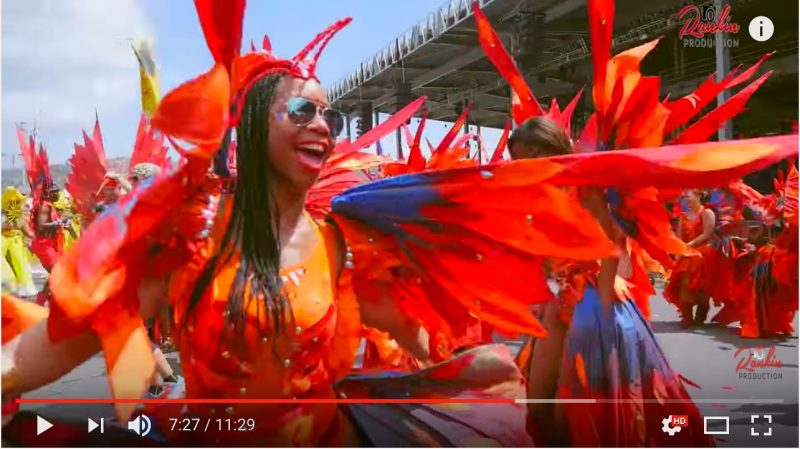 Screenshot of a YouTube video featuring the Carnival 2016 Parade of the Bands in Trinidad And Tobago.

Now that the dust of Trinidad and Tobago Carnival 2017 has settled and commentators have conducted their own post-mortems, one issue remains at the cross section of Carnival and the social media landscape — live streaming.

The question of whether it is legal to live stream content like concerts and other paid-for events came to the fore after one netizen, Theresa Coutain, live streamed Machel Monday, arguably the most popular concert event of the Carnival calendar.

The 2017 edition of the concert was particularly star-studded, featuring artists belting out the season's greatest hits as well as old-school dancehall and dub icons. Among soca lovers who couldn't afford the high ticket prices, Coutain rapidly became “Saint Theresa” in lieu for bringing the noise to their computers and mobile phones.

But in an industry that relies on ticket sales and paid broadcast rights to get paid, are live streamers actually breaking the law, or are they off the hook if they do not make a profit from it?

One intellectual property lawyer, Nigel Trancoso, jump-started a lot of public discussion when he said in a newspaper interview that the most the promoter could do in the case of Machel Monday was write Coutain a letter advising her about intellectual property issues — including composer and performer rights — as well as “the moral issues surrounding the streaming”.

He maintained that as long as the streamer was motivated by a “love of culture and a desire to put it on display for the world”, there are no current legal consequences under Trinidad and Tobago's existing legislation, unless the promoter can “prove a causal link between the streaming live and a reduction in the patronage” at next year's event.

The Intellectual Property Office of Trinidad and Tobago subsequently issued a press release to counter this argument:

Anyone rebroadcasting an entire live simulcast is committing copyright infringement and can be subject to substantial fines. It matters not whether you are doing it for ‘for money or for love’. There is no distinction at law. […] The best approach in determining whether your broadcast is violating copyright law is to simply use your common sense. If you paid to enter a venue and watch the content, that content is likely protected by copyright. Good examples include If you live stream an entire movie in the theater, or you are at a music concert for example, you are likely violating copyright law by streaming the event for others to ‘take a view’.

Other experts concur. Dr. Emir Crowne, a barrister and senior lecturer, at the University of the West Indies in Jamaica, submitted a post to the popular website Wired868, saying:

A national newspaper carried a story that suggested that live streaming Carnival events—the Machel Monday concert in particular—was not illegal. That is simply untrue. […]

First, live streaming an entire concert, or a substantial part of it, is an infringement of copyright. The profit motive is immaterial in terms of the actual infringement.

Section 21 of Trinidad’s Copyright Act, among other things, expressly gives the performer the exclusive right to broadcast and rebroadcast his/her performance. […]

Indeed, small snippets of the broadcast undoubtedly qualify under the ‘news reporting’ provisions of the Copyright Act. But that’s it. There is absolutely no exception, or limitation, in our intellectual property laws that would sanction the live streaming of the entire Machel Monday concert.

Attorney and Global Voices contributor Jason Nathu also weighed in on the topic on his blog:

Social media platforms like Facebook, Instagram, Twitter and Periscope now give users the options to broadcast ‘live’ to their timeline. While this live streaming option has been praised in providing unique perspectives for current events and breaking news, the ability to ‘go live’ has provided more opportunities for infringement of copyright laws and the showcasing of illegal content.

Because the technology is available to almost everyone does not mean that persons can willy-nilly use their smart devices to broadcast anything that they want.

Generally the organizers of an event would take measures to restrict access to the venue in which the event occurs. Media companies are awarded licences to cover such events, whether that coverage be live or delayed. Patrons to such events are sold tickets, which are subject to terms and conditions. The ticket forms the basis of a contract between the organizer and the patron. A patron who therefore uses his device to film or broadcast the event to a non-patron would almost certainly be in breach of that contract, and thus the organizer would be entitled to take legal action […]

Many netizens who watched Coutain's livestream were under the impression that she was not actually at the venue, an assumption which Global Voices is not able to confirm. However, Nathu's post also addressed the topic of streaming from an approved live stream source:

The Act also affords protection to authorized broadcasters of live events against any rebroadcast or communication to the public of its broadcast. Therefore, someone who streams the live broadcast of any event from a television station is guilty of an offence under the Act.

As far as national festivals like Carnival go, however, there are exceptions. Nathu says that in unrestricted venues — such as the Grand Stand of the Queen’s Park Savannah for the Parade of the Bands — live streaming is allowed:

Carnival masqueraders may therefore ‘go live’ once they are in any public place to display their revelry. Of course, persons should be bear in mind that there may be limits on what can be broadcast, such as content that violates the current law as it relates to obscenity and public order.