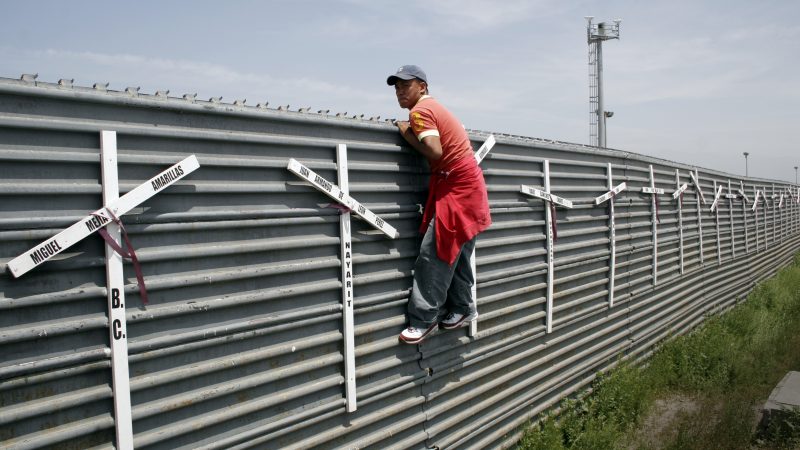 A migrant trying to climb over the US-Mexico border fence at the Tijuana-San Diego point. The crosses remind of those who died attempting to pass. Photography by Tomas Castelazo, taken from Wikimedia Commons, licensed under the Creative Commons Attribution 3.0 Unported license.

Desperate migrants currently pay thousands of dollars to smugglers so they can trek 50 to 80 miles along remote dangerous desert corridors between Mexico and the US that are designed to kill.

Every year, thousands risk the journey to improve their lives or flee the violence in their home countries.

Many migrants never make it across.

Over the years, thousands have gone missing, leaving their families searching for clues online of what went wrong.

The US south-western frontier is a “vast graveyard of the missing,” according to the No More Deaths / No Más Muertes, an Arizona-based advocacy group.

A spokesperson for the group says that tens of thousands of people have disappeared since the 1990s. More than 6,000 people have been found dead over the past 16 years attempting to enter the US from Mexico along the desert, according to US border patrol agents.

These migrants face potential risks from their smugglers, US border patrol agents, kidnappers, armed American anti-immigration activists and lethal snakes, spiders and scorpions. They could also die from dehydration in a desert that reaches 110°F (43°C).

The migrants that die often leave trails of clues behind, like the clothes they were wearing, or the few possessions they had on them. Here are examples of a digital platform and a Facebook page that are connecting families of missing migrants in Mexico, Honduras and Guatemala to digital photographs of these clues.

Bracelets, buckles and the clues they left behind.

I Have A Name/ Yo tengo Nombre is a database that seeks to facilitate relatives of missing migrants. The database can help families figure out if their loved ones were victims of crime in Central America, whether they were kidnapped in the south of Mexico, detained in the north, or were able to reach safety. 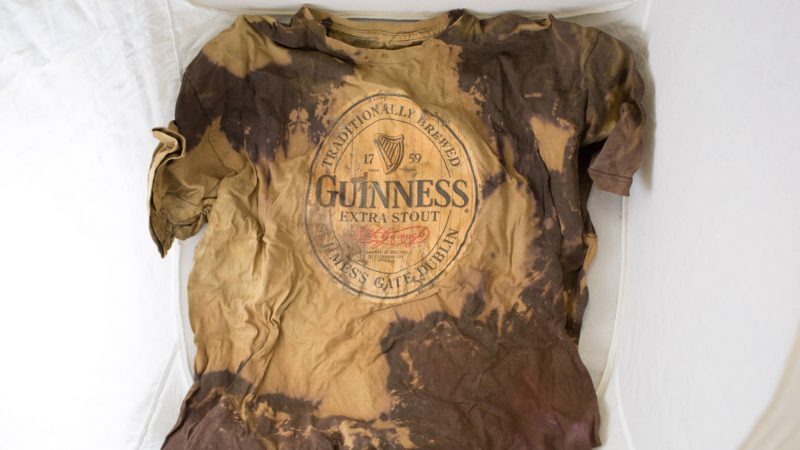 Case 0409: “Brown T-shirt with a Guinness logo. White Nike brand shoes 8.5 US size. Red underwear, Funk brand, size XL. Found on Dos Palmas Ranch.” The contact information can be found by following the link. Photograph taken from the website and used with permission.

The digital project contains photographs of personal items discovered among the belongings of migrants found in south Texas. This is the initiative of the Austin-based nonprofit news organization Texas Observer, which, with the permission of forensic experts, photographs clothes, rosaries, jewelry, belts, shoes, combs, bracelets, hats, backpacks, buckles, and anything that could help identify who these people are.

Since the 1990s, most of America’s 2,000-mile frontier with Mexico has been increasingly aggressively defended by drones, cameras and sensors, a 700-mile fence and a heavily militarized US border patrol. The official border patrol strategy created in 1994, ‘was to create conditions that would cause more migrants to die in hostile terrain, in order to deter other migrants from making the trip,’ according to the Guardian.

When migrants make the difficult physical and financial decision to cross the desert border, they usually rely on smugglers to help them navigate dangerous desert trails. Many times, smugglers deceive their “customers” by telling them that the passage is safe, but in reality, the terrain is treacherous, there are vigilant border patrol agents, extreme weather conditions and water shortages.

The Washington Office on Latin America (WOLA) has pointed out that the increase in migration is a humanitarian crisis, not a threat to the US national security. 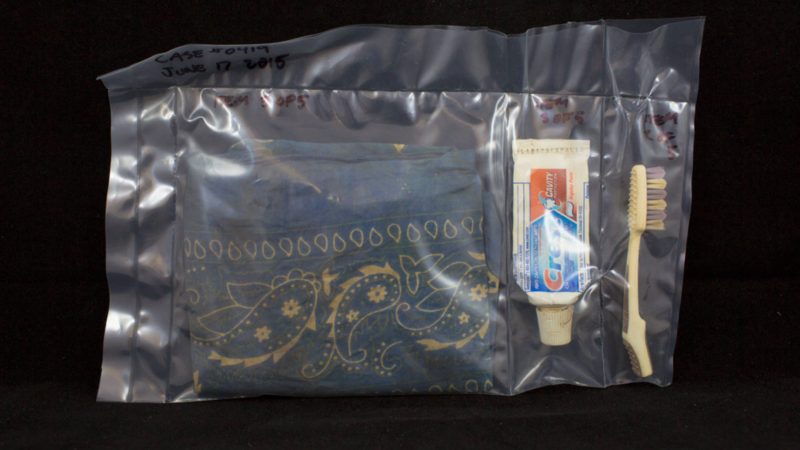 Case 0419. “Blue handkerchief, toothpaste and toothbrush. The remains are thought to have been found in Jim Hogg County but buried at Sacred Heart Cemetery in Brooks County and exhumed on 23 May 2013.” The contact information can be found by following the link. Photograph from the website used with permission.

There is also a Facebook page called “Desaparecidos y sin reclamar en la frontera” (“Missing and unclaimed at the border”) with the same aim, and it includes photographs of tattoos that facilitate the identification of bodies. On the Facebook page timeline you can find  messages like this:

FAMILY MEMBER LOCATED. THANK YOU FOR SHARING !! (…) Body found on Tuesday, 3 January 2017 in Rio Grande, Hidalgo, Texas. The body showed moderate signs of decomposition, and it was determined that he was an adult male, about 30 to 40 years old. “

Searching for clues, families often share photographs and information of their missing loved one on this Facebook page. This testimony can be found at the end of one of the cases:

One more case closes, and a family is grateful to all of you for sharing this case so that the remains of their relative will reach Mexicali in Baja California (Lower California state).

In October, through the photographs that were published, the family was able to identify some tattoos of their relative, and I had the opportunity to talk to them, and regrettably everything matched, but we waited until the family finished the formalities and could identify him. During that same month they confirmed that it was Emilio Hipólito, but they asked for time to mourn and to wait until they receive his remains. In the last month they communicated and confirmed that his remains are already resting in his native Mexicali, and they wanted to give the case closure by thanking to each and every one of the people who shared the case, since, if it were not for them, maybe today they would still ask where he is.

Emilio Hipólito left his house with a dream but never returned, his mother was still hoping that he would return, but, as the days went by, they wondered what had happened to him.

Today he rests in peace because he was fully identified and his remains were already repatriated to his native Mexicali. His brothers and family are very grateful, especially his mother, because he lived with her. He is survived by his daughter, rest in peace Emilio Hipólito.

Thank you, my friends! It's all thanks to you, keep sharing cases, your help is essential!

Emilo's family was grateful to find out what happened to him, and to be able to bury him and his American dream in Mexico.