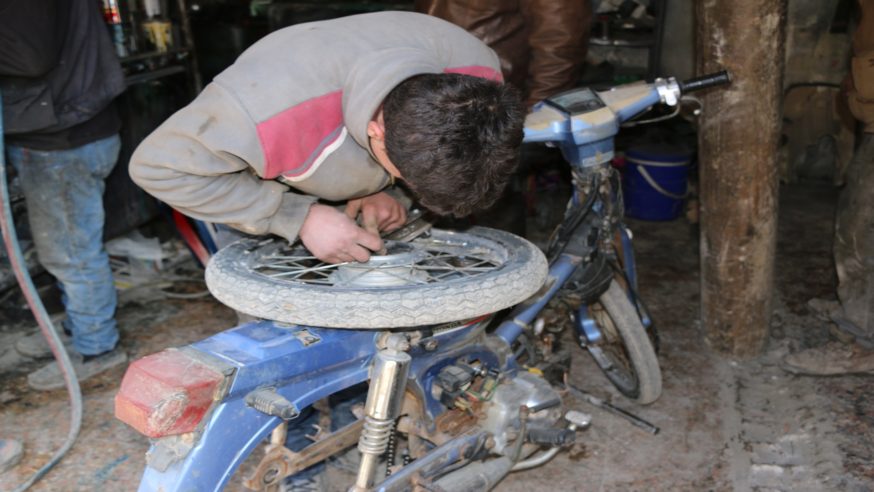 This story was originally written for Syria Untold [1] by Huda Yahya [2], a journalist and activist from Idlib's countryside who holds an Islamic degree (ijazah) in History. It was translated by Naziha Baassiri [3]. It is republished here as part of a partnership agreement.

It wasn’t easy for Masaab al-Bakur, 12 years old, to take the decision to quit school and find a job in order to help his widowed mother with the ever-growing living expenses in their home town of Maarat al-Numan in southern rural Idlib.

Masaab, who lost his father in 2015 after he was hit by shrapnel during an air raid, is just one of many Syrian children who have gone into the work at an early age. Coming from poorer households, these children usually lost the main breadwinner in their family at a time when the living conditions radically changed in Syria due to the ongoing war. As a consequence, they were gravely affected in terms of a limited education and an unhealthy personal development.

Masaab – who works at blacksmith’s workshop – told SyriaUntold: “The [high] cost of living is what made me get this job. Although it’s hard and is low-paid, it’s still better than nothing.” The 12-year-old with a tired but innocent face added happily: “I can buy two bags of bread everyday with my daily pay.”

Masaab, who works for eight hours a day, is responsible for turning the generators on and off as well as for welding metal pieces together. His daily pay is 250 Syrian Pounds (SYP), roughly $0.5. Like him, many of the children have to put up with the injustice of being paid lowly wages that do not reflect the hard work they put in every day. Their employers often take advantage of their young age and their inability to fight for their rights.

Abu Ahmad (pseudonym), 40 years old, is the owner of the workshop where Masaab and other children work. He explained to SyriaUntold that Masaab’s low per diem is due to his young age and the fact that he is still learning the ins and outs of the profession. “Masaab’s desire to work here and his need for a job are [the reasons] I hired him. I will double his pay as he becomes more proficient and can perform well at work.” 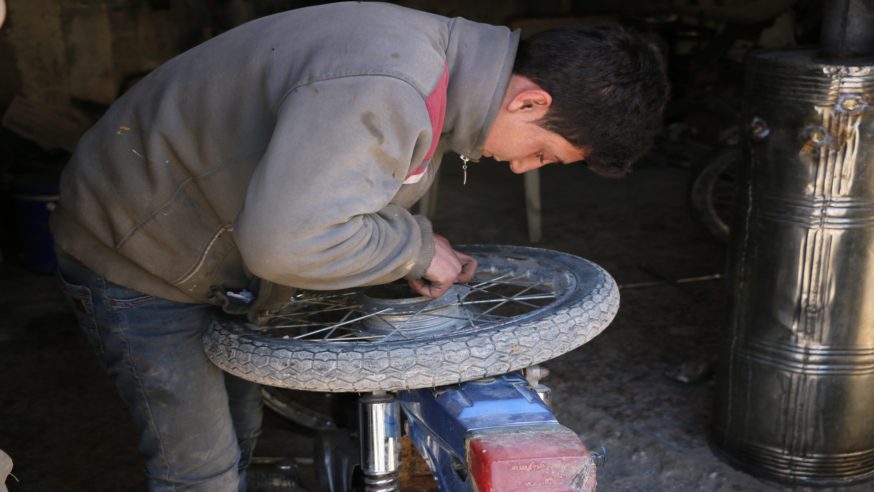 Umm Masaab, 35 years old, is sad to see Masaab quit school, in which she said he was a top student. However, she explained that Masaab’s work is worth it given it helps with the family’s living expenses. She added that, at the end of the day, he would have apprenticed for a good job. Yet given the harsh reality of being a mother of four children with no degree and no work experience to help her keep her family, Umm Masaab found no other solution to her dilemma. Masaab is her eldest and Muhammad, her youngest, is only three-years-old.

The family’s monthly living expenses amount to $100 at least. Umm Masaab is not able to afford the additional costs of Masaab’s school expenses — from stationary, clothes and a daily allowance that would amount to $100 per year — even when the school fees themselves are low. With four children to support, things look bleak indeed.

The low numbers of students enrolled at schools in rural Idlib is mainly due to regime and Russian air raids that target educational institutions. Consequently, the rates of child labor in the area spiked as the war raged on, with the Russian interference only adding to the misery.

Hamed al-Bayush, 14 years old, who also quit school, explained to SyriaUntold: “There is no way I could still be in school and that’s for two reasons: first, I need my own allowance for which I can’t ask my poor father. Secondly, schools are not what they used to be.” What Hamed meant was that many teachers usually dismiss class as soon as they hear a jet fighter flying over, in light of the massacre that happened at schools in Hass [4] and many other villages. According to the 14-year-old, there is no point to education in the midst of fear and worry of yet another massacre. For him, work places are now considered safer, given that the regime is targeting schools.

Hamed works at a car repair shop. Despite it being a hard job, he says he is happy and content because, at least, he is now able to keep himself and sometimes even pitch in for his siblings. Children in rural Idlib have taken up many jobs, either selling on pavements, raising stock, farming, or apprenticing to be electricians, carpenters, and barbers.

Omar, 13 years old, and Zayd, 12 years old, are two brothers who sell houseware door-to-door. They are the sole breadwinners in their family of five after their father was arrested by the regime in 2014.

Their mother, Mariam al-Hasan, 39 years old, is saddened by her children working but said: “What can a woman like me do but send her sons to work?” referring to her back problem. “I can’t find any appropriate job in these harsh conditions, and if it weren’t for the money my children bring in, we wouldn’t survive.” 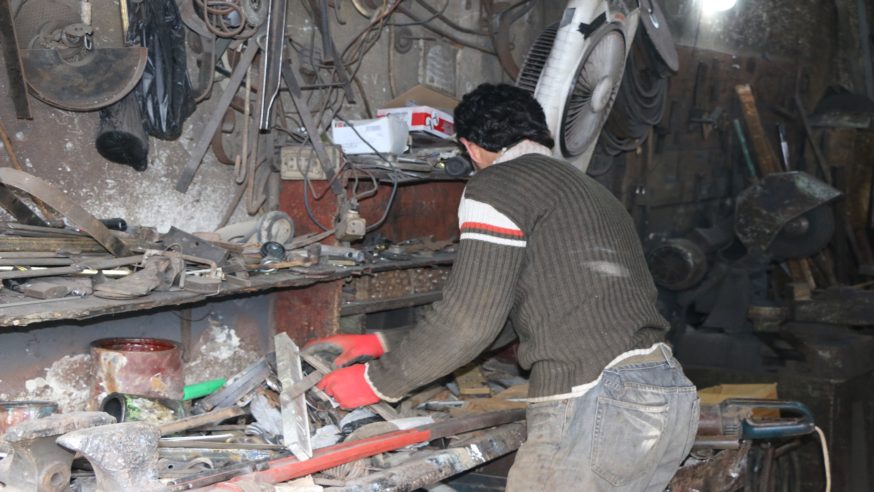 Without a doubt, there are now more job opportunities for children than there are for adults. Children accept less pay in comparison, and so, it has become commonplace to see child labor all over rural Idlib.

Amjad al-Salim, 31 years old, is a sociology graduate and currently works as a teacher. He told SyriaUntold that “this phenomenon has negative repercussions on society as a whole, but specifically on children.” He condemned the abuse of children, mainly by giving them jobs they are not physically and psychologically ready to perform. These jobs, he said, put a lot of strain on the child and threatens their health and safety; these are occupations that do not help evolve the child and get in the way of their education.

On the other hand, al-Salim said he has no problem with children taking on simple and easy tasks that do not strain the child and would still bring in a healthy income. “We are living hard times. It is war and it is merciless. Many women and children have been burdened with supporting families that have lost the main breadwinner. They have no choice but to work, and therefore, it is normal to see an increase in child labor in light of the absence of the concerned authorities.”

Ammar al-Suweid, 29 years old, is an engineer and a member of the local council in Kafranbel. He talked to SyriaUntold about what the local councils and civil society organizations could do to help with the increasing levels of child labor.

“There are some associations and organizations that provide some help to orphans to help them financially. But at the same time, poverty and need are aggravated with inflation and war. There is no way to absorb all the families that really need help.”

Psychological counselor Faten al-Suweid, who works for Syria Relief and Development [5], told SyriaUntold that child labor is destructive to the child on all levels. “A child loses their ability to distinguish between right and wrong, and they are increasingly aggressive due to the employer’s maltreatment […] When a child quits school, they lose their opportunity to an education and training that would ultimately negatively affect their creative abilities.”

According to the counselor, one can’t limit this phenomenon unless parents are aware of the long-term dangers of child labor on both the child and the society. To raise awareness, she suggested holding seminars, conferences and educational sessions such as those given by UNICEF in many regime-controlled cities [6], including Aleppo. Although not enough, al-Suweid said it would be an important starting point to fight against the widespread child labor epidemic in Syria.

Until UNICEF is successful in its efforts to end child labor, this phenomenon only seems to be on the rise in Syria. It threatens a whole generation with ignorance and a multitude of physical, psychological and social problems, which should bring the Syrian relevant actors together to tackle and stop the issue at hand.