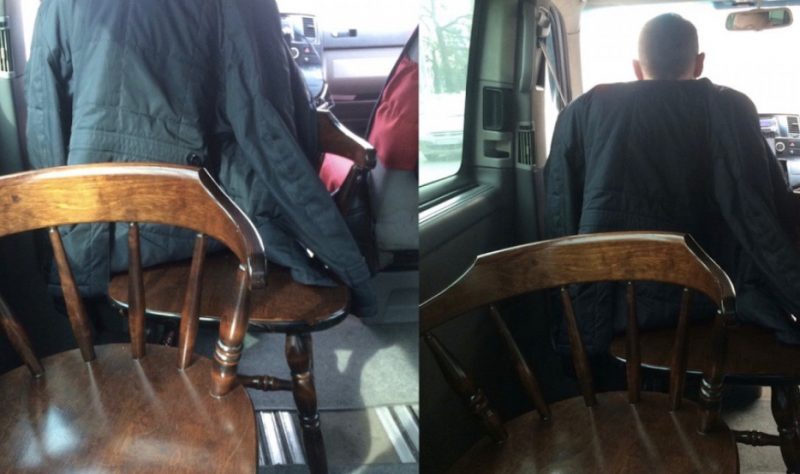 When a mother and daughter in Kazakhstan's largest city Almaty ordered an Uber taxi on March 6, they probably weren't expecting a glove-wearing chauffeur to show up behind the wheel of a limousine. But the idea that all the furniture inside the vehicle might actually be attached to it shouldn't have been too much to ask.

A photo taken by one of the pair and subsequently posted onto the Facebook account of daughter Darya, who uses the name Darya Catch on the social media service, shows two wooden stools passing for upholstery inside the minivan of their designated Uber driver.

Darya and her mother were seated opposite the shifting stools in regular car seats.

“But what if there had been four of us?” Darya asked in comments sent via Facebook to Global Voices. “Would two of us have had to sit on the stools?”

Darya's mother Marina said that the chairs “rattled around” during the ride, posing a safety threat. The driver joked that he could even fetch them a table if they wanted.

Uber's local press service told Tengri that “measures had been taken” regarding the driver, to ensure the “unfortunate” free-floating stool scenario did not repeat itself.

The press-service did not confirm whether the driver, who had a five-star rating, had been formally dismissed from the Uber network.

Uber is new to the Central Asian country, arriving in both the capital Astana and Almaty last summer. The app-based service “relies on smartphone tech as its dispatch and fee manager“.

In Kazakhstan it offers a happy medium between the most common means of getting a taxi in the country — flagging down literally any car and negotiating a fee with the driver on the spot — and the more expensive, but ultimately safer method of calling up licensed commercial cab firms.

For this reason the service has grown rapidly alongside its Russian app-based competitor Yandex in Kazakhstan's two richest cities, where smartphone use is ubiquitous.

But the wooden stool scandal is a spot of bad local press for the company at a time when its global reputation is under siege, due to public relations gaffes and accusations that it exploits its workforce.

Uber. Are you completely nuts? Is this what a Californian startup looks like?