Christian Quiñónez and Éver Pereira go to a private university Monday through Thursday in Vallemí. To get there, they must cross a river in a small boat. Photo by Nicolás Sáenz, borrowed from the Kurtural website with permission.

The series Cows That Fly, Schools That Crumble, published by Paraguayan economic and cultural news site Kurtural, explores the ways in which Paraguay's education system fails students. Below is the latest installment, written by Patricia Benítez. It will be republished on Global Voices in two parts.

Monday through Thursday, between 7 in the morning and 1 in the afternoon, Christian Quiñónez works as a secretary in the court system in Puerto Casado. The city shows up as La Victoria on Google Maps, but its real name comes from Carlos Casado del Alisal, a Spaniard who, in 1889, became the owner of practically the whole region after buying 5 million hectares of public land; an area larger than Costa Rica, Slovakia, Switzerland or Belgium.

It was here, near the Brazilian border, where Casado established the first tannin extraction company in the Americas. Back then, tannin was a coveted substance, due to its role in the leather-making process. The source of this powerful natural astringent was found in the bark of the quebracho tree – a group of species native to South America that in those times covered a significant portion of the territory acquired by Casado. A territory he acquired with both Paraguayans and indigenous peoples living inside.

In the first decades of the 20th century, the exploitation of the quebracho forests helped Puerto Casado to grow like never before. The town even got electricity before Asunción, the country's capital, thanks to a self-sufficiency system: the ground sawdust from the quebrachos fed fires to boil water and produce the electricity that the factory required. The surplus energy was distributed to the homes in town of high-ranking employees and foreigners from Argentina, Germany, Hungary and other countries.

The whole town, or at least a large part of it, worked for the company. According to Valentina Bonifacio, an Italian anthropologist who has been studying the town's history for years, Paraguayans filled the lower ranks of the company's hierarchy. Although they did not hold leadership roles, they did acquire administrative and accountancy skills. Below them, at the very lowest level, natives from various ethnic groups from other parts of the region (which makes up part of the Paraguayan Chaco), who had moved to Puerto Casado served as laborers and factory workers.

Today, the majority of Puerto Casado's 7,000 inhabitants are descendants of the old company's workers. Among them is Christian Quiñónez, who, when the clock strikes 3 p.m., prepares to leave his white-walled house with its large patio. The house is held up with massive columns; trunks of a tree whose wood is so strong it breaks axes. This is where it gets its name: quebracho, Spanish for axe-breaker.

Christian grew up under this roof, and he still lives there today, together with his family. The house is the legacy of his father's labor and a period of abundance in the land. But, unlike his father, an ex-blacksmith for the old company, Christian didn't grow up knowing tannin and never watched the trains run on the railway built by the company in 1927 to move the timber bolts from forest to factory.

The journey to university

Today in Puerto Casado, there is neither a public nor a private university. This means that for Christian, a staff member of the city's court of peace and a third-year law student, the only hope he has for obtaining a degree is on the other side of the river, in the city of Vallemí, in Concepción, the next province over. To get there, he crosses the river four days a week—Monday through Thursday—along with Éver Pereira, a friend of his since high school. Both of them attend the Vallemí branch of the María Serrana University, a private institution founded in 2009 whose degrees are still not accredited by the National Agency of Higher Education Evaluation and Accreditation.

If he had had the option, Christian would have gone to a public university. “Everyone who wants to be a professional dreams of going to the National University of Asunción,” he says as though stating the obvious. But in his experience, dreaming is almost never the same as doing. The public university closest to his town is the National University of Concepción, located in the city of the same name, a little more than 200 kilometers away.

The availability of higher education in Paraguay is limited. There are seven public universities in the entire country, with satellite campuses in a few cities. Meanwhile, there are 47 private universities with a very high number of subsidiaries all over the country. Additionally, the majority of the population, generally speaking, cannot study in public universities for a variety of reasons. The tuition costs are high, and the timetables for some degrees prevent students from being able to work while they study, something vitally important for those who need to earn money to support themselves. 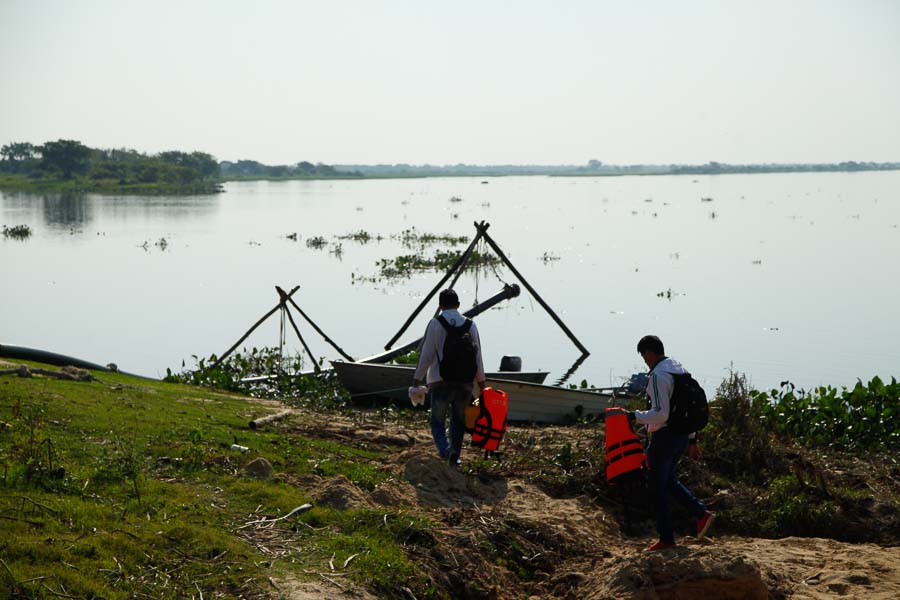 Crossing in his own boat costs Christian Quiñónez one dollar. The alternative would be a taking a ferry owned by a private company which costs 15 times more than public transit would in Asunción. Photograph by Nicolás Sáenz, taken with permission from the website Kurtural.

On a nice, sunny day, clear skies on the horizon, the trip to Vallemí takes at least an hour and a half. Even when the weather is favorable, the sheer immensity of the Paraguay River at its confluence with the Apa River doesn't make the trip a pleasure cruise. The deafening sound of the boat's motor echos off the magnificent hills and renders conversation impossible, leaving the travelers alone with their thoughts, observing the environment that, while fascinating for a first timer, grows dull once it becomes routine. “We sit down and with tovasy, jagua canóaisha (serious faces, like dogs in a canoe) we strike out for Vallemí,” Christian jokes in the Guaraní language.

Éver, an accounting student, has always liked mathematics. He is also the father of two small children, who he supports through his exhausting job in the middle of the woods cutting down trees to be turned into posts.

It was in this open-air office, which he has very much enjoyed, where he decided one day in 2015 to go back to school.

Up until June 8, 2016, neither Christian nor Éver had ever been in a wreck. That day, the air was still, but very cold. As had become their habit, they crossed the river just like they had been doing since March. This time, they were accompanied by Éver's 19-year-old brother, Luis, who was also studying at the university, as well as Ramón Paredes and his son Blásido, neighbors looking for a lift to Vallemí to buy some spare motorcycle parts. It was not the first time Paredes, a mechanic, had made the trip with them. Nobody suspected that it would be the last.

On that chilly, late fall afternoon, the outbound trip went by without hassle. The return, perhaps due to the extra weight of the motorcycle parts, did not. Twenty minutes after casting off, terror overcame the crew members. It was nearly 10 at night when the little boat began to sink, more than six kilometers off the Vallemí port. Guided by a single flashlight, the five men tried to empty the water flooding into the boat, but it didn't work well. Christian's attempt to run the boat aground did not work either, which someone — Christian doesn't remember who — suggested as they all shouted at each other desperately. With the motor completely submerged, the only option was to jump into the darkness. None of them had life jackets.

“I jumped into the water. I couldn't see a thing. I swam a few strokes, grabbed onto some camalotes (large, floating water plants) and got myself out of the water,” Christian says, remembering this fateful moment. But he had not come ashore in Vallemí or in Puerto Casado. Instead, he found himself on a small island between the two towns. The Pereira brothers, who had grown up around fishing boats and were expert swimmers, had made it as well. But there were no signs of Ramón Paredes or his son Blásido.

Christian and the Pereira brothers shouted their names for a few minutes, but no one responded. Wet and on the verge of hypothermia, they made their way to the interior of the island in search of help, and only after half an hour of walking found a group of fishermen who gave them first aid and helped them look for their friends. The lifeless body of Blásido was found a few hours later. The body of his father would be found three days later in a search carried out by the military.

“We were aware that something like this could happen, but not that it would be so serious. We boarded the boat with this risk every day. Being on the water is still a risk. So is life itself, but being on the water is just a little more dangerous,” Christian says of the accident on that wintry June night that claimed two of his friends. But this was not the first time studying had brought tragedy into his life.

In the second part of this series, we can see more of the difficulties and risks faced by Christian Quiñónez and others aspiring to follow through and finish a university degree.