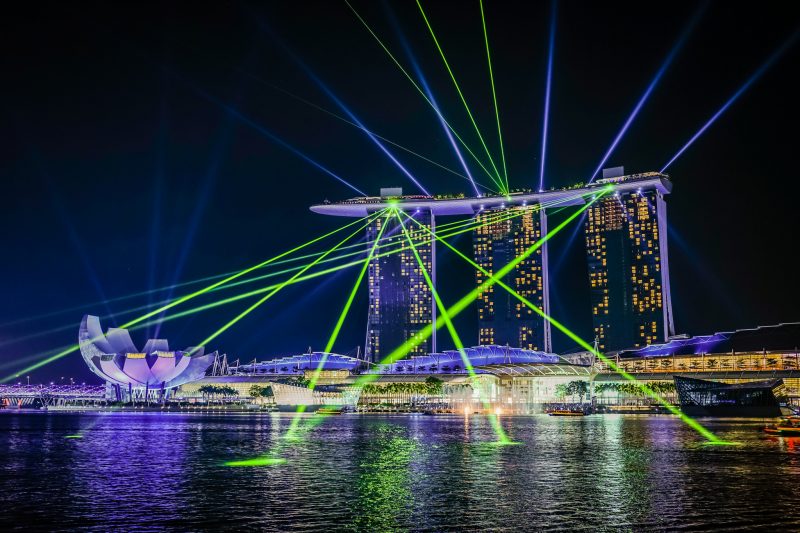 A light show at the Marina Bay Sands. The light festival is also located around the building. Source: Flickr / aotaro (CC BY 2.0)

Singapore’s annual Light Festival reopened on March 3 with 20-light-art installation made by artists from nine countries. This was the fifth time that Singapore organized the Light Festival in Marina Bay, a popular tourist destination that offers a panoramic view of the city state.

The festival, which is also known as “i Light Marina Bay,” is themed on “Light and Nature” to encourage Singaporeans to adopt sustainable habits in their everyday lives. In support of this objective, the art installations at the Marina Bay waterfront are made of energy-saving lighting or environmentally-friendly materials.

The festival is also getting the support of at least 79 building owners around Marina Bay to join the “Switch Off, Turn Up” campaign, which encourages residents and building owners to switch off non-essential lighting and to turn up air conditioning temperatures during office hours.

During the 2014 Light Festival, the organizers claimed they were able to save 269,000 kWh of energy or 140 tons of carbon dioxide for three weeks because of the “Switch Off, Turn Up” campaign. This is equivalent to providing electricity for more than a thousand housing flats for the same period.

This year’s Light Festival will also join the Earth Hour celebration on March 25 by switching off the lights of the art installations for one hour.

Visitors to the Light Festival are also being encouraged to exchange their incandescent light bulbs for energy-saving LED bulbs.

Since the opening of the festival, Instagram users have been uploading their photos of the art installations at the iconic Marina Bay waterfront. Take a look at how Singapore’s landmark buildings became even more stunning during the event:

Woohoo… no need to go overseas to see this type of art installations! It's all happening at #iLightMarinaBay! You gotta come and take a walk! #MarinaBay #ArtyFarty #iLightMarinaBay2017 #ArtInstallation #MediaPreview #ThePerfectFather

Not your average skyscraper. #ilightmarinabay