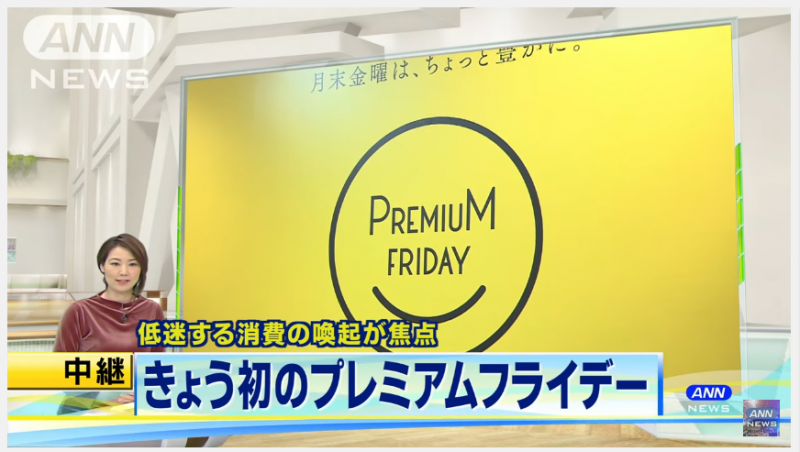 “Premium Friday” would allow workers to quit working at 3 p.m. on the last Friday of every month, and then go out and shop, take in a movie or a museum exhibit, or have dinner and drinks with friends and family. If employees across Japan participate in Premium Fridays it's estimated private consumption in Japan could rise by about ¥124 billion (approximately US$1.1 billion) each month.

But the first Premium Friday on February 24 has been declared a bust, with less than 4 percent of Japanese workers taking part. The main reason seems to be many Japanese employees are too busy to leave early.

[According to this article], just 3.7% of workers left work early on Premium Friday (on February 24, 2017). The initiative appears to be dead on arrival.

Premium Friday was intended to address two problems in Japan: sluggish consumer spending and what is perceived to be a culture of overwork. Generally speaking, consumer spending in Japan has remained sluggish for more than 20 years, especially in the decade since the Great Recession.

And despite Organisation for Economic Co-operation and Development (OECD) statistics that show Japanese workers work slightly fewer average hours per year than their counterparts in other countries, there is the perception that working hours are too long in Japan, and something must be done.

hours worked per worker according to @OECD_Stat

Blogger Nyokike, writing on Japanese curation site Naver Matome, has collected a variety of reactions to Premium Friday. The biggest problem with it? No one has the time to leave work early.

The opposite of “Premium Friday” would be “Road Show Friday.”

Another Twitter user, highlighting the results of a poll published in a newspaper, also noted that workload was one of the biggest obstacles to adopting Premium Friday:

Just 3.7% of survey respondents said they participated in Premium Friday. Reasons for not leaving early were “I still had work to do” (88.4%). Of the 3.7% of people who did leave work early, 41.8% said they spent time at home.

One Twitter user noted that, despite it being early evening on Premium Friday, the lights were still on at Dentsu, one of Japan's most influential white-collar employers.

Japan's increasingly precarious labor market may also prevent adoption of Premium Friday. While there currently is a labor shortage in Japan—there are 143 jobs for every 100 job seekers in Japan—the quality of work in Japan is low. Like in the United States, Canada and the United Kingdom, wages are low and many positions are part-time or on a contract, rather than salaried, basis.

So, marginalized contract workers may have the flexibility to take advantage of Premium Friday, but may not have the financial power to help the government boost consumer spending targets.

Government: “We are going to introduce Premium Friday.”

97% of companies: “We are not going to implement Premium Friday.”

Me (unemployed): “Aahh, since I'm not working this half-price beer tastes great!”

Conclusion: Only NEETS (those Not in Education, Employment, or Training) get Premium Fridays.