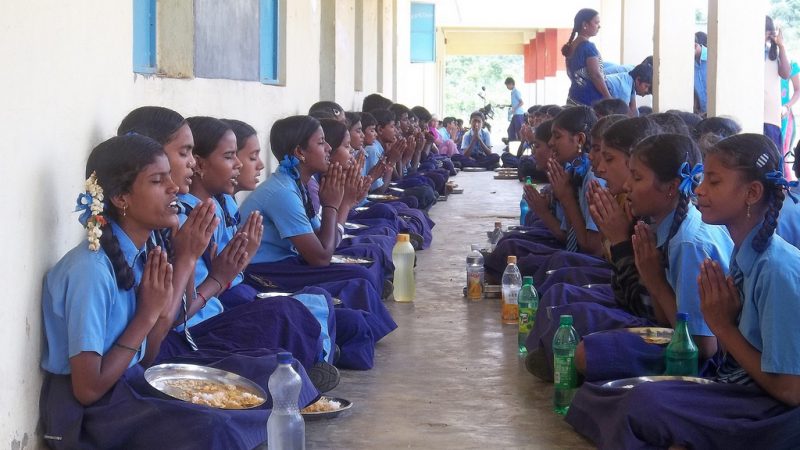 Lunch at a public school in India. Image from Flickr by Trinity Care Foundation. CC BY-NC-ND 2.0

Beginning this summer, the Indian government will controversially start requiring [2] more than 100 million school children to show their Aadhaar [3] (national identity) card in order to claim their lunches.

Aadhaar is one of the world's largest biometric identification systems. As of last month, 99 percent of adults in India — more than 1.1 billion people — were enrolled in Aadhaar.

In a press release [4] on Feb. 28, India's Human Resource Development Ministry said children at state schools won't receive their free lunches unless they can provide their own unique 12-digit Aadhaar ID number. The new policy is going into effect this summer across the country, except in Jammu, Kashmir, Meghalaya, and Assam.

According to the report [5]:

And, #aadhaar [6] made mandatory across the country for children to get their free hot-cooked meals under the the Mid-Day Meal scheme

The new policy will reportedly affect students between first and eighth grade. After students have applied for their Aadhaar cards, while they're waiting to receive the physical cards, they will be allowed to use “alternative identity.”

Since 1995, the Indian national government has operated a midday meal scheme [8] in most states across the country to help improve attendance and provide adequate nutrition to potentially malnourished children from lower social strata [9].

In 2015, India's apex court ruled [10] that the government cannot make an Aadhaar card a prerequisite for access to public services. Today, an appeal is pending before the constitutional bench of the Supreme Court.

The government says [11] the new policy is necessary to keep social services “seamless”:

The use of Aadhaar as identity document for delivery of services, benefits or subsidies simplifies the government delivery process and enables beneficiaries to get their entitlements directly and in a seamless manner.

On social media, critics have responded angrily to the new policy. For example, P. K. Prachi wrote on Facebook [12]:

The cruellest piece of news you'll read today. One knows that governments are heartless, but THIS heartless? Head hangs in shame. pic.twitter.com/VtR2ZxX1lG [16]

So our Orwellian Government is more interested in database & monitoring rather than ensuring midday meal to the hapless children..so creepy!

Rather than food, yep, where you have tons of food grains wasted due to lack of storage, you will transfer money to their dads to booze!

The way this Government is obsessed with “snooping” on its citizenry is quite sickening.. But old habits won't die.. Na?

Linking midday meals with Aadhar card is the most casually cruel policy decision of this government.

Some, however are defending the government. Twitter user “Don Toxique” said tighter measures are needed “to plug leakages.”

@jamewils [22] Aadhar is meant for delivery of essential goods and services to BPL and to plug leakages therefrom. That's the freedom they want

Opposing the Indian government's move, campaigners from “Right to Food [25]” issued a statement, which included the following points:

The right to food campaign strongly opposes the central government’s move to make Aadhaar compulsory for children under the mid-day meal scheme in government schools. This is nothing but an attempt to coerce people to enrol their children under Aadhaar.

School meals are an important entitlement of Indian children, legally enforceable under Supreme Court orders as well as under the National Food Security Act. Numerous studies show that India’s mid-day meal scheme has made an important contribution to higher school attendance, better child nutrition and more effective learning. Mid-day meals also help to break the barriers of class and caste by imparting to children of diverse backgrounds a habit of sharing meals.

No conditionalities can be imposed on this critical entitlement of Indian children. Making Aadhaar compulsory for the mid-day meal would serve no purpose, and is bound to disrupt instead of helping this important programme. Further, this move is a violation of Supreme Court orders.

Led by Prime Minister Narendra Modi, the Indian government has tried on several occasions to mandate Aadhaar numbers in public schools, colleges, and various state-subsidized programs. Despite the judiciary's opposition, Modi's government presses ahead with its policy, putting it on a collision course with the courts.