In Kyrgyzstan, Gender Discrimination and Violence Get a Boost from Popular Culture 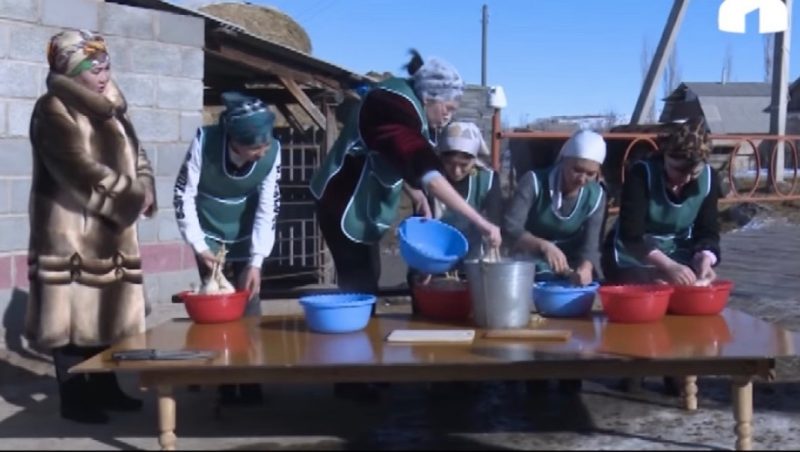 A screenshot from an episode of the show ‘Kelin’ broadcast on Kyrgyzstan's state broadcaster KTR.

To someone that has never been bride-kidnapped or doesn't know that the practice often entails rape and other forms of violence against the non-consenting “bride”, a recent advert promoting the services of a construction company in ex-Soviet Kyrgyzstan might appear funny.

In the commercial, Eldana Satybaldieva, better known as Eldana Foureyes and the Central Asian country's most popular Instagrammer, is blindfolded by men and driven off in an unknown direction.

Initially, Eldana resists the kidnapping attempt and threatens to have her assailants jailed. But when she reaches the kidnappers’ family apartment, an “elitka”, or elite block of flats built by the Cap Stroy KG firm, she comes to the conclusion that she has married fairly well after all.

The shock advert has proved a hit with many in a country where the latest available research suggests up to a third of Kyrgyz marriages begin without the bride's consent.

But it has also disappointed large swathes of Eldana's traditional fanbase, who delight in her geeky, light-hearted, one-to-two minute sketches focussed on everyday life as a young person living in Kyrgyzstan.

Feminist Nurgul Asylbekova echoed this sense of disappointment when she wrote on Facebook:

As I noted on the [Facebook] wall of the company that commissioned the advert, it is possible that they did not wish to propagate the disgraceful fashion of ala-kachuu (bride kidnapping) for which we have become famed as a country in which there is no rule of law and in which women do not have the basic right to choose their marriage partner. But it proves once again that violence against women is a cultural norm here, and neither the producer, nor the actors, nor the commissioners, nor the audience, have taken into account the humiliating and discriminatory nature of the message the advert purveys.

The advert might not have caused so much uproar had it not emerged a month after a television show, Kelin, began airing on the country's main state channel, sparking similar fury.

Kelin, which translates as ‘bride’ from the Kyrgyz, is a reality show in which girls from different backgrounds compete for the favour of an actress playing the part of a traditional mother-in-law, by engaging in tasks that range from ordinary domestic chores to more subservient ones such as foot rubs.

Bektour Iskender, the founder of the youth media organisation Kloop.kg wrote of the programme:

Kelin is yet another masterpiece from Kyrgyzstan’s public broadcaster.

For those that do not speak Kyrgyz, the word refers to the bride, the son’s wife. That is the official translation of the word.

The unofficial translation is, basically, slave — the lowest rung in the family hierarchy — workhorse, servant, a person often regarded as barely human and that can be readily ignored.

The Kelin reality show is really quite revolting. I know what I am talking about as I watched the first episode attentively (as much as was possible anyway), and I even compiled a blow-by-blow account that you can read here (in Russian).

This show is nothing more than a bunch of offensive clichés. The women featured in the show compete in a series of tasks that have been performed by unpaid servants (AKA kelinki) over the centuries in Central Asian households.

And this all unfolds to the accompaniment of psychological intimidation from the actress playing the role of the “capricious mother-in-law.” (ugh!)

I do not have the words to tell you how objectionable I find this show, which is paid for out of my taxes, and how unsuitable it is for airing in the prime-time slot.

One contestant apologized to the mother-in-law for serving cold tea and offered to pour her a fresh cup, (which the in-law later complained had something floating in it.)

In fact, feminists have argued, the dynamic between the faux mother-in-law and the contestants as represented on Kelin is just a superficial caricature of a harsher reality.

Many Kyrgyz women, and particularly those who were bride-kidnapped, suffer physical and psychological abuse at the hands of in-laws far worse than anything seen on the show.

Bride-kidnapping, in turn, is a crime in Kyrgyzstan that is very rarely punished with either fines or jail terms. While apologists for the crime and foreign commentators often cite it as a national “tradition” scholars that have studied its history claim that is not the case.

In the past, they note, incidents of bride kidnapping in nomadic Kyrgyz society did occur, but less regularly, and were treated as taboo acts that could spark blood feuds between families.

Feminists fear that such violence against women in modern-day Kyrgyzstan — apparently with a ringing endorsement from popular culture — has become normalised.

Below is a video showing an episode of the Kelin show, shared on the state broadcaster's official YouTube channel: