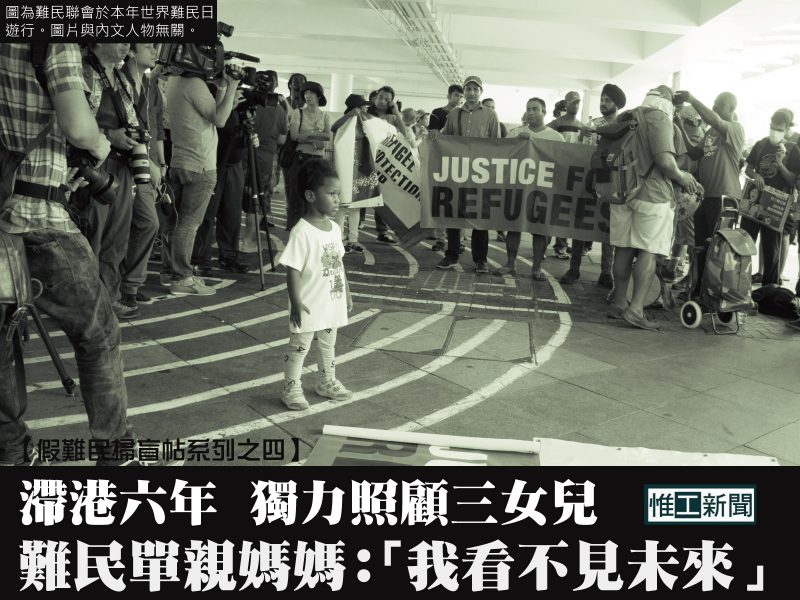 A series of news features by Worker News debunking the idea that asylum seekers arriving in Hong Kong are “fake refugees” won the Best Journalism Award in the 2016 E-Citizen Awards organized by civic groups inmediahk.net and the Culture and Media Education Foundation to promote original reporting, political cartoons, video documentary and photography online.

Below is an interview with Worker News’ volunteer reporters conducted by Betty Lau and published on inmediahk.net on December 16, 2016. The English version is published on Global Voices as a part of partnership agreement.

Inspired by a Facebook page that recorded the 40-day strike by Hong Kong dock workers in 2013, a number of supporters of the strike decided to start a news site that gives a platform to ordinary people. Worker News, as it was called, was then launched in August 2013.

The news site is maintained by half a dozen volunteers. Most of them have full-time jobs, and they decided in July 2015 to donate one-tenth of their income to hire part-time staff for the site’s editorial work.

In addition to reporting on local labour conditions, they also translate news related to workers’ rights from other parts of the world.

The work that won them an E-Citizen Award is a series of five stories taking to task the idea, pushed by local politicians and media outlets, that asylum seekers arriving in Hong Kong are “fake refugees.”

The first story is about the United Nations Convention Against Torture and Other Cruel, Inhuman or Degrading Treatment or Punishment. Hong Kong Chief Executive CY Leung threatened to quit the convention to stop “fake refugees” from entering Hong Kong last year. In response, Worker News reporters interviewed human rights organizations to point out that doing so would mean that Hong Kong's government would not be obliged to set up an independent committee to investigate police abuse of power.

The third article debunks three false claims spread by local mainstream media and politicians about refugees — first, that they are fake; second, that they come to Hong Kong to enjoy a free meal; and third, that they are criminals.

The last piece is a story about a woman asylum seeker coming from Jos, a city in Nigeria. As a Christian, she said she had became a likely target of attack by Muslim militants in the region. Her plan was to travel to Canada for asylum, but she was held up in Hong Kong by immigration authorities. She has been stuck in Hong Kong now for six years with her three kids.

Tam Kong explained why they decided to follow the story:

In recent years, Hong Kong society has developed very strong prejudice against people coming from other countries. If the person is a refugee, people assume that they are dirty and uncultured, they are here to enjoy free food, bring trouble… all these groundless prejudices keep spreading around. When the political parties and media use such false narratives to score political points, it is our responsibility to present a more genuine picture to the public.

Two members of the Worker News editorial team devoted themselves to reviewing Hong Kong's refugee system and history, and they used infographics to help readers understand the issue better:

Refugees have been coming in and out of Hong Kong throughout history. A big portion of Hong Kong’s population is from mainland China. Many Hong Kongers have been forced to migrate to other countries to escape from political instability [three waves of massive emigration took place after Deng Xiao Ping's announcement of China’s plan to reunify with Hong Kong in 1981, the Tiananmen crackdown in 1989 and before the handover of Hong Kong to China in 1997]… the motivations of people who escape to Hong Kong through illegal channel sand Hong Kongers emigrating to other countries through proper channels are similar. They just want to carry on living in a stable environment.

Sustainability is a challenge when it comes to a news site. Ah Fei, another member from the editorial team, said:

Running an online media is not as easy as people imagine. The rules of the game are similar to conventional media. If you don’t have the resources to promote the platform and produce enough stories, the outlets will end up with very few visits.

What drives Worker News contributors to carry on with their work is not the number of page views, but the mission to build a grassroots community where workers can learn about and be inspired by one another. To do so, they have been building up a distribution network among labour union organizers and NGOs to channel their news stories to workers and other ordinary people.