In Uruguay, Where Abortion Is Legal, a Judge's Ruling Grants a Man the Right to Stop a Woman’s Decision 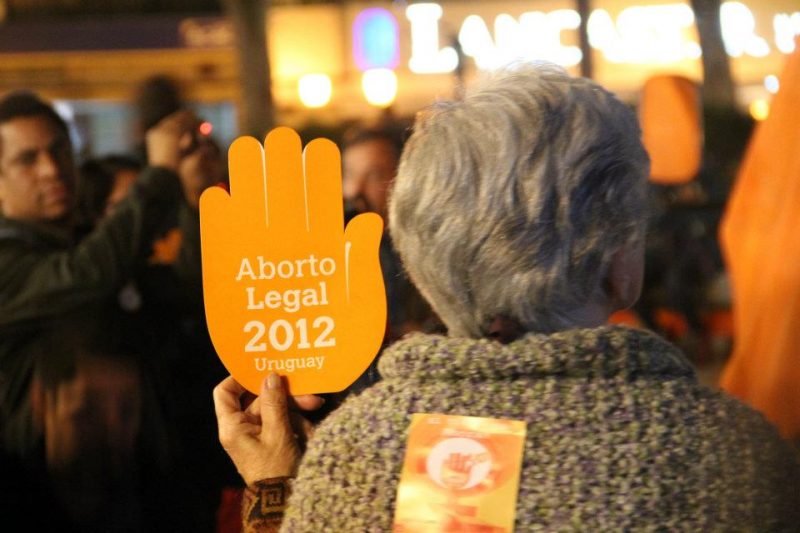 A woman holds the sign exof the pro-legal abortion campaign in Montevideo in 2012. Photo by Érico Matos via Wikimedia. CC BY-SA 2.0

A girl meets a guy. They have an on-and-off relationship for six months, until they mutually agree it’s not working anymore. It might sound like a common modern-day romance, except for the fact that not long after the girl finds out she is pregnant.

There's where things got complicated.

After considering her options and talking with her former partner, she decides not to continue with the pregnancy, but when she starts the process of interrupting it — something guaranteed by law in her country, Uruguay, until the 12th week of pregnancy — she finds out there's a legal complaint against her.

Her ex-partner wanted “to protect the life of his unborn child,” and with the help of a female judge, it was decided that “constitutionally” the fetus’ rights prevailed over the woman’s rights. The legal order came in a critical moment, when the 12-week period in which abortion is legal was about to close.

Shortly afterward, the woman — whose name has been kept anonymous — said she had a miscarriage. But the debates continue as certain media outlets and some people have cast doubt over the miscarriage (it's important to remember, however, that statistics show miscarriages are not a rare occurrence). For the woman, the fight will be now against the judge:

I'm indignant because [the judge's] job is to make the current law be respected. A law that was debated and approved through vote by Uruguayans […] A decision like this one can destroy you. These weeks were awful. Everyone had an opinion on my body. A judge was forcing me to have [the baby] and on top of it all be blamed when someone would tell that baby: “You were born because of a judge's order, not because your mother wanted you.”

The case has Uruguay debating a father’s say in an abortion. Five years after the law that gave women the right to interrupt unwanted pregnancies was passed and signed by then President José Mujica, a legal decision had overruled it. “I’m feeling disrespected, as if your life or your decision, what happens to you, what you feel or how are you didn’t matter to anyone,” the women said in a TV interview for the news outlet Telenoche.

According to the Uruguayan news outlet El Pais, Pura Book Silva, the judge behind the decision that favored the man, justified her ruling by affirming that the “abortion law cannot be interpreted as a math operation” and that justice must intervene to defend “the rights of the child.” The judge also argued:

Every person has the right to have his or her life respected. This right will be protected by law and, in general, starting from the moment of conception. No one can be arbitrarily deprived of life.

A question of rights

The case has divided Uruguayans. A judge's ruling versus a constitutional law. A woman’s rights over her own body versus the rights of a fetus. It's important to note that the road towards legalization of abortion in Uruguay hasn't been smooth. The law was not approved unanimously by the Senat in 2012, and a year later, groups attempting to overturn decriminalisation pushed for a referendum that failed to gather popular support in the end.

A parents’ grassroots group, called “Everyone for Our Children,” celebrated the decision for not “giving into the pressure of certain social groups,” according to newspaper El Observador. One of the group’s representatives declared that this was also an issue of equality, pointing at the father's right to decide:

We also need to give the father the possibility to have a say in this matter.

Former Health Secretary Leonel Briozzo, who was responsible for promoting the law back in 2012, disagrees. He used his Twitter account to air his opinion:

The judge has committed an inexcusable mistake: she has put her religious, ideological and political beliefs over the law's application

No judge can halt a law that is proven to be beneficial and has not been declared unconstitutional, trying to block the work of healthcare workers.

However, the National Association of Magistrates from Uruguay fully supported the judge’s decision. According to El Observador, they justify their position by defending “the independence of the magistrature.” To the Association, all judges’ decisions are based on “facts aligned with the law.”

A study published in the International Journal of Gynecology and Obstetrics in 2016 showed Uruguay as the country with the lowest rate of maternal mortality in Latin America. According to the World Health Organization (WHO), the country registers 14 deaths for every 100,000 children born alive. In 25 years, Uruguay has decreased the maternal mortality rates by 59.5%. Until 2005, abortions were responsible for 37.5% of these deaths.

The study, authored by Brazilian physician Anibal Faúndes, states that the main cause of mortality for pregnant women in the 1990s in Uruguay was unsafe abortions, caused by “hemorrhages and other complications.” In the first year of legalized abortion, 6,676 abortions were registered in Uruguay and only one death: the case of a woman who went to an underground provider to get help.

Several organizations working on the defense of women’s rights signed a manifesto against the judge’s ruling. The manifesto notes that Uruguay does not have a law ensuring “unborn children’s rights” and that “every obstacle put between women and their right to interrupt a pregnancy under the conditions foreseen by the law is a violation of their rights, for which the State is responsible.”

In her TV interview, the affected woman reflected:

They will continue [to find ways] so that women cannot have the right to decide over their own lives […] We’re back to how it was before, when women had to decide for themselves with a spoon and a hanger and die bleeding out. It’s a moral regression for women, for we are again not masters of our own bodies. There's a law, but it’s not applicable to you […] Why are they allowed to give a fetus its own lawyer, when it’s not yet born and it’s not even an object of rights?