As Starbucks Mulls Entry Into Jamaica, a Look at Coffee Culture (or Lack Thereof) in the Land of the Blue Mountains 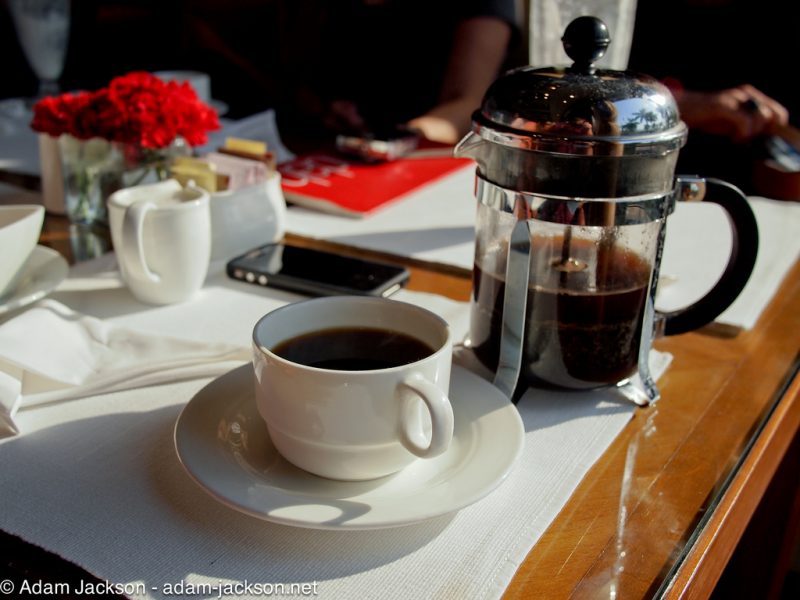 Jamaica is the land of Blue Mountain Coffee — the mild and deliciously refreshing brand is generally acknowledged by aficionados as one of the world's iconic coffees. Despite the great reputation of one of its most valuable products, however, Jamaica cannot be called a coffee-drinking nation. At home, Jamaicans habitually drink tea — including a range of herbal teas, peppermint and ginger flavours being perennial favourites — and imported instant coffee.

But is there a growing coffee culture and an accompanying appreciation of indigenous coffee? In the capital city Kingston, at least, new cafés are opening in uptown malls and shopping precincts on a regular basis, in a relatively small catchment area. Elsewhere on the island? Not so much. And in those cafés, are Jamaicans enjoying drinking their own coffee — or are they mainly there for the socialising, business networking and free wifi? At this stage, the café phenomenon is so new that it might be premature to equate it with a coffee culture.

Still, the international chain, Starbucks, is reported to be considering an entry into the Jamaican market, having expanded rapidly in Latin America in recent years. The chain already operates 42 stores in five Caribbean countries.

While Starbucks is mass market, Blue Mountain Coffee is, and always has been, a luxury brand. Grown on fairly small farms at elevations of 3,000 to 5,500 feet, it is expensive and beyond most Jamaicans’ budgets. High Mountain and Jamaica Supreme coffee, grown at lower levels is cheaper.

Coffee itself has a long history in Jamaica, having been brought to the island from Martinique in the 18th century and planted by former governor Nicholas Lawes in Temple Hall, St. Andrew — an area north, west and east of Kingston. Cultivation using slave labour grew rapidly in other areas — including the Blue Mountains — from then until the 1830s. Since then, despite global demand, the coffee industry in Jamaica has had many challenges, including labor shortages, disease, hurricane damage mismanagement and low production. Now, most coffee plantations sell their crops to the government's Coffee Industry Board of Jamaica, which itself has had a somewhat rocky history, very recently firing its lawyer over flood insurance claims. While 70% of Blue Mountain coffee has been sold to the Japanese market for decades, demand has declined due to an increase in local processors’ prices.

The Starbucks news has therefore received a mixed reception among Jamaicans. Some were of the view that local coffee must benefit:

@chsAnthony @Petchary @JamaicaOlympics @Starbucks perhaps, the point that is being lost, is the real need to support jamaican coffee.

A Twitter poll with 592 results suggested that Blue Mountain Coffee is the way to go:

How do you feel about @Starbucks coffee ☕️ coming to Jamaica ???

Others were more positive, suggesting that Starbucks would bring more variety:

Another Twitter user was adamant that did not want her choices dictated by others:

I feel like Jacans want you to like something simply on the basis that it was ‘made’ here. So what about my tastebuds? kmt.

Most Jamaicans who have reacted negatively to the news of a possible Starbucks invasion seem to assume that its stores will not sell local coffee. However, as a Jamaican Blue Mountain coffee broker noted in its blog, the coffee chain could follow the example of Colombia, where Starbucks sells a range of local coffees. The snag here, though, is the cost of Blue Mountain, which might make Starbucks’ offerings too pricey. Having said that, several local coffeeshops such as Café Blue and Cannonball Café already sell Blue Mountain at reasonable prices.

Social enterprise Deaf Can! Coffee is also making waves, having just won a million Jamaican dollars (just under US $8,000) — as well as the People's Choice Award — to boost its business in the JN Foundation‘s Pitch for Purpose event. Deaf Can! has many fans:

Meanwhile, Starbucks announced recently that its Starbucks Reserve® Jamaica Blue Mountain® coffee will be on sale in February for a limited period in select North American stores and online, noting:

The Coffee Industry Board of Jamaica sets meticulous standards for growing, harvesting and processing their coffee, with each bean being inspected and certified to meet rigorous quality standards before it can earn the Jamaica Blue Mountain name. […] The growing conditions are unique, and the coffee grown on estates [there] produce layers of cocoa and citrus unlike anywhere else in the world.

So what is the verdict? One Jamaica-based diplomat had the final say on his blog:

Jamaican has a long history of coffee farms, but where are the coffee drinkers? I don’t mean to say that no one drinks coffee or there aren’t any coffee shops, but there’s a distinct lack of coffee as part of local tradition and I wondered why? […]

Here at $2.50+ a cup it's expensive and not an every day treat for most people. At work, unlike all other countries we’ve lived, there’s no decent coffee available – despite the fact that coffee is one of Jamaica’s most well-known exports. Therein lies the problem, as its famous coffee is exported for a very high price, very little Blue Mountain coffee is available locally, and what remains is just crazy expensive for most people. Add to that the threats from rust disease, hurricanes and the abandonment of coffee farms in recent years, which have further limited the availability and affordability of the drink…

So, here in Jamaica, I don’t really experience a coffee culture. (Making coffee in my kitchen doesn’t count.)