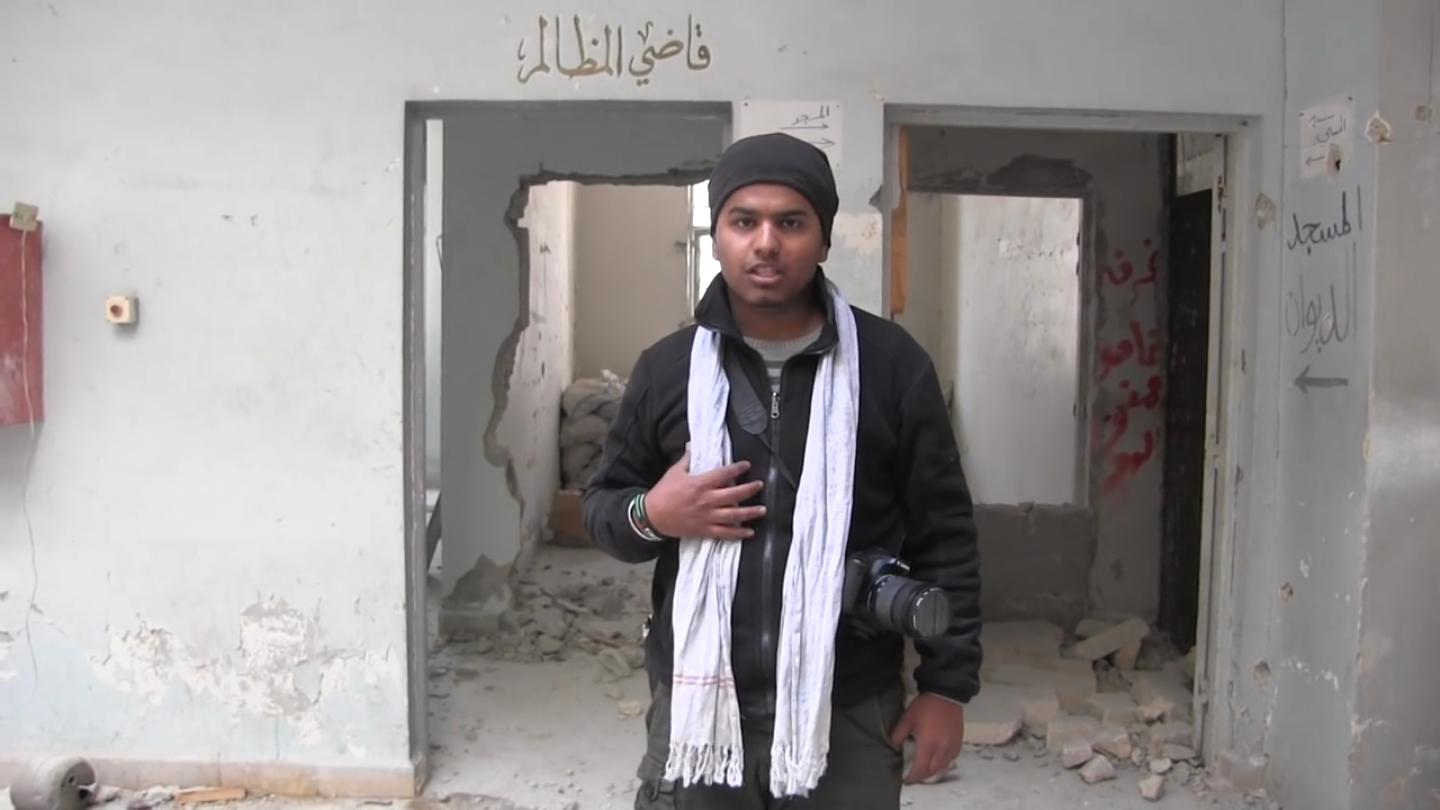 Screenshot from Khudr's video inside a prison that was run by ISIS. Source: YouTube.

In late February, Turkish-backed Syrian rebels took the city of Al Bab, approximately 40 kilometers (25 miles) northeast of Aleppo. The city had been under ISIS control since November 2013, and its capture on February 24 was part of Turkey's “Euphrates Shield” operation, with the backing of both the US-led coalition and Russian airstrikes.

Al Bab provides insight into the complexity of military operations in Syria today. Indeed, the city was besieged by both Assad regime-allied forces from the south and Turkish-backed rebels from the north, each trying to recapture it from ISIS, with clashes between the two happening concurrently.

Many civilians have started sharing their stories of life under the brutal ISIS organization (also known as Daesh or the so-called Islamic State). One 30-year-old mother of four, Umm Abdo, told AFP's Nazeer Al-Khatib that ISIS forced civilians out of their shelters to take their place as anti-ISIS forces bombarded the area:

Each time they [ISIS] found a family in a basement, they'd chase them out so they could take their place. They wouldn't allow anyone to go out into the street, and at the same time you couldn't take cover in a basement. So you just had to endure the bombardment.

Global Voices reached out to two activists who had been jailed by ISIS in Al Bab at one point. The first is Issa Ali El Khudr, a 23-year-old citizen journalist born in Aleppo. The second is Karam Al-Masri, a 23-year-old photographer and video journalist from Aleppo. 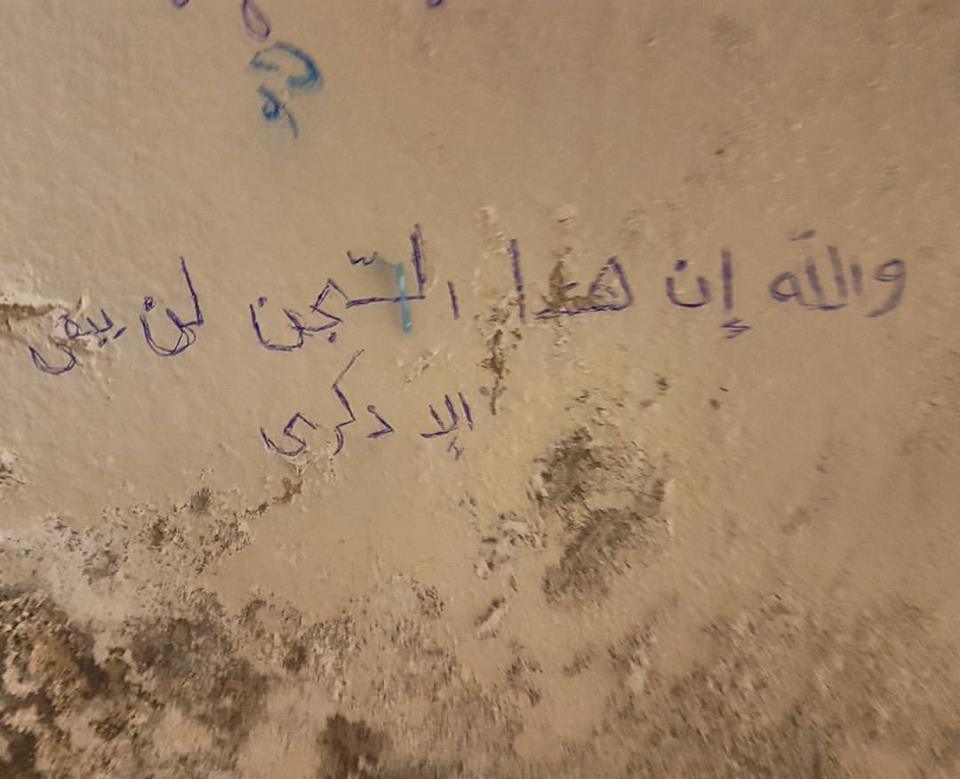 Photo shared by Abdo Khuder, a former member of the Local Council of Aleppo City‎, showing a message written by a former inmate of the prison. It reads: “I swear that from this prison nothing remains but a memory.” Source: Facebook.

‘I thought I would die there’

Khudr released a video widely shared in Syrian circles showing him going through the ISIS-run prison where he spent six months of his life. On June 3, 2014, Khudr, then 20 years old and armed with nothing but a camera, was arrested in the northern part of Aleppo's countryside and was sent to the “Islamic Court's Prison” in Al Bab, the name given to a former Assad regime court house turned into a prison by ISIS.

At the beginning of the video, we see Khudr with a scarf wrapped around his face. Seconds later, he removes it and says:

And he told Global Voices: “I thought I would die there. All I could think about was how to let my parents know so that they would stop waiting.”

Luckily, his sentence was reduced to three months in December. But Khudr didn't wait; he escaped after 15 days.

Over two years later, on February 23, 2017, Khudr decided to go back to the prison and asked a friend to film him as they he went through its remains. The purpose? To show those “impressed” by ISIS’ slogans of what they actually did to those who opposed them. He explains:

At several points in the video, we see Khudr going from room to room to tell us who stayed there.

Sequence of screenshots from about minute four showing Khudr entering a room formerly occupied by an ISIS militant called Abu Hassan. Khudr was tortured in this room, he says. Source: YouTube.

Halfway through the video, Khudr finally reaches the room in which he was imprisoned:

When they first brought me, they brought me to this room. They used to have me sit over there in that corner. Here we see that every prisoner had a number. Issa Ali El Khodor had the number 292. My number went down to 200. In this cell, we were 115. Come.

On the wall, we see a famous line by the Palestinian poet Mahmoud Darwish written by Khudr himself on the day he entered: “On this earth what makes life worth living:” 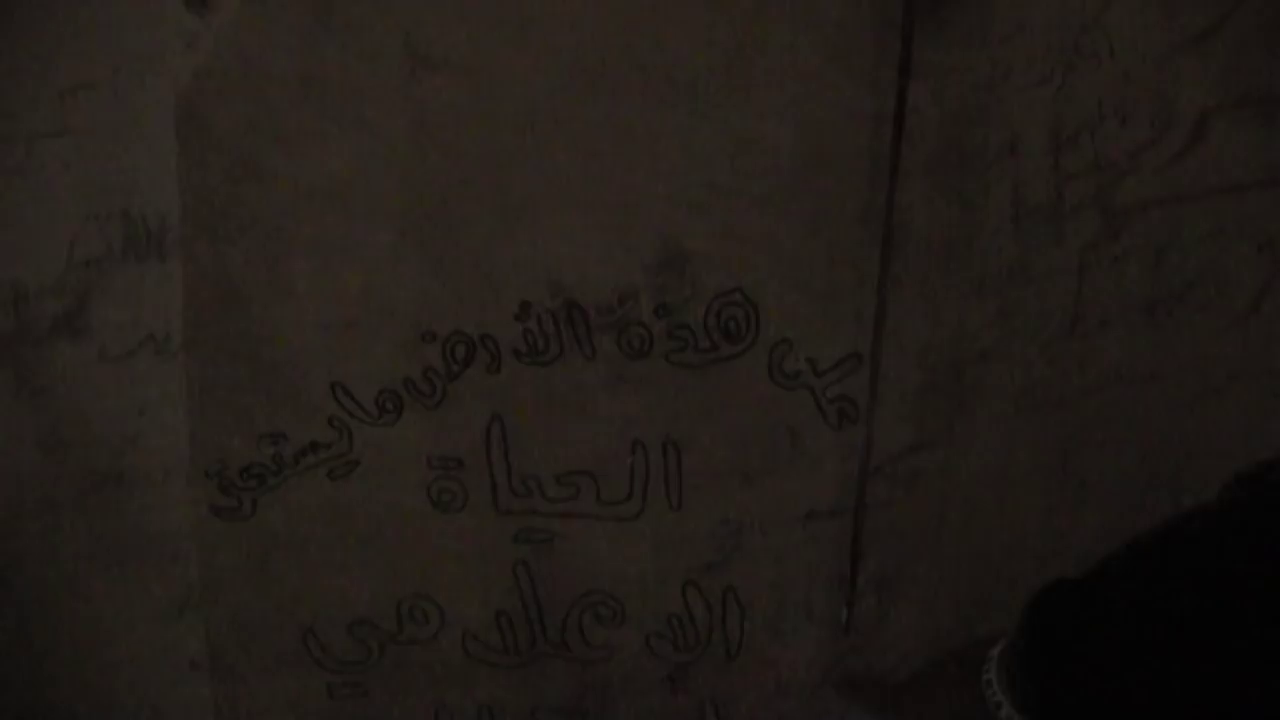 Screenshot from the video showing the Darwish quote followed by ‘Khalifa Khudr’ and the date. Source: YouTube.

At that point we see a number of names written on the walls. They belong to the up to 115 prisoners that, according to Khudr, were living together in this cell: 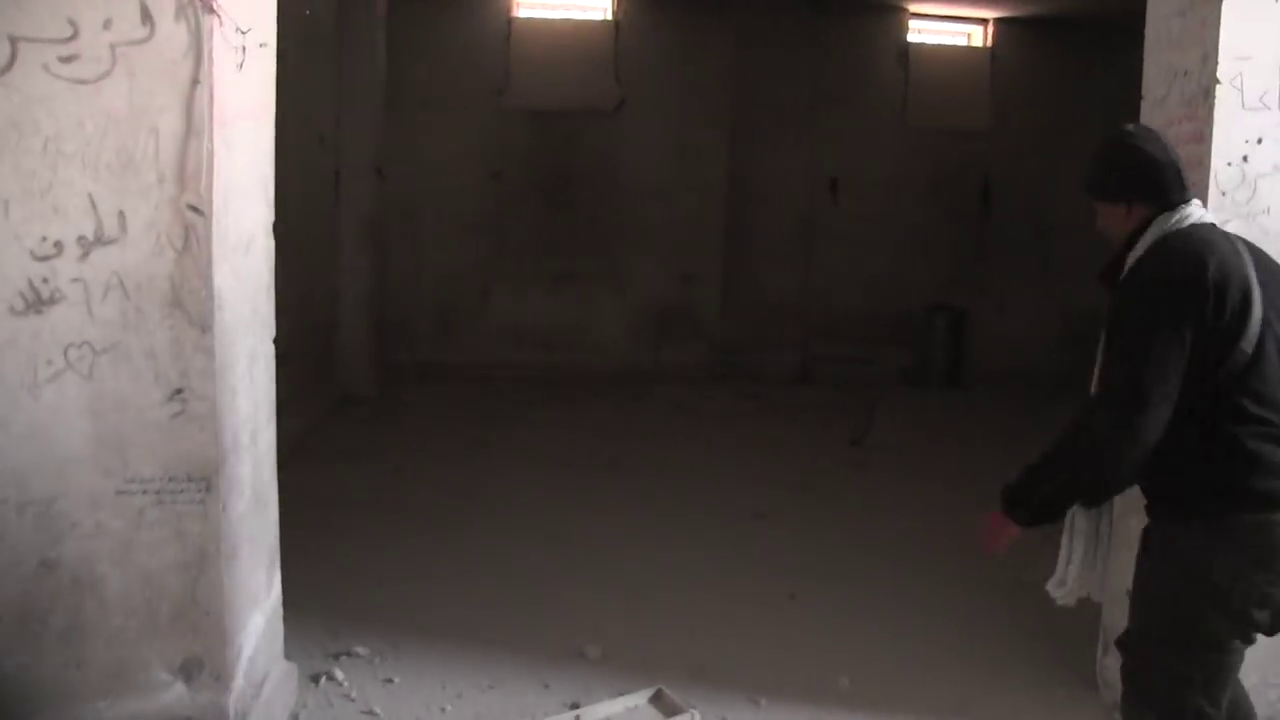 Screenshot from the video showing the room. Source: YouTube.

Journalist Karam Al-Masri, 28/11/2013… ‘Freedom of the press'… [ISIS member] Abu Salman Hajji Moscow is a Russian who was arrested… He was sentenced with a warrant that came out from Al Raqqa [ISIS’ self-proclaimed capital]. Khaled Al Shawki’s fate is not known. Hussein Abu Yaacoub got out. Walid el Sheikh’s fate is unknown. Abu Rassoul got out and yesterday he went into prison. Adnan Al Selou was executed unfortunately. Ibrahim Ibrahim we don’t know where he is. Rabi Al Hajj Ali I was talking to yesterday.

He shows a small room next to theirs and says, “This was the execution room. When a person was put here, he would consider himself dead.”

They then reach the cell where Khudr says he spent the month of June 2014 with two other men. 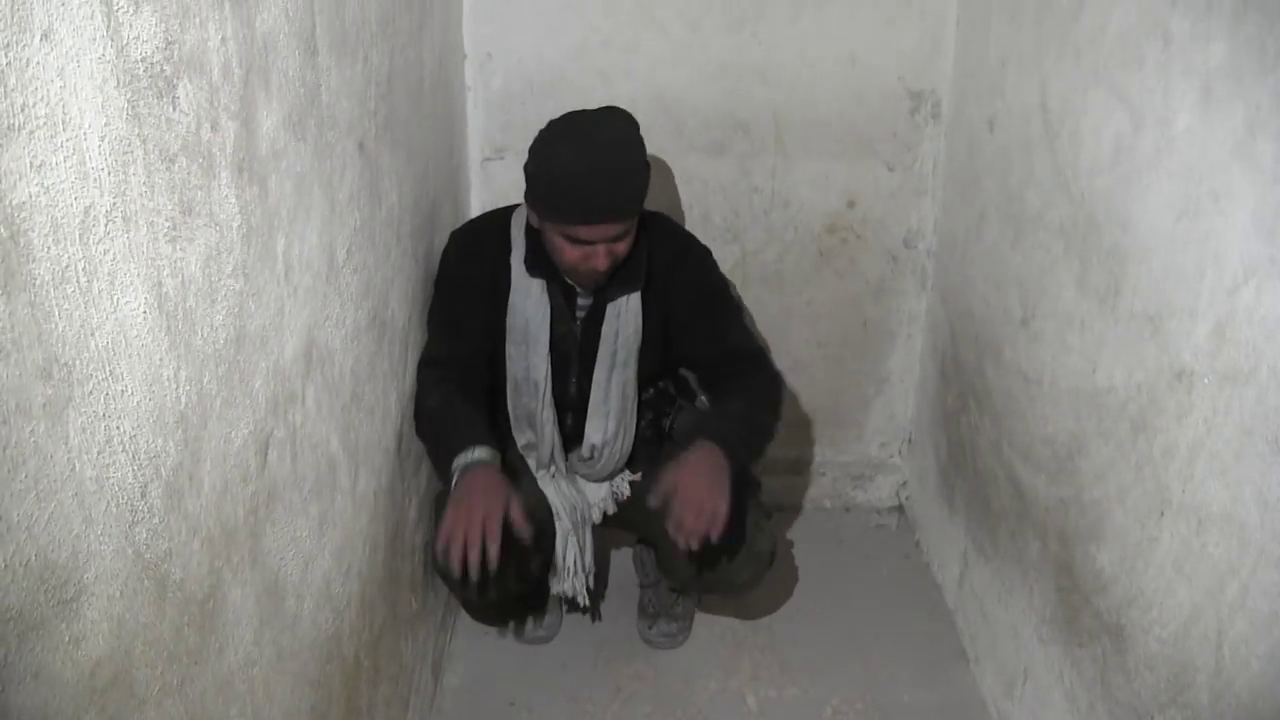 Khudr sits in the cell where he spent the month of June 2014 with two other men. Source: YouTube.

In this cell, I remained the whole month of June. Me, Bassel El Homsi who got killed and Youssef who left. We slept together in this solitary room. And they used to bring someone with us and all four of us would sleep here. We used to crouch here to fit each other and we would sleep squeezed. I am going to pray here. A gratitude prayer, not an obligatory one. 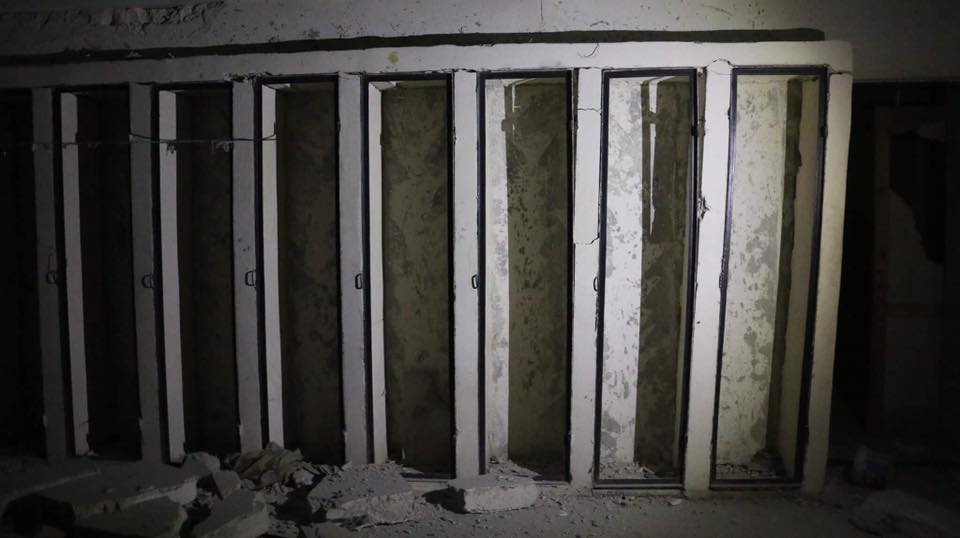 Cells where ISIS kept some of their prisoners. The prison used to be run by the Assad regime. Photo taken by Khudr. Source: Facebook.

And in this room there is a toilet. We were 66 in here. I was here for a month. And we used to sleep like this. One would lie on one side and one on the other and the legs would cross each other.

Another Syrian man, who Global Voices was told but cannot confirm is a citizen journalist from a Damascus suburb, took a recent photo of himself in one of those coffin-like rooms:

These are Assad's former prisons. This is what the single-person cells look like. pic.twitter.com/4HnrfL6gYW

‘It was extremely painful’

Among the many prisoners who wrote their names on those walls was Karam Al-Masri. On February 28, 2017, he uploaded the following photo on Facebook: 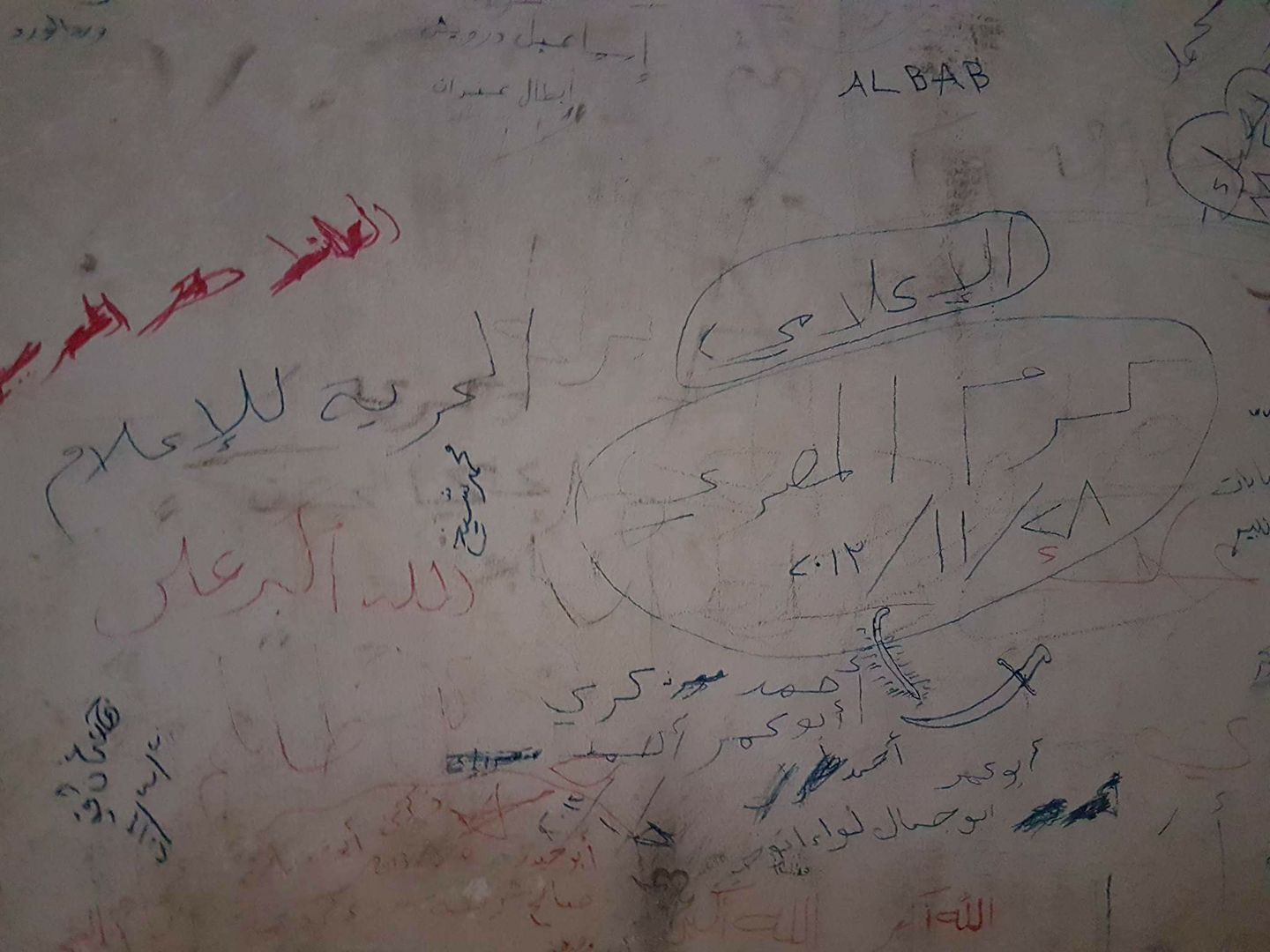 Karam Al-Masri's name, on the right (the large circle) with the date he wrote it on: November 28, 2013. Taken by Abdo Khuder. Source: Facebook.

Al-Masri, also armed with nothing but a camera, was arrested by ISIS along with two other friends, a photographer and a paramedic, on November 23, 2013, he told Global Voices. He said he was on his way to document a massacre that had just occurred:

On my way to document the massacre, ISIS stopped me. They took me out of the car and searched me. They asked me what I was doing and I told them I was a photographer. When I told them, they put a bag over my head and took me to a near by pediatric hospital that they had turned into a base.

Al-Masri didn't stay at the former pediatric hospital for long. After a few hours, ISIS took him to a village about 20 kilometers (12.4 miles) from Aleppo. There, they took him to a facility that few knew even existed as it was located underground. That place included a prison with approximately 45 rooms. “All rooms were designed for solitary confinement,” he tells us. “There were no collective rooms.”

At the time, Al-Masri had just started working for the news agency AFP as a stringer. ISIS therefore found him “guilty” of working for a Western outlet, which made him in their eyes a “kaffir” or unbeliever, which is theoretically punishable by death.

Luckily for Al-Masri, he ended up spending six months in prison. Of those six months, he said he spent a month and a half in solitary confinement:

My cell was about two meters of height and a meter in width. I did not see the light for 45 days. As a result of spending so much time in complete darkness, I developed problems with my eyes and had to start wearing glasses.

The reason why he did not stay longer in solitary confinement was because factions of the Free Syrian Army (FSA) were making advances against ISIS in that area, forcing the latter to retreat to another location, taking the prisoners with them, he said:

They killed a lot of prisoners when they decided to retreat, as though they had no use for them anymore. I was lucky enough to be spared.

But those 45 days were enough to mark him for a long time. His punishment felt so harsh he compared it to being in a regime prison:

It was extremely painful. It felt like I was in a prison operated by the regime. I was arrested by the regime before 2011. There was no difference between them. It was the same level of torture, same principle.

Al-Masri said he did not stay at the second location for more than seven or eight days as, this time, the regime was making advances against ISIS and the group had to relocate to a third location. He stayed at that third location for a further 45 days before ending up in Al Bab, where he served the rest of his sentence until his release.

He recently recounted his experience for AFP. He said:

I still remember every detail. The 165 days in ISIS detention are etched into my memory. In the first 45 days, they only fed us every 3 days. The food was a half portion of Arabic flatbread, or 3 olives or an egg. I didn't see a single shabbih (pro-regime militant) – all those held with us were rebels, activists and journalists.

Still, Al-Masri was luckier than many. He was kept alive because ISIS wished to exchange him for prisoners captured by the FSA. In the end, despite the fact that an exchange never happened, he was still granted “amnesty,” and he was released along with his photographer friend.

His paramedic friend was not so lucky:

Upon his release, Al-Masri found out that his family had been killed. At the beginning of 2014, he said, the Assad regime had dropped a barrel bomb over their building, killing all those inside, including both his parents.