A Year After Berta Cáceres’ Assassination, the Struggle for Land in Honduras Continues—and So Do the Threats 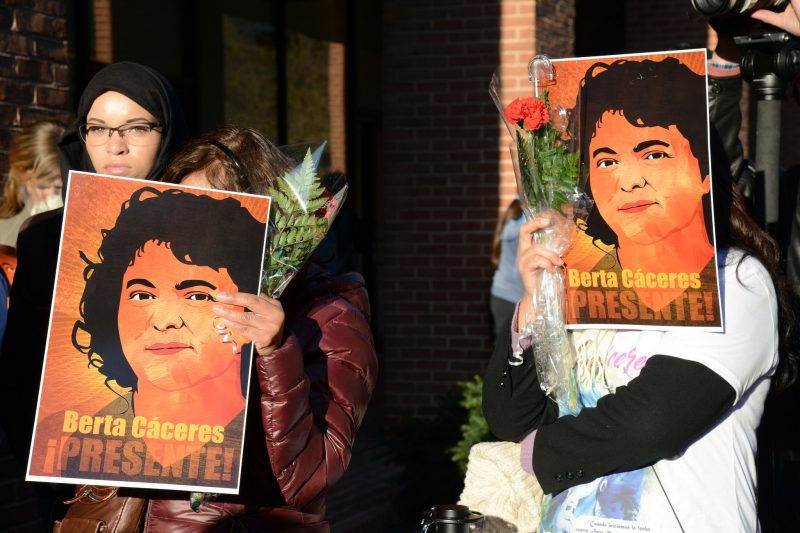 “Demonstration for Berta Cáceres”. Vigil at the doors of the OAS (Organization of American States) on 5 April 2016. Photo by Daniel Cima from the Inter-American Commission on Human Rights on Flickr. Used under CC 2.0 licence.

Below is an edited version of an article by Laura Salas originally published on Witness. It is republished on Global Voices with permission from the author.

Since her death a year ago, Berta Cáceres, who founded the Civic Council of Popular and Indigenous Organizations of Honduras (in Spanish, Consejo Cívico de Organizaciones Populares e Indígenas de Honduras), has become an icon of the land rights struggle of hundreds of local communities throughout Central America and the rest of the American continent.

Cáceres was killed on 3 March 2016, and a recent report from international NGO Global Witness revealed details of her murder, which allegedly was a conspiracy between representatives of the Honduran government and DESA company – in charge of the construction of the Agua Zarca hydroelectric dam project – for her leadership in defending the territory of the Lenca communities in Honduras. The report's main findings included:

1. DESA's ties to the murder of Berta Cáceres, given that two of the men currently detained for her assassination worked for the company.

Groups throughout Latin America and indigenous communities have been following Cáceres’ example and celebrating her work to defend their land against large transnational corporations, which, with the support of local governments, profit from the exploitation of natural resources at the expense of the rights of the people. In some cases, like in Cáceres’, this struggle is even costing their lives.

In the following video, the Central American Movement 2 March ‘Berta Lives On’ summed up her legacy as follows:

I am a warrior because I come from people that are also warriors.

In this context, the technologies available to the communities and their supporters are indispensable. Today, these tools and platforms allow local social movements to tell their own stories and share their version of events, often exposing atrocious violations of human rights.

That is why, on the anniversary of the reprehensible murder of Cáceres, we are reminded of some of the audiovisual works on this topic which speak not only to Cáceres’ legacy, but also to the struggle of entire communities that face abuses every day.

Guardian of the Rivers

“Guardian of the Rivers” is a documentary by the Mother Earth Campaign and promoted by grassroots organizations to “show the interior of Honduras, one of the most dangerous countries for the defenders of natural resources, governed by a notion of extractive development, that is confronted by the worldview of the people and which does not allow them to take decisions related to their environment.” The documentary begins with a quote by Cáceres:

The Lenca people are the ancestral guardians of the rivers and in turn are protected by the young feminine spirits who teach us that giving our lives in various ways to defend the rivers is to give our lives for the good of humanity and this planet.

Berta Did Not Die, but Multiplied

We strive to make energy a human right. It should be part of the common property and therefore the people should have a say in it. People should understand why the issue of energy is linked to the dams, the mining, the water, and the oil concessions, in order to understand why these projects are above the government.

These are the words of Cáceres herself in this documentary produced by the Central American Caravan For Good Living (‘Buen Vivir’) to “show the truth and the contexts behind the murder, contrary to what the government and the media in Honduras want us to believe.”

The “Berta Vive” (Berta Lives) documentary clearly shows the international condemnation of her brutal assassination, the Honduran government's attempts to discredit her struggle, as well as the racist treatment that the Lenca people have received from international organizations such as the Netherlands Development Finance Company (FMO), which funds the Honduran extractive development model through projects like dams that the Civic Council of Popular and Indigenous Organizations of Honduras opposes.

All these documentaries show that, like Berta Cáceres, the members of the Lenca communities who resist the exploitation of their territory are at risk for their activism, but they also highlight their strength and determination. Through these audiovisual works, people around the world can follow the struggle of these women and their communities and increase awareness of the situation to help diminish the dangers they face and properly safeguard the natural resources they protect.