Walking on Death Along the Iraqi Border 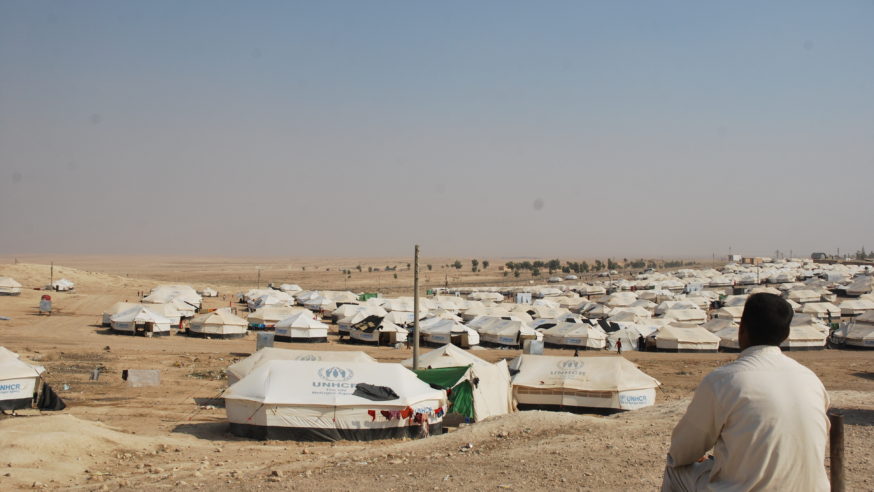 A displaced man from Dayr az-Zawr looks down at the al-Hawl Camp, 40 Km east of al-Hasakah. October 24, 2016. Source: Kamal Sheikho/SyriaUntold

This story was originally written for Syria Untold by Kamal Sheikho. It was translated by Naziha Baassiri. It is republished here as part of a partnership agreement.

Defying death, they jump silently but frantically as they leave their past behind. They care for nothing but these moments that will define the rest of their existence. They are now in search of a new life.

Abdus-Sattar (pseudonym used for security reasons), a man in his fifties, used to be a farmer in the city of Bukamal located at the farthest tip of eastern Dayr az-Zawr province, Syria. The area has been under the control of the ‘Islamic State’ (ISIS) group since July 2014. He told SyriaUntold how he, along with his wife and three children, fled al-Bukamal and covered 200 km in 16 days in the desert, avoiding mine fields to reach al-Hawl Camp in Al-Hasakah.

In an attempt to stop civilians from fleeing the area, ISIS has resorted to setting up check points and patrols along the outer roads, as well as planting mines around border cities and towns.

Abdus-Sattar said he and his family had to walk for parts of their journey after taking a smuggler’s car. On November 25, 2016, they reached Rajm as-Salibi on the Syrian-Iraqi border, which is under the control of the Kurdish People’s Protection Units (YPG). After two weeks, Abdus-Sattar and his family were moved to al-Hawl Camp. 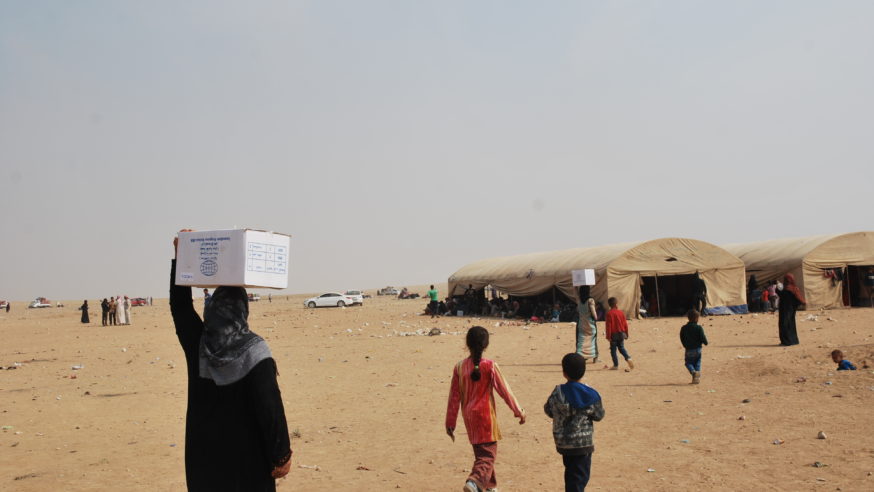 A displaced woman from Raqqa after she received food aid at Rajm as-Salibi on the Syrian-Iraqi border. October 25, 2016. 25-10-2016. Source: Kamal Sheikho/SyriaUntold

Abdus-Sattar and others like him did not care about the landmines they knew they would have to dodge on their journey to freedom. Desperate to reach the other side under Kurdish control, they walked rugged roads that they had never been on before, fully aware that unpleasant surprises, such as a land mine or a bomb, could be there waiting for them in the dark.

Talking to SyriaUntold, Abdus-Sattar said he had agreed to pay $1,000 to the smuggler as long as they avoid roads that had landmines.

However, after reaching the Iraqi border on November 10, “the smuggler told us to continue our journey on foot and to be careful to follow the footprints that barely show in the dark. I realized then that we were walking on death, because we were in the middle of a mine field.”

He added that the journey was in several stages. “We stayed at a border village for almost 12 days, before we walked for a whole night to reach the outskirts of al-Hasakah city.”

“We stayed at an empty place in the middle of the desert for a day before we walked for 12 hours from 6 pm to 6 am the next day to reach the Rajm as-Salibi border point,” continued the farmer.

Abdus-Sattar’s hardship and that of others like him does not end at their arrival at Rajm as-Salibi. Between November 25 and December 10, he and his family were stuck at the Iraqi border waiting to be allowed into the al-Hawl Camp. This is part of a YPG security vetting process of all those fleeing ISIS-controlled areas to stop ISIS members from infiltrating the camp.

Today, Abdus-Sattar and his family live in a small tent that doesn’t exceed four meters, which is divided into two sections: a kitchen and a sleeping area. Now, this family awaits the YPG approval to travel to Damascus.

Abdus-Sattar lights a cigarette and shares his troubled thoughts with SyriaUntold: “For two and a half years, I lived under the mercy of their [ISIS] rules. I witnessed how they kill people and execute their rulings three times.” 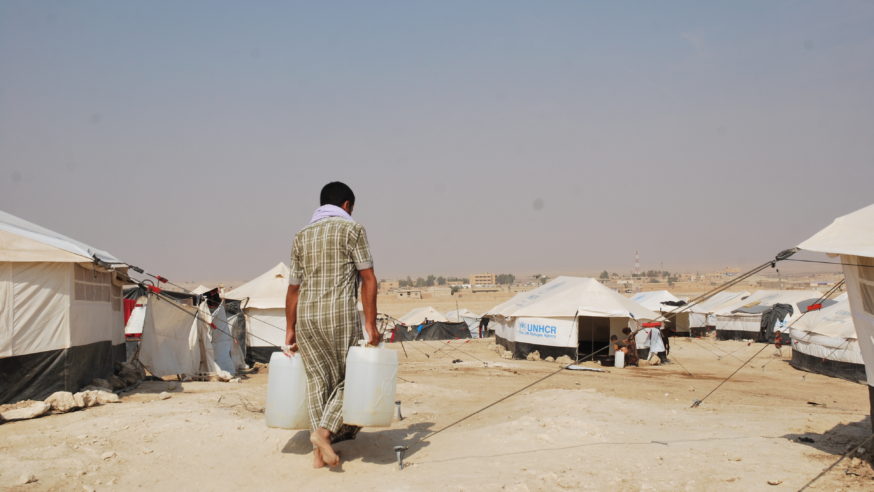 She Convinced Him to Keep Going

Mahmud, a man in his forties originally from al-Bukamal, told SyriaUntold via Whatsapp that the hardest bit of his journey was after reaching the Syrian-Iraqi border, because he was fully aware it was filled with landmines.

Mahmud was a wedding photographer living in an ISIS-controlled area, until he was ratted out by an informer working for ISIS who accused him of sending photos and video clips to western media outlets.

A resident of the al-Hawl Camp for the last two months, Mahmud still remembers those tough moments. “They raided my shop on December 2 [2016] and led me to prison for interrogation but couldn’t prove anything after going through my gear and my phone.”

He adds that ISIS confiscated everything in his shop, “and a judge ruled I get 70 lashes in a public square for practicing a forbidden profession. I also had to take a Sharia course for two weeks.”

After these events took place, Mahmud decided to flee al-Bukamal with his wife and two young children. He agreed to pay 400,000 Syrian Pound (SYP) (the equivalent of $800). It was hard to save that amount of money given his salary was a mere 75,000 SYP per month, but a quick and short trip was necessary for him to escape. However, it turned out to be a dangerous experience.

On December 23, the smuggler informed Mahmud that they would leave that same night. They headed by car to the al-Suwar town, north east of Dayr az-Zawr, before continuing to the town of Markadah in the southern al-Hasakah countryside. Yet all attempts to sneak into the Kurdish areas failed.

They then headed for the Iraqi border, but as soon as they arrived, Mahmud pleaded with his wife “to go back and not risk our lives. But she convinced me to keep going instead of returning to certain death in Dayr az-Zawr,  and a very possible death on the way back. Perhaps this was the only option we had to survive. That’s why I tried again.”

Their second attempt also failed due to heavy rain and strong winds as they were trying to cross the mine fields. They were forced to go back and stay put with the Bedouins. “All the credit goes to the woman who [gave us shelter in her tent]. She drew us a map away from the mines planted by ISIS along the border. After that, we got to Rajm as-Salibi. The trip took us five days,” said Mahmud. 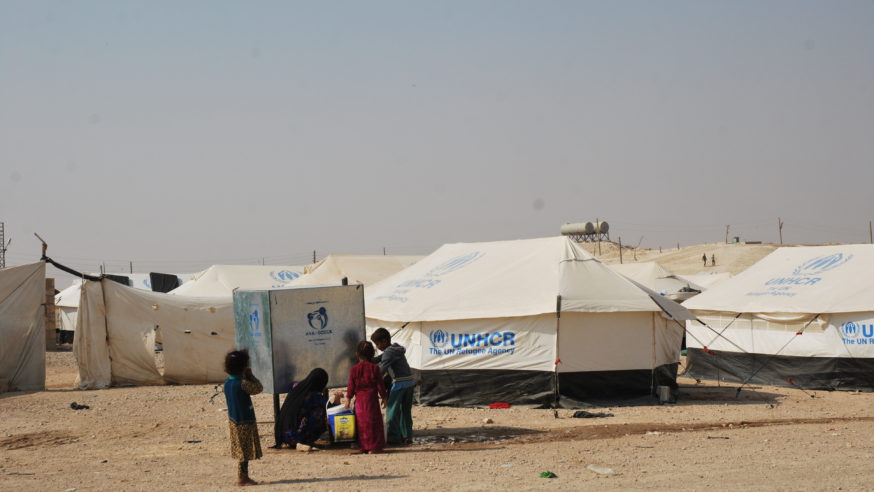 A displaced woman with her children fill up drinking water from a water tank in al-Hawl Camp in al-Hasakah province. October 24, 2016. Source: Kamal Sheikho/SyriaUntold

Suad (33), from Raqqa, decided to “escape hell” with her husband, as she put it. “The residents of Raqqa live in a ghost town,” she told SyriaUntold via Whatsapp.

She talked about her tragedy and her family situation: “My only daughter is eight years old. She has osteoporosis and we have to take her to a specialized hospital in Damascus every three months, or she will be paralyzed and die.”

Suad said that ISIS officials gave her permission to leave Raqqa to go to Damascus as long as she mortgaged her house [as guarantee of her return]. She added that they prevent civilians from leaving their areas by threatening to confiscate their papers or to fine them or punish them according to their interpretation of Sharia. Those who are allowed to travel need to provide guarantees either through offering money or mortgaging property or having a family member guarantee their return.

After clashes escalated in the northern countryside of Raqqa and ISIS took over Palmyra again on December 10, the extremist group banned all civilians from leaving the area. It ordered all land crossings be closed. “That’s when we decided to sell the house for one million SYP ($2,000). We paid half to the smuggler and the other would be for us to get to Damascus [via plane from the Qamishli airport]. Then we’ll see what happens,” Suad explained.

Due to the heavy clashes in the northern countryside, the smuggler had to take the roads on the Iraqi border. But upon arrival, Suad panicked. “I was walking and felt like I had stepped on a mine and that it will explode and  die in my homeland. But when I looked at my daughter and my husband, who was aching for salvation, I got the power to keep walking.”

On December 25, Suad and her family reached Rajm as-Salibi after a journey that lasted eight days. Given her daughter’s condition, they were immediately taken to the al-Hawl Camp. Today, the family of three lives in a small tent that doesn’t protect them from the cold winter, while they patiently await to be allowed to travel to Damascus.

Suad concluded: “There is less than a month left to my daughter’s medical appointment. We have come a long way and risked our lives, but nothing is harder than the wait.”

She and others fleeing from Raqqa and Dayr az-Zawr, who amount to almost 5,000 according to the al-Hawl Camp’s administration, are now waiting to travel to Damascus as well as other locations to leave behind their tragic past.