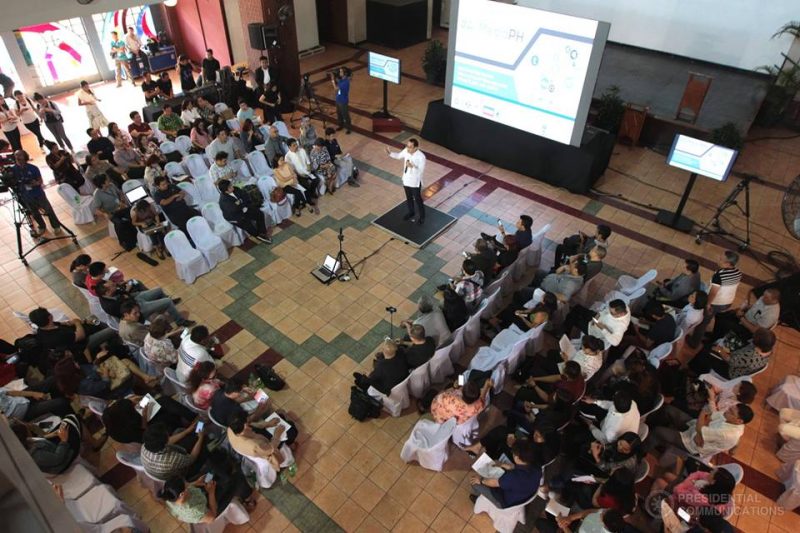 The Presidential Communications Operations Office (PCOO) organized a Social Media Policy Town Hall event to announce the creation of a Social Media Office, unveil the guidelines on how PCOO employees can use social media, and consult the public about the framework for social media accreditation.

Last month, Philippine President Rodrigo Duterte agreed to the request of his online supporters to document his activities inside the presidential palace. It led to the discussion of whether the government can give media accreditation to bloggers. This was also proposed during the previous administration but it was refused after mainstream media groups cited the issue of accountability and professionalism involving bloggers and other netizens.

During the Social Media Policy Town Hall, the PCOO discussed the draft guidelines for media accreditation of bloggers. Bloggers or social media publishers with at least 1,000 followers can apply for accreditation. They must have editorial independence, they are barred from endorsing commercial products, and they have to follow the PCOO’s code of conduct. In particular, they should refrain from using “offensive, inflammatory, or provocative” language. Further, accredited bloggers should post all press releases and statements of the PCOO. 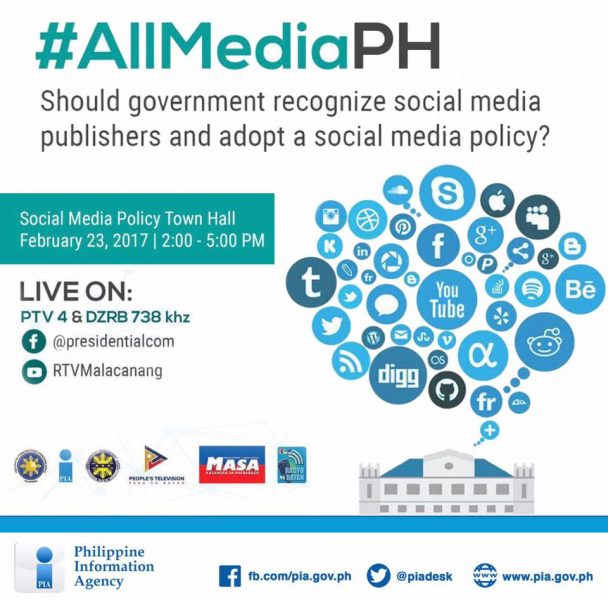 An online poster announcing the Social Media Policy Town Hall. Image from the Facebook page of the Philippine Information Agency.

In a press statement, Presidential Communications Secretary Martin Andanar mentioned the reason why the government drafted the social media policy:

We’re in interesting times wherein we are seeing bloggers with names become bigger than anyone… It’s a phenomenon that we have to embrace, at the same time we also have to control.

Danilo Arao, a journalism professor, highlighted this quote in his critique of the government’s social media policy:

He described the 10-page draft memorandum as a “self-serving” document that “seeks to make mouthpieces of accredited social media users.”

He explained further how the draft disempowers bloggers as critical and independent reporters:

This essentially reduces the accredited ones to mere mouthpieces of the PCOO. And when analyzed in the context of one of the guidelines that they should “not use language that is offensive, inflammatory, or provocative” (PCOO, 2017, p. 7), it becomes clear that contrary views are unacceptable lest they be misinterpreted as provocative.

Noemi Lardizabal-Dado, a speaker during the town hall, reiterated that bloggers should not be required to publish everything what government officials are saying or doing:

…it is not a matter of sharing press releases as part of our responsibility. Bloggers are independent minded and have the freedom of choice which press release to share or write about.

Antonio Contreras, another speaker in the town hall, reminded the government about the consequence of strictly regulating social media users:

The moment you begin regulating it (social media), you are constraining it.

Blogger Trixie Angeles warned that the proposed code of conduct can stifle the creativity and freedom of bloggers:

This code of conduct is very worrisome. Social media is like the ‘wild, wild west.’ If traditional media is the very proper east coast, we're the wild west. The reason why we have such a wild reach is because we are a little free-er in our speech.

Tess Termulo, another blogger who participated in the event, echoed a similar point:

What would be considered as “offensive”? Does offending feelings considered offensive? With the arguments online, it is easy to be “offended”.

Among those who attended the town hall were pro-Duterte bloggers who were initially granted the privilege of interviewing the president inside the Malacanang Palace. They were also part of the group of bloggers who petitioned the government for media accreditation.

Citizen engagement, not news broadcasting, is the reason citizens want access. Feedback to govt, not newsmaking, is the point. #AllMediaPH

#AllMediaPH this move is mixing accreditation and establishment of social media group. Take note of that.

The town hall succeeded in gathering bloggers who are interested to join other journalists in covering the president's activities. It allowed the government to determine the views of bloggers about its proposed social media policy. There are several objections to the content of the memorandum, but fortunately the PCOO said it will consider the suggestions and views raised during the town hall. The office will release an updated memorandum this month.