More Than a Century Later, Ethiopians Are Still Debating Their Victory Against Italian Colonialism 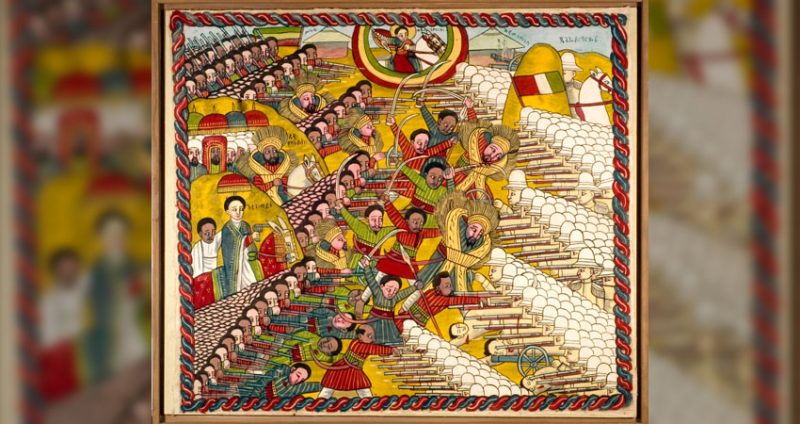 A painting the Battle of Adwa. Image: National Museum of World Cultures. CC 3.0

The Ethiopian Empire stunned the world on March 1, 1896, when it won a decisive victory against the Kingdom of Italy at the Battle of Adwa, cementing Ethiopia's sovereignty against Italian encroachment.

Italy's army suffered heavy casualties, losing an estimated 7,000 soldiers, and another 1,500 were wounded and 3,000 taken captive.

The victory established Ethiopia as a sovereign state in an era when Africa was being carved up by European colonists. During this period, Western powers conquered almost all of Africa, except Ethiopia and Liberia, making the Battle of Adwa a historical anomaly, and the story is increasingly accessible to readers today, thanks to historians like Raymond Jonas and Harold Marcus, who have published pivotal research on this event.

Ethiopian Internet users commemorate the battle's anniversary with debates about its historical implications and the accuracy of the information we have today about the conflict, all in the context of Ethiopia's contemporary political complexities and flaws.

One of the frequent claims in online debates is the idea that the victory at Adwa didn't deliver freedom and independence equally to all ethnic groups in Ethiopia. Ethiopian nationalists tend view the battle as a powerful symbol of black anti-colonial resistance not only for Ethiopia but also for all Africa. However, ethno-nationalist political rivals, like the Oromos, often fire back that these triumphalist narratives used to describe the Adwa battle are biased and presented entirely from the perspective of Ethiopia’s ruling class.

This can lead to debates about the nature of Ethiopian identity, and whether it should be based on civic nationalism or ethnic ties. Most common in the country's Amharic-speaking communities, Ethiopian nationalism traditionally promotes “cultural unity” and asserts that Ethiopians are a nation.

The role played in 1896 by Emperor Menelik, the man generally credited with the victory at Adwa, is also part of the debate online today.

Ethiopian nationalist Internet users often depict him as modern-day Ethiopia's luminary father, while ethno-nationalists have described him as “a rogue.”

Facebook user Tsegaye Ararssa said he considers the Battle of Adwa to be “a colonial war among competing colonial empires, despite the participation of subject peoples as foot soldiers.”

Adwa is anything but a black victory over a white colonizer. Adwa was a moment of self-hating denial of blackness. Nothing typifies this more than the emphatic Menelikan disavowal of his blackness when he was invited to be an honorary president of the global association for the improvement of the life of the “Negro”. By saying “I am not a Negro; I am Caucasian,” Menelik stipulated that he is “an honorary white man.”[…] Adwa was the inaugural moment for the birth of racialized hierarchy between and among the peoples of Ethiopia.

Yetneberk Belayneh, however, contended that the victory is actually “a symbol of multi-ethnic cooperation”:

From the perspective of modern world history, Adwa represented a struggle for national independence waged by a coalition of diverse ethnic groups.

The wonderful leadership and mobilization role of King Menelik II and the national patriotism of diverse leaders […] the participation of 100,000 troops from dozens of ethnic groups from all parts of the country is the “mysterious magnetism” that holds Ethiopia together to win the Italian colonial army at the Battle of Adwa.

Writing for “Tigrean Press,” Tecola Hagos argued that the battle shouldn't be considered the first victory of an African nation over a European nation. It says:

According to The US Army Infantry Magazine on the Battle of Adwa:-

“Historians consider the Battle of Adwa, culmination point of the Italo-Ethiopian War (1895-1896), to be one of the most important events in the world. In fact, it was the ﬁrst victory of an African nation against a European counter-part since Hannibal’s successful battles against Rome during the Second Punic War 2,200 years ago.”

It's quite distressing to observe a prestigious institution, being misguided and deluded by a handful of Amhara political elite's counter-factual historical version. To demonstrate the course of history in an authentic way: the first defeat of The European colonizers by The Africans was not the Battle of Adwa held 121 years ago.

The first hefty and ignominious loss of The European colonizers was marked on January 26 1885 at The Battle of Dogali led by Raesi Alula.

The Battle of Dogali was fought on Jan, 26, 1887, between Italy and Ethiopia in Dogali, where 500 Italians fought for hours before running out of ammunition. In the end, only eight of Italy's men escaped.

Abebual Demilew noted the significance of the victory for the Pan-African movement, a worldwide campaign to encourage and strengthen bonds of solidarity between all people of African descent:

The battle of #Adwa – when #Ethiopia‘s effect realized the #Pan-#African movement.

The Battle of #Adwa is of huge significance 4 #Africa, the decimation of the continent could not be completed. #Ethiopia last woman standing

Responding to claims that Emperor Menelik II once said, “I am not a Negro at all; I am a Caucasian,” Yared Asrat wrote:

@RedSeaFisher Even if we assume that he said so, does it nullify the fact that he annihilated white colonialist at the battle of Adwa??

Wondwossen Teklu pointed out the imbalance of military strength between the two armies:

Unapologetically Am proud of the Victory of Adwa . The battle of Adwa was between the “Civilized” Colonizer Vs Ethiopian farmers. pic.twitter.com/7zipsMZUu5

One Twitter user noted the contribution of Empress Taytu Betul, the wife of Emperor Menelik II, during the war:

The fearless Empress Taytu Bitul with her own army at the battle of Adwa #Ethiopia ??? pic.twitter.com/UczvPK7eo9

The empress was Emperor Menelek II's third wife and the founder of Addis Ababa, Ethiopia's capital city. She led her own military unit during the war.

On Facebook, Wondwosen honored the anniversary by sharing information about a book about the Battle of Adwa:

As we approach Victory Day, it is only appropriate to recommend an excellent book dedicated to it: The Battle of Adwa: Reflections on Ethiopia’s Historic Victory against European Colonialism. The book is edited by professor Paulos Milkias and professor Getachew Metaferia, and several renowned scholars have contributed chapters to the book. The book offers an in-depth treatment of the Battle of Adwa, and its political, diplomatic and military antecedents and outcomes. The book covers, with astonishing detail, events leading up to the battle, how the battle itself unfolded, and its far-reaching consequences thereafter. It is one of the most instructive books on the Battle of Adwa, and to top it all, it is freely downloadable here: http://www.sahistory.org.za/…/paulos_milkias_getachew_metaf…

The Battle of Adwa is part of the foundation of Ethiopian history, and that significance to the country's national identity also makes it one of the country's most hotly contested collective memories.