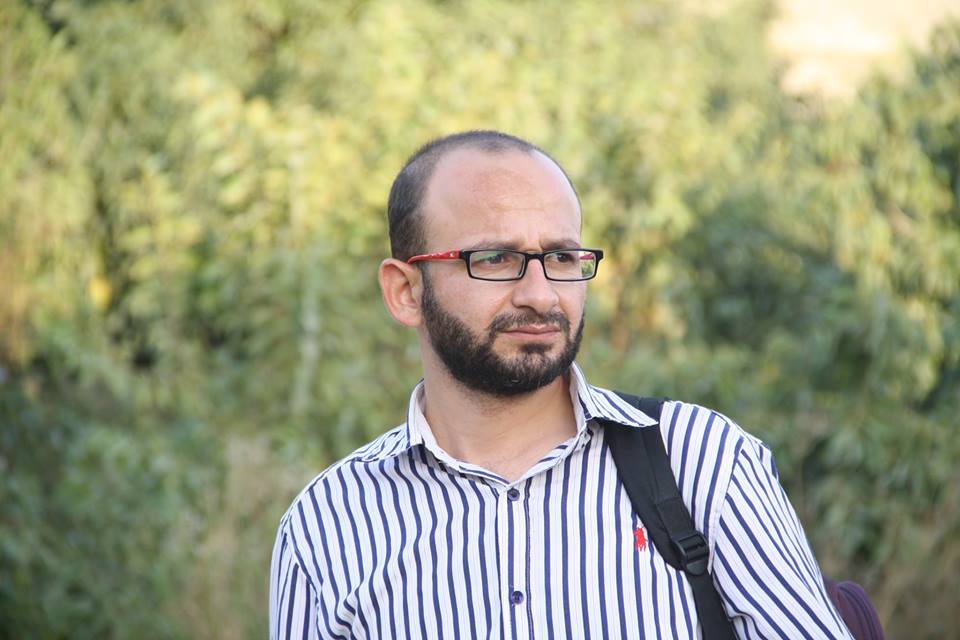 Sami al-Saai has previously been arrested by Israeli authorities for “incitement” on Facebook. Photo credit: the journalist's Facebook profile

The Palestinian Authority (PA) is facing accusations from rights groups of subjecting Sami al-Saai, a news editor and a reporter, to “brutal” torture.

Al-Saai was arrested by Palestinian Intelligence Services on February 2, 2017 in his hometown, the West Bank city of Tulkarem, when he was summoned for investigation. He was charged with ‘inciting sectarian strife‘ in Facebook posts. On 8 February a court ordered his release on bail. Al-Saai paid the bail, but was not released. He was instead transferred to Jericho Prison.

After spending 20 days under arrest, Al-Saai was released on 22 February from Jericho prison where he says he was tortured by Palestinian Intelligence Services.

Under Palestine's Basic Law, any person accused of a crime is innocent until proven guilty. The law further guarantees that “Crime and punishment shall only be determined by the law” and that “punishment shall be imposed only by judicial order” (Article 15).

Al-Saai works for the local and independent Al Fajer Al Jadeed TV, where he reports on local political developments in the governorate of Tulkarem. In 2016, in a project unrelated to his work at Al Fajer Al Jadeed, he submitted a series of reports on Palestinian political prisoners in Israel and the West Bank to Hamas, the militant Islamist movement that governs the Gaza Strip and is the main political rival to the nationalist Fatah party, which controls the Palestinian Authority. Al-Saai suspects that this work was the pretext for his arrest.

Reports about al-Saai's torture first surfaced after his mother visited him in prison, where he told her that he was tortured each day and told to confess to crimes he never committed. She said that her son was beaten and hung from door frames and windows. He was forced to stand for very long periods of time, deprived of sleep for days, and confined in a very small cold cell with no mattress or blankets. Al-Saai also told his mother that he was injected with an unknown drug four times a day.

Speaking to local media, his wife had warned that he might die of torture. “Open a funeral house for me, you will hear about my death soon,” al-Saai told his wife in a distressing message delivered through his mother.

The Palestinian Public Prosecution flatly denies these reports, saying it inspected the detention site in Jericho and found no evidence of torturing detainees there.

The Palestinian Journalists Syndicate also denied that al-Saai was tortured. The Syndicate said in a statement that when a group of its members visited al-Saai in detention, he confirmed to them that the news about his torture was only false rumor. Al-Saai retracted his statement later after his release, explaining that he was afraid to speak up because he was under threat.

Shortly after his release, he spoke out about what had actually happened to him in prison in a phone call with Fadi Arouri, a Palestinian photojournalist from Ramallah and one of the most followed commentators on Facebook in Palestine. Al-Saai told Arouri:

Al-Saai also said that authorities opened his Facebook account and read his conversations with other people, and that the central investigative office of the Palestinian Intelligence Services offered him “protection, money and a promising career in media in exchange for his confession.”

The Journalists’ Syndicate, whose vision is to defend “Palestinian Journalists’ professional, economic, social and human rights and supporting freedom of expression in Palestine,” has yet to react to al-Saai's new revelation. In its previous statement, the syndicate asserted that the journalist's arrest was not related to his media work, nor is it a case of press freedom violation, and that journalists, by virtue of their job, are not exempt from abiding by the law.

In his conversation with Arouri, al-Saai explained that he had worked on a four-month project submitting reports with a list of Palestinian political prisoners in Israel and in the West Bank city of Tulkarem to Hamas. While he was in prison, Palestinian intelligence services accused him of receiving funds to recruit new members for Hamas. Al-Saai denied these accusations and noted that there is no law that forbids journalists from working with political organizations.

Al-Saai has previously been arrested for his online posts. Last year, the Israeli authorities arrested and charged him with ‘incitement’ on Facebook. He was sentenced to nine months in jail, and was released in November 2016.

Whether al-Saai's arrest by the PA this time was related to his work as a journalist or not, the torture of Palestinian prisoners, including journalists and activists, at the hands of the Palestinian Authority is a serious issue. Human Rights Watch documented numerous cases where Palestinian journalists were detained, harassed and tortured for expressing their criticism of the PA, or for their affiliation with its rival party Hamas.

The Palestinian Center for Development and Media Freedoms (MADA) documented 134 cases of violations of media freedoms in 2016 in the West Bank by the Palestinian Authority and in Gaza by the Hamas government. This includes, among others, summons and interrogations, detentions and arrests, prevention of coverage, physical assaults, equipment confiscation, and raids against journalists’ homes or media institutions.