Kenyans Get an Early Start on Their Summer Election Season 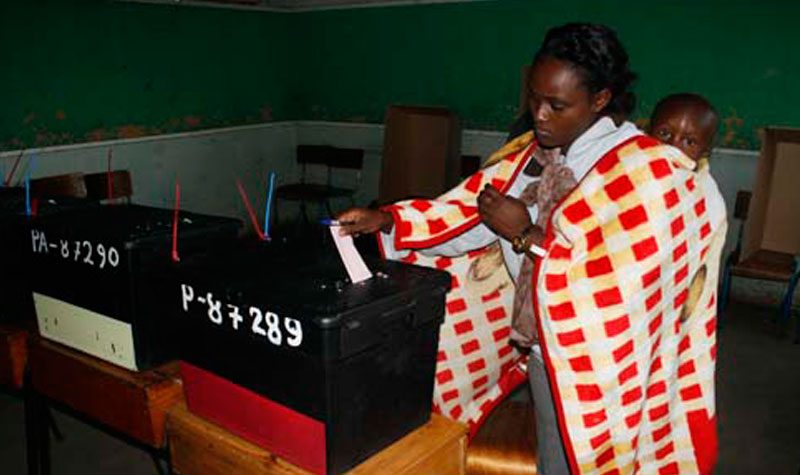 Kenyans don't go to the polls until Aug. 8, but election fever is already gripping the country. On Twitter, one trending hashtag is #NotWithMyVote, which people are adding to tweets about their political hopes and fears.

Corruption has been a central theme in these tweets, and many Kenyans, arguing that corruption is holding back the nation's development, are now calling for the ouster of incumbent politicians.

Twitter users have reason to be angry; according to a 2016 survey by PriceWaterhouseCoopers, Kenya is the third most corrupt country in the world.

#NotWithMyVote should i vote for leaders who DAB????? I rather chew it??

Mecha was referring to a controversial campaign by the president to motivate young people to register to vote, #UhuruDabChallenge. As part of the promotion effort, Kenyatta recorded a video of dab moves at the State House with a popular local dance group called FBI.

Tyson Wakhanu also stated his reasons for refusing to support the government:

A national strike by doctors and lecturers is also influencing voters. Earlier this month, a court ruled that members of the Kenya Medical Practitioners Pharmacists and Dentists Union, a union body that governs all Kenyan doctors, should be jailed over the strike.

A leader who bribes you will never be accountable to you. Do not accept bribes, vote wisely.#NotWithMyVote @CMDKenya @mukwanja

Brenda Chebet made the following observation about voter bribery:

The Center for Multiparty Democracy, CDM-Kenya, said a failure in the country's leadership is a major reason for voter bribery:

@Wavinya_Ndeti: We failed as leaders because we don't empower our people economically, leaving them susceptible to handouts. #NotWithMyVote

But “Bwana Mdogo” thought voters should punish corrupt politicians by taking their money without voting for them:

“Voters should tell aspirants that ‘I'll take your money, but I dont see quality leadership coming from you’.” @Wavinya_Ndeti#NotWithMyVote

Due to my current unemployed state,I'll take all the money dished out. Come election day I'll vote u out wth a broad smile.#NotWithMyVote

According to a report by Interthoughts Consulting, commissioned by the Center for Multiparty Democracy in partnership with Germany's Konrad Adenauer Foundation, a majority of Kenyans would vote for any politician who gives them money. The study also found that politicians recoup the money spent bribing voters by stealing from the government, once in office.

Shallom identified tribalism and corruption as the main problems in Kenya's electoral politics:

Most Kenyans are won on tribal basis. Majority of the rest won by bribe. They give you 200 knowing there is 200M to be stoln#NotWithMyVote

Rose Mute says she will protect the the country by praying and voting:

Will i stand by watch while my country is thrown into chaos by selfish leadership #NotWithMyVote I will pray and vote for good leadership .

Ahmed Mohamed says he wants a government that listens to him:

#NotWithMyVote if the doctors wont be heard..why vote for a govt that doesnt listen in the first place..imma boycott this election

#NotWithMyVote will I allow leaders who sit back and watch as Kenyans starve while they run around in search of votes.

There's never going to be a time where it's better having a thief as president. Why not give your acc. pin while you're @ it #NotWithMyVote https://t.co/DEpKcDBujh

The doctors’ strike has brought the nation's public health care system to a halt, and an unknown number of patients have died, as doctors continue to stay away from work.

Drop out of school,sell drugs,buy a degree then ask for a public office to protect this atrocity.I refuse this system.#NotwithMyVote

Francis said he wants a leader who puts development ahead of tribal politics:

While many Kenyans blame politicians for the country's problems, Tyson Wakhanu said he blames the voters:

Sorry to say the politicians are not the problem, the problem is voters. they demand bribes not manifestos #NotWithMyVote #HarshReality

Osborned Osoro said he's against the tendency of “recycling” politicians:

#NotWithMyVote will i Elect the same Old people who have been there ever since and they have brought no change in my country.

#NotWithMyVote campaign is zero work, if we already have voting robots.The mental slavery syndrome should be declared national disaster.