US Activists, on Overdrive to Respond to Trump’s Immigration Plans, Are Making New Alliances 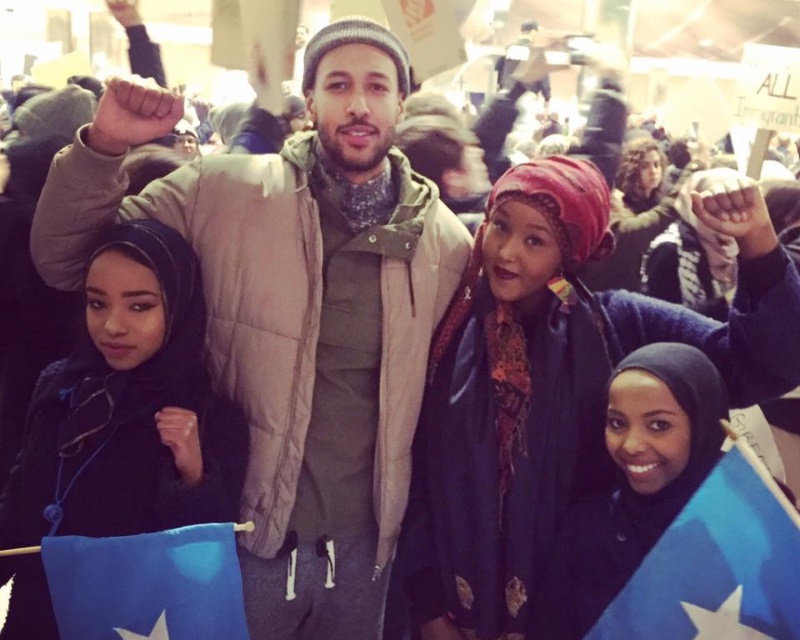 This story by Martina Guzmán originally appeared on PRI.org on February 15, 2017. It is republished here as part of a partnership between PRI and Global Voices.

Organizing is not work for the weak.

In the US city of Detroit, “activists are in overdrive,” says Adonis Flores. “Even before I shower, my mailbox is almost full. And soon as I wake up my phone starts ringing from members of the community who feel afraid and have lots of questions about the executive orders.”

He’s a Mexican immigrant-turned-activist who started working in support of the DREAM act to protect undocumented people brought to the US as children, then later the Deferred Action for Childhood Arrivals program, or DACA, in 2010.

His latest task is to organize opposition to President Donald Trump’s executive orders that give broad power to Border Patrol and Immigration and Customs Enforcement agents, and the indefinite suspension of Syrian refugees’ admission into the US and the 90-day entry ban on travelers from seven predominantly Muslim countries, which the Trump administration is considering rewriting after courts have suspended its implementation.

From his busy mornings, Flores runs to planning meetings with staff at Michigan United, the immigrant advocacy organization where he works. The office is a frenzy of activity the minute he walks in the door. The phones ring nonstop. Droves of people come in, asking for help for loved ones who are stranded in other countries and to get referrals to reliable attorneys who can help them. Volunteers constantly walk in and out. Flores sits on conference calls throughout the day, then runs to meetings across town. He says it's a crazy time.

“I have to train volunteers, call people to attend information sessions, respond to the barrage of media calls and return emails,” says Flores.

Now Detroit faces a different challenge. When Trump signed the executive order for the refugee and immigration ban, metro Detroit, home to the largest concentration of Arab Americans, felt its effects immediately.

Flores remembers being in shock when he heard the news: “The first thing I thought was, what are we going to do? We are so unprepared. It’s such short notice.”

Nonetheless, communities came together. Organizers of the Women’s March got permits to hold a rally at Detroit Metro Airport, then word of the demonstration filtered down to organizers and their networks.

“I felt energized,” says Flores. “Everyone came together so quickly. The community, the country came together — I felt a lot of hope.”

The ban and the day-to-day changes created by legal decisions on the executive orders created an unlikely esprit de corps among Detroit activists. Together they organize, share the latest information and use each others’ language skills to translate flyers into Spanish or Arabic.

“We have not had a very good history at collaborating with different communities in the past,” says Flores, who himself was brought to the US without proper documentation when he was 9. He’s 28 now. “After Trump got elected, there is now a sense that an attack on one community is an attack on all of our communities.”

One of Flores’ fellow organizers is Fatou Seydi Sarr, founder of the African Bureau for Immigration and Social Affairs. Theirs is a unique alliance of Mexican and Senegalese immigrants, two communities that don’t often mix. Language, cultural barriers, religion and racism keep these populations apart. But strange times call for unlikely partnerships, especially if they are all working toward the same agenda.

Sarr is a leader of Detroit’s West African community, and as an activist she faces her own unique set of challenges. Her community has been on the fringe of social justice organizing for years.

“It’s hard to get African immigrants from Guinea, Senegal and Mali out to protest against the Muslim ban,” she says. “West Africans don’t organize and protest because they feel they will get arrested. It’s a risk for them. They know they will be a target because the over-criminalization of black American men impacts African immigrants.”

Sarr says she often feels exhausted by the demands of organizing. West African immigrants in Detroit commonly communicate through texts and phone calls, and some speak only French. The silver lining, she says, is using the wide opposition to the ban to reach leaders she had not connected with before.

“I was able to have African leaders from the Kenyan community show up at Detroit Mayor Mike Duggan’s meeting addressing the ban,” says Sarr. “And with the support of Adonis Flores, we secured a Know Your Rights event with the president of the Guinea Association.”

Sarr immigrated to the US because she was studying in Paris when she met a tourist from Detroit. They fell in love, got married and moved to the motor city. She is fairly new to being an activist; she first joined the struggles of black Americans after Trayvon Martin was murdered in 2012. “I was out on the streets when Trayvon and Mike Brown and Ranisha McBride was shot,” says Sarr, who was 35 years old at the time.

Detroit has experienced extreme crises in the last decade. The appointment of an emergency manager, mass water shutoffs, environmental injustice and and an abysmal public school system have forced people to take to the streets — with little support from white people in the protests.

But Trump’s presidency has been a call to action for people who had not previously been politically active. Millions across the country have taken to the streets before and after Trump’s inauguration. Sarr says she’s seen a change particularly in how white people in Detroit are taking on the causes that have long been important to her. “I am not mad at them,” she says, “but I do recognize their privilege. The ban is now making people look at the system differently now that their their way of life is being attacked.”

Longtime organizer Asha Muhamed Noor works across town from where Sarr lives. Her office is in Dearborn, just outside Detroit. The neighborhood is dotted with multiple restaurants, bakeries and a mosque in this mostly Yemen community.

Noor is an advocacy specialist for the campaign TAKE ON HATE, led by the National Network for Arab American Communities. The campaign is a grassroots effort challenging discrimination against Arab and Muslim Americans and refugees in the US.

Unlike Flores and Sarr, Noor has been organizing since she was 16. She’s now 26.

“I started working around issues with Somali youth. Somalis have been targeted for a long time. I used to organize protests at the State Department,” Noor says of the years she lived in Washington, DC. “My family was at a protest weekly. They marched for Palestinian rights, against the bombing of Somalia, for DACA or immigration. We are very politically active and engaged.”

Noor says everyone [in Dearborn] knew someone who was being affected by the ban. “We started work in rapid response. Many of us didn’t sleep for the first 73 hours.”

Now that the ban has been temporarily halted by federal courts, Noor has a moment to breathe.

What surprises Noor most is not that Trump signed the executive order, but how fast he did it. “I thought, ’How could this happen so soon?’” says Noor. “He didn't wait a week before he started targeting oppressed communities. That move gave me insight into what the next four years would like be for my people.”

Now activists like Flores, Sarr and Noor are busy preparing for future executive orders that will be signed, and four years of a Trump presidency. During the week of February 14, the Department of Homeland Security conducted raids across the US and arrested more than 680 people. While the actions were similar to deportations that occurred early in President Barack Obama’s administration, Trump’s tougher stance and a lack of information fueled fears amongst immigrants.

Activists and advocates are in the thick of trying to understand the new rules while fighting battles that have been brewing for decades. And one month into the Trump administration, they’ve found resolve.

“My shock is over,” says Noor. “We are bracing ourselves for what’s next.”