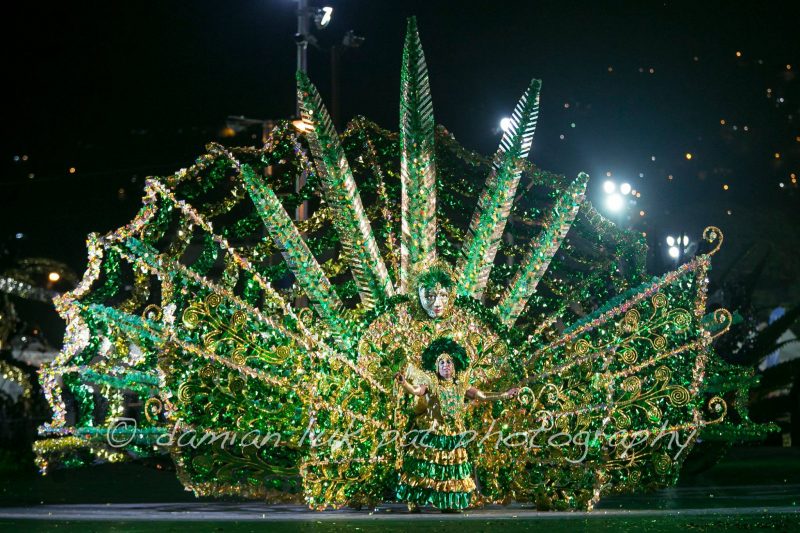 Trinidad and Tobago Carnival [2] prides itself on its traditional masquerade [3], but Carnival lovers are just as appreciative of the “big” mas — the incredible and often massive costumes that compete for the coveted titles of King and Queen of Carnival. Not only are they works of art; they are also feats of engineering!

These individual costumes are usually part of larger Carnival bands, which each have their following and portray different themes from year to year. Widely shared on Facebook, here's a quick look at some of the beauties that photographer Damian Luk Pat [4] captured as they crossed the main stage at the country's Carnival mecca, the Queen's Park Savannah, for Carnival 2017.

Carnival is an escape from the rigors of everyday life. Many Carnival King and Queen contenders transport spectators to other lands (Africa, China, Arabia) and other worlds (enchanted rainforests and underwater kingdoms). Either way, you are immersed. 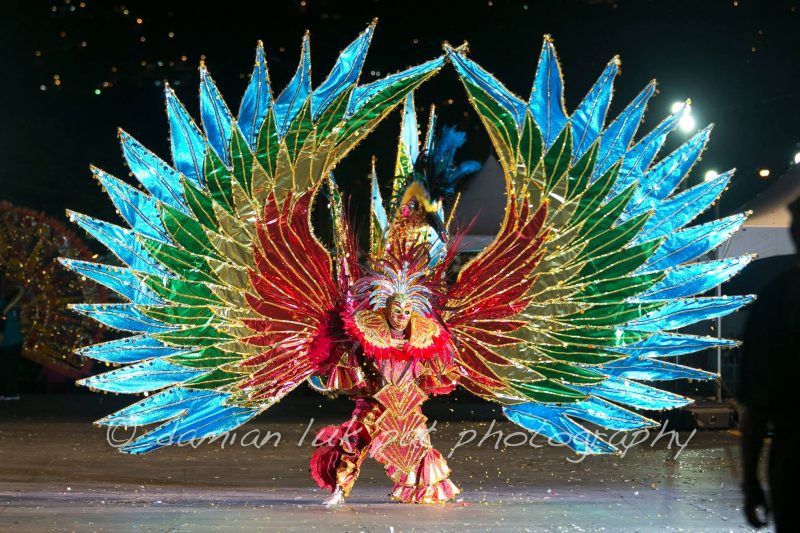 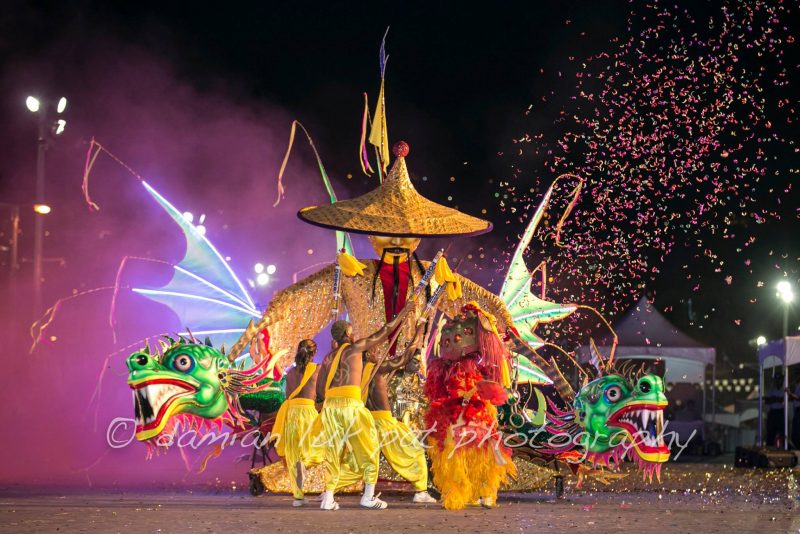 Raymond Mark's portrayal of “The Yellow Emperor And The Winged Dragons”, for the band “Chinese Dynasty”. Photo by Damian Luk Pat, used with permission.

The beauty of Trinidad and Tobago

Some costumes this year represented various aspects of life in Trinidad and Tobago. “Down de islands” (DDI), for instance, depicted in the portrayal below, refers to an idyllic cluster of islands off the north west coast of Trinidad that is home to the country's boating industry. It is also a favourite domestic tourism getaway. 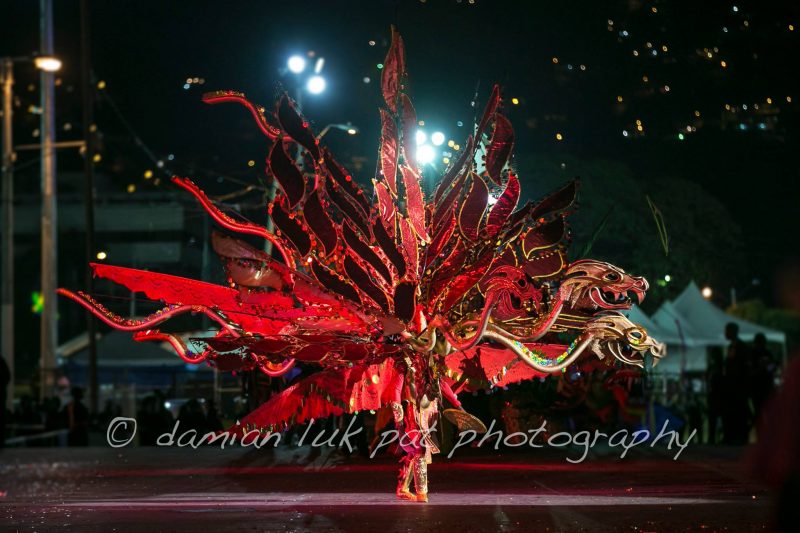 Christopher Saldenha portrays “Down The Islands” for the band Soar! Photo by Damian Luk Pat, used with permission.

The 2007 King and Queen contenders also included a nod to the country's national instrument, the steel pan [8], which was birthed in Trinidad and Tobago and is the only surviving non-electronic instrument to have been invented in the 20th century. 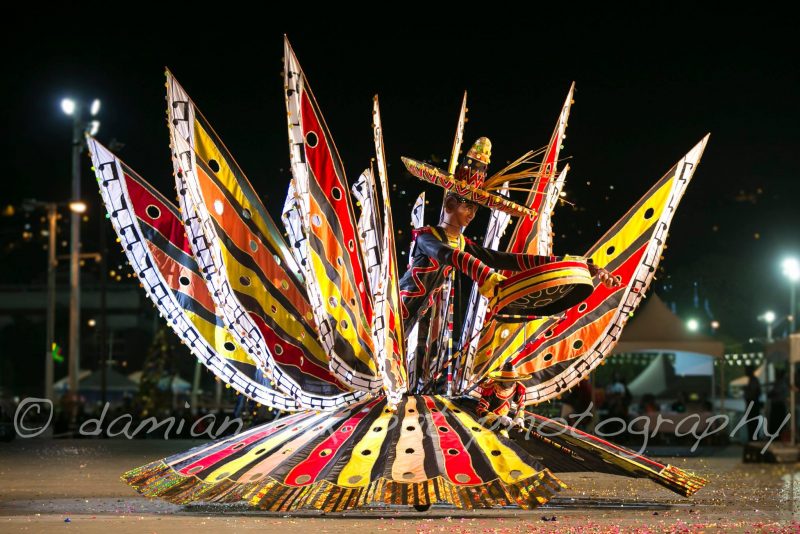 There was also a modern take on the Midnight Robber, one of the most iconic traditional Carnival characters. Reminiscent of a bad-guy cowboy with his wide-brimmed, fringed hat, the robber is very flamboyant, sporting a cape that goes well with his signature “robber talk”, which is rather highbrow and quotes liberally from biblical verses, Shakespearean monologues and other famous literary sources. The character typically uses props (fake pistols, swords and even miniature coffins) to enhance his intimidation quotient. 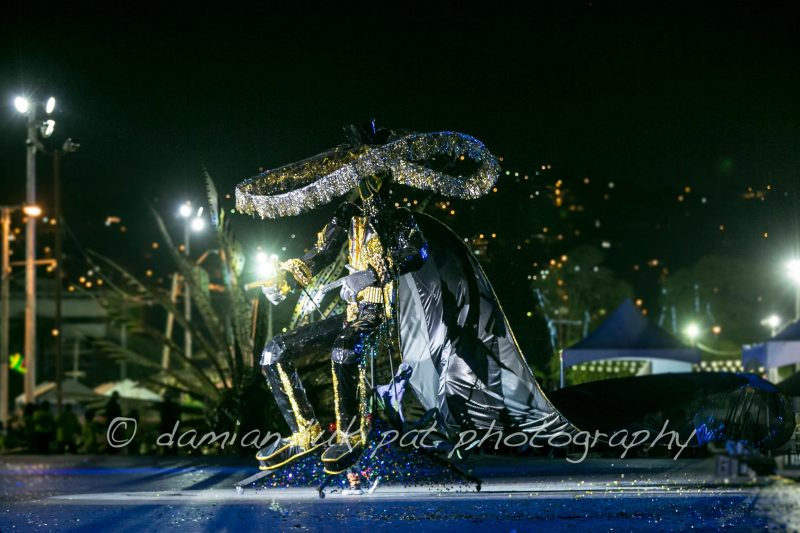 Other portrayals depicted topics of interest — social, political and otherwise — with originality and a bit of humour. The Zika threat [11] in the region and the election of U.S. President Donald Trump [12] were just two of the issues covered. 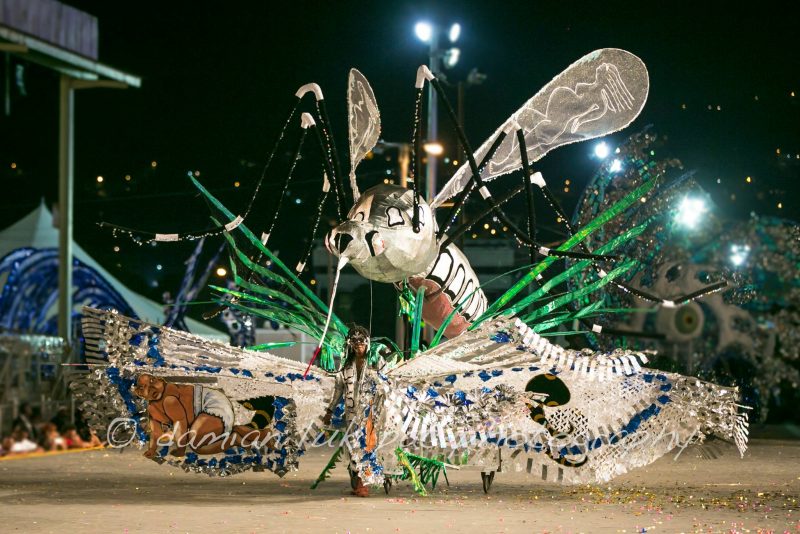 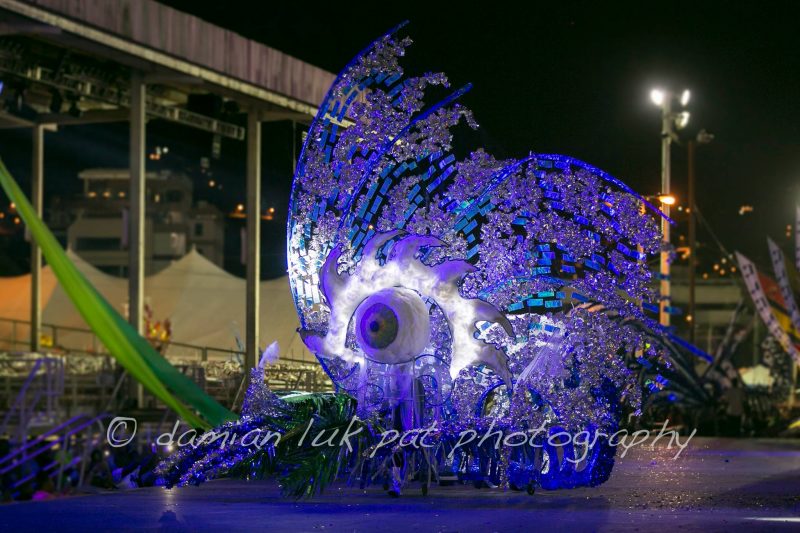 This is one aspect of traditional Carnival that maintains its allure year in and year out. Featuring colourful and elaborate headdresses adorned with hundreds of feathers, the more modern King and Queen costumes for these bands are expensive to make, due to their sheer size and the materials used. The most popular bands of this genre tend to spring from south Trinidad, with longtime band designer Kallicharan [15] leading the charge. 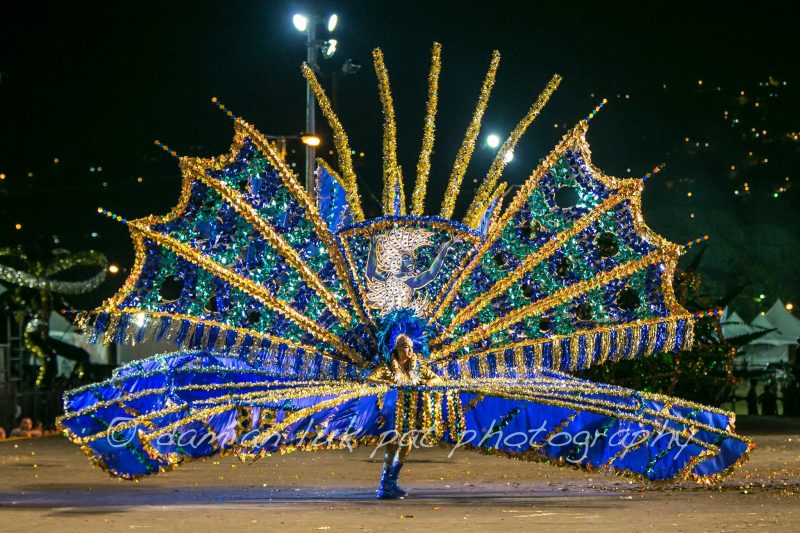 “Lady in Blue” is portrayed by Laura Rampersad for the band “Kallicharan Carnival”. Photo by Damian Luk Pat, used with permission. 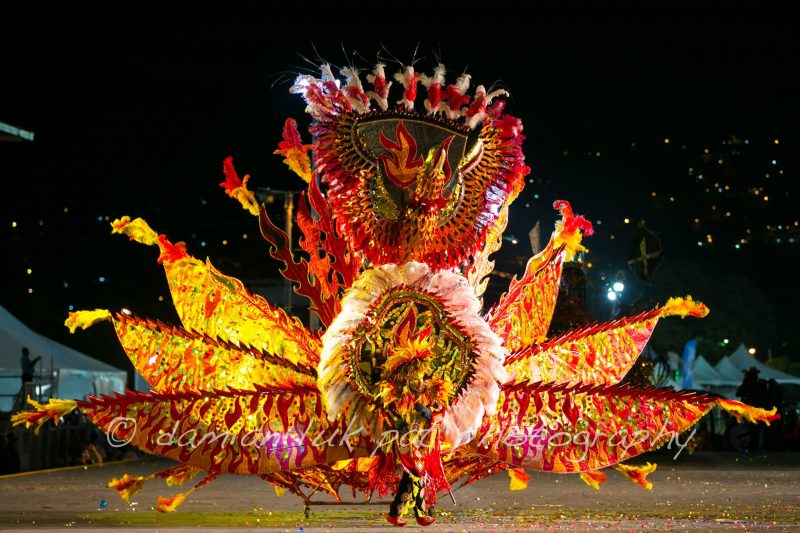 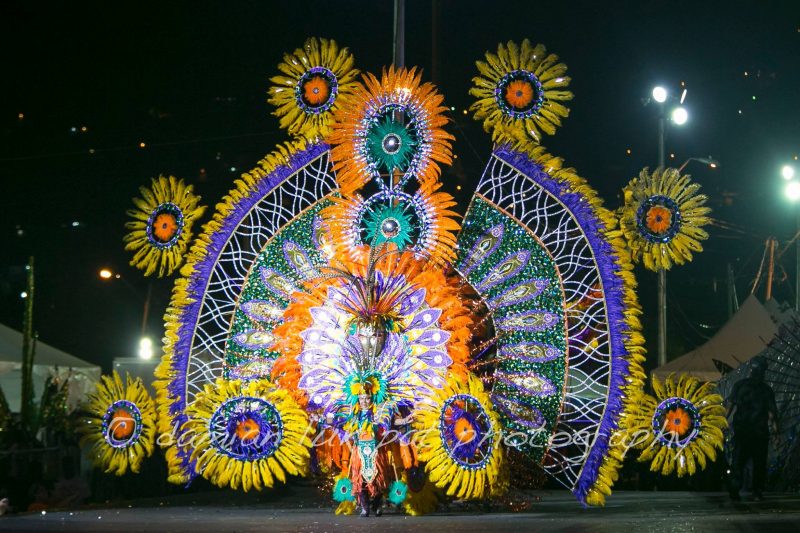 Rose Marie Kuru's “Queen Chirapaq – A Tribute to Esther Theodore” for the band “Lionel Jagessar and Associates”; it eventually placed third in the Queen's competition. Photo by Damian Luk Pat, used with permission.

It's always incredible to see how brilliantly various animals are represented in the mas — birds are a favourite, as are powerful, elegant species like tigers and mythical creatures such as dragons — and they all seem to have personalities, which the masquerader further brings to life through the dancing. 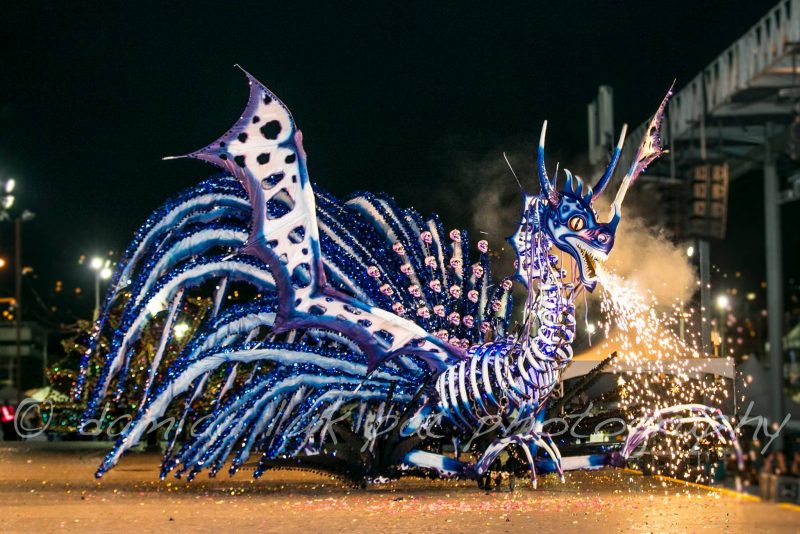 “Nazgul – Harbinger of Death”, portrayed by Ravi Lakhan in the Creative category for the band “Journey Beyond Imagination”. Photo by Damian Luk Pat, used with permission.

Veteran masquerader Roxanne Omalo’s “Sheera – The Ice Queen” actually earned the same number of points as the costume that was finally voted Queen of Carnival, but the judges’ nod went to her competitor. Still, it was a strong portrayal that made quite an impact on stage. 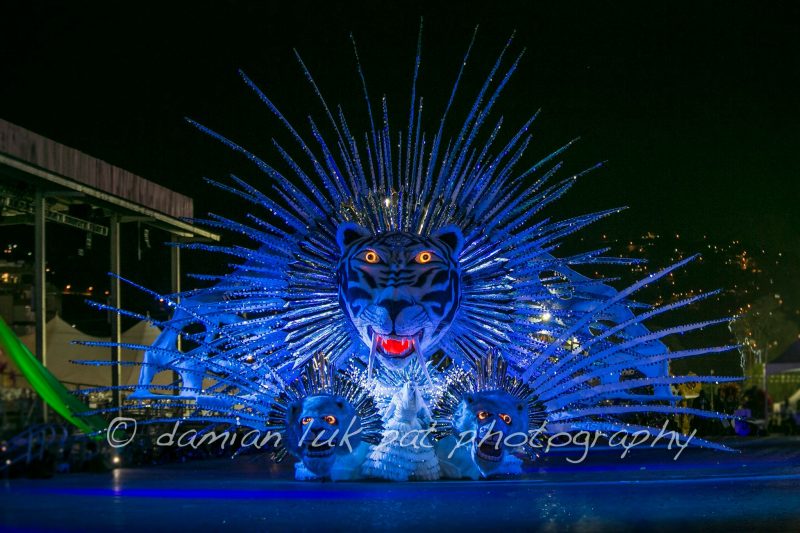 Of course, the Carnival gods are not always benevolent: the costume below experienced an onstage mishap, collapsing and breaking when the masquerader tried to open the wings. Although he bravely attempted to carry on, the weight of the costume was too great. 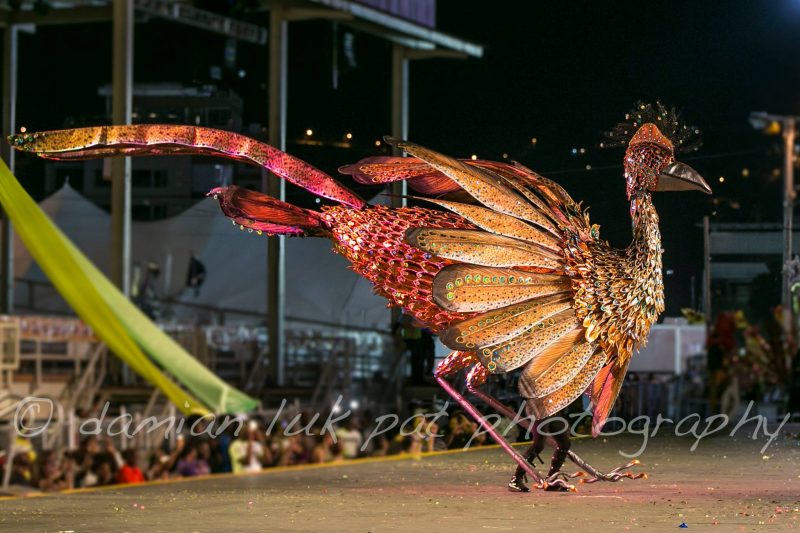 More and more common is the incidence of Moko Jumbie (stilt walker) costumes competing in the King and Queen of Carnival competition. A skill that is typically found in the traditional mas circles, it is always a joy to see these artists on stage — a stark departure from the heavy costumes that are usually borne with the help of wheels. 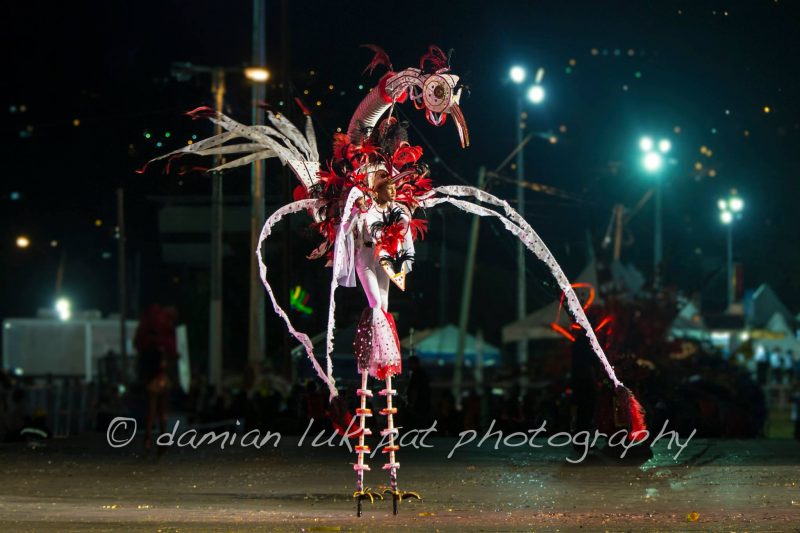 Qiana Moore's portrayal, entitled “I Am Not the Bird of Paradise, I Am a Bird from Paradise!” Photo by Damian Luk Pat, used with permission.

As dazzling as all the costumes are, someone had to win. In the King of Carnival competition, defending champion Ted Eustace grabbed the title once again, with his futuristic portrayal of “Crypto – The Lord of the Galaxy”. 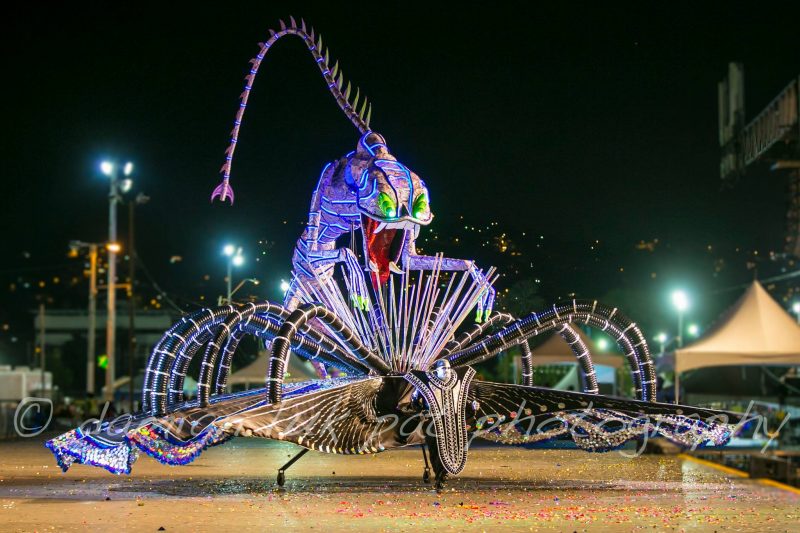 2017 King of Carnival, Ted Eustace, with his costume “Crypto – The Lord of the Galaxy”.

The Queen of Carnival honour, meanwhile, went to the captivating “De Nebula”, portrayed by Krystal Thomas for the band “Paparazzi”. 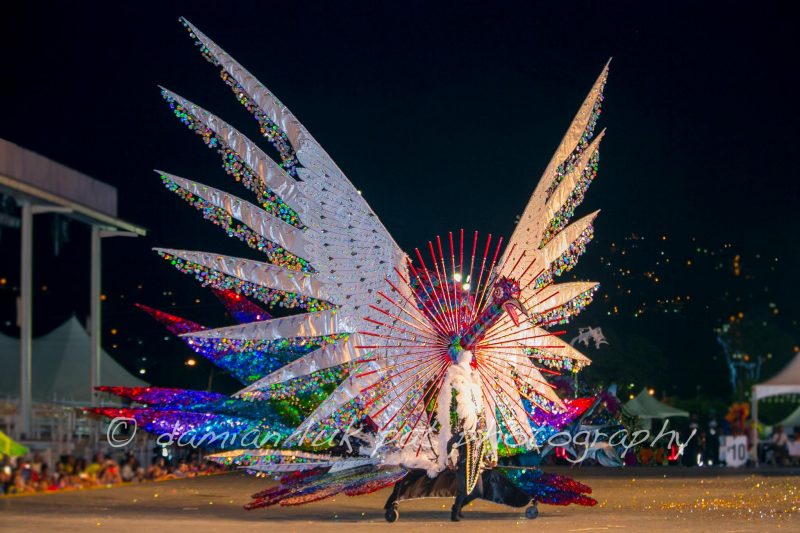 You can find the full results of Trinidad and Tobago Carnival 2017's Kings and Queens here [24].