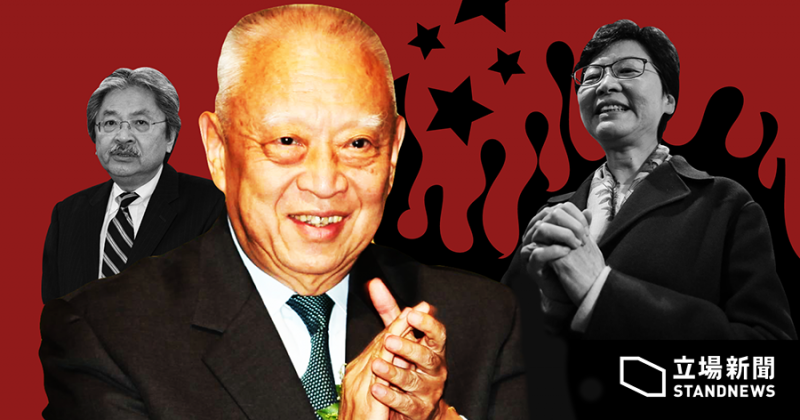 Ex-Chief Executive and Vice Chair of Beijing's top consultation body Tung Chee-Hwa said the central government would not appoint John Tsang even he wins the election. Photo from Stand News. Non-commercial use.

It's an open secret that Beijing interferes in the election of Hong Kong's top leader, known as the chief executive, despite the city's autonomy, which is enshrined in its constitution. But for the first time, a former chief executive has explicitly stated as much.

Tung Chee Hwa, who served as Hong Kong's first chief executive from 1997 and is the current vice chairman of the Chinese People's Political Consultative Conference, a political advisory body in China, suggested in a closed-door meeting that Beijing will not appoint chief executive hopeful John Tsang — even if he gets a majority of the votes from the 1,200-member election committee.

Hong Kong does not have universal suffrage, and the right to nominate and elect the city’s chief executive is restricted to the members of the election committee. Even so, Beijing has the power of appointment and could refuse to appoint the election committee winner if it doesn't approve of the result.

John Tsang is a former financial secretary who is preferred by the Hong Kong business sector and local professional groups. In early February, he made a show of his popular support with a crowdfunding campaign for his candidacy.

But he isn't Beijing's “chosen one.” In fact, Wang Guangya, the director of China's Hong Kong and Macau Affairs Office, was reported [2] to have said that Tsang was Beijing’s “least-preferred candidate.” So according to sources from several local media outlets [3], Tung explained in a meeting with advisers of his think tank that he persuaded the then-Chief Secretary Carrie Lam to run for the top job in order to avoid Beijing exercising its substantive power of appointment.

About a month ago, another member of the Chinese People's Political Consultative Conference, Chan Wing Kee, told election committee members from the business sector [4] in a closed-door meeting that if they would not support Carrie Lam, they would be viewed as standing against the Chinese central government.

Hence, Tung’s suggestion has been interpreted as a warning to the pro-Beijing election committee members who prefer to vote for John Tsang rather than Carrie Lam.

‘What’s the point of having an election committee then?’

Dennis Kwok Wing-hang from the legal sector was very angry. He criticized the central government for being excessive in exercising its power, saying the current election is undemocratic and restricted to a small circle, yet they still want absolute control, “how can they not appoint the winner?”

The chairperson of Civic Party and lawmaker Alvin Yeung pointed out that any election, as long as it is conducted according to [Hong Kong's constitution, known as the] Basic Law, the nomination and election result should be substantial. If anyone attempts to manipulate the election, it is against Basic Law Article 22. Yeung questioned Tung for violating the One Country, Two Systems principle [on which Hong Kong's autonomy is based] and the Basic Law […]

According to the Basic Law's Article 22:

No department of the Central People's Government and no province, autonomous region, or municipality directly under the Central Government may interfere in the affairs which the Hong Kong Special Administrative Region administers on its own in accordance with this Law.

In reaction to Beijing's intervention, 30 election committee members from the legal sector released a joint statement [6] suggesting that Tung's chat may have violated the law.

On Facebook, political news commentator Lai Chak Fun urged [7] Hong Kongers to be vocal in their support for John Tsang:

Within the pro-Beijing business sector, Hong Kong tycoon Li Ka-shing offered another strategy to deal with the political pressure. He declared during a public function that he will not be nominating any candidate in the chief executive race, as a way to avoid offending anyone. But he added:

But I will definitely cast my vote […] No one will know who I will vote for and I will not say it publicly.

In 2012, Li nominated Henry Tang and disclosed that he knew Beijing had chosen CY Leung two weeks ahead of the election, yet he still voted for Tang.

Li’s tactic has provided a way out for pro-Beijing election committee members, as another political commentator “Tammar Nan” pointed out [8] on independent media outlet Stand News:

For those election committee members who were afraid of offending the China Liaison Office and Zhang Dejiang [a top Chinese leader responsible for Hong Kong affairs] but don’t want to be pressed to support Carrie Lam, the only way is to follow Li Ka Shing’s example and refuse to nominate anyone.
Li even reminded them to cast anonymous votes during the election. Please stay smart!

In addition to closed-door lobby, concrete actions have been taken to make sure that Carrie Lam has enough support. Local news outlet Hong Kong Economic Journal recently quoted a source from the election committee that the Beijing Liaison Office, which represents China's central government in Hong Kong, has filled out nomination forms nominating Carrie Lam for 51 members of the Chinese People's Political Consultative Conference who are ex officio members of the chief executive election committee and asked them to sign their names. If they refused they would be reminded how they got their CPPCC membership.

The election of the chief executive will take place on March 26. In addition to John Tsang and Carrie Lam, two other potential candidates, Regina Ip Lau Suk-yee, a lawmaker and former security secretary, and Woo Kwok-hing, a retired judge, have started lobbying members of the election committee to endorse their candidacy by giving them their nomination.

Beijing most likely controls a majority of votes in the election committee, but if it fails to convince the business sector to support Carrie Lam while forbidding its loyalists from endorsing John Tsang — the more popular candidate [9]– the next chief executive of Hong Kong might end up being as unpopular as the current Chief Executive CY Leung, who is nicknamed 689 for the number of votes he received from the election committee back in 2012.