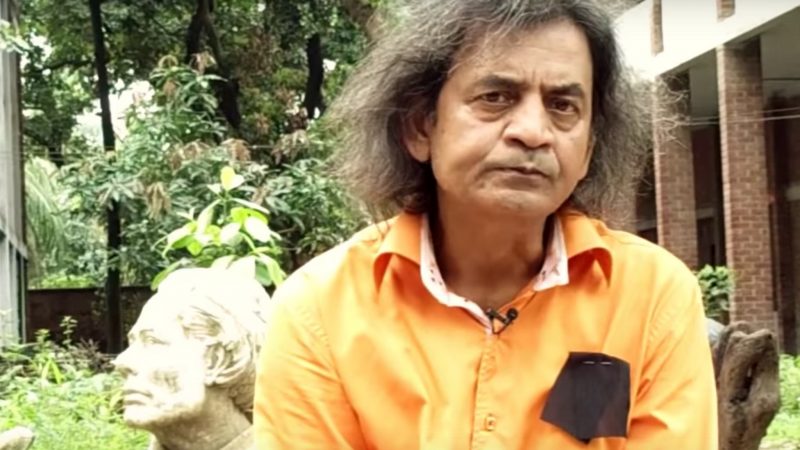 Bangladeshi painter Shahabuddin Ahmed became the first foreign artist to live in Rashtrapati Bhavan, the home of the Indian President Pranab Kumar Mukherjee, as an artist-in-residence.

The Rashtrapati Bhavan is a majestic residential complex with a lot of history located at the western end of Rajpath in New Delhi, India. Ahmed's residency was from February 18 to 22, 2017.

Ahmed is a leading Bangladeshi painter who is renowned across the world. He was born in 1950 and studied at the Academy of Fine Arts in Dhaka. In 1971 he joined the Liberation War effort for Bangladesh and fought for independence from Pakistan. In the mid-1970s he received a scholarship to study at the Ecole Superieure des Beaux-Arts de Paris and has since lived there for over four decades.

According to the Arts Trust, which promotes contemporary Indian art, Ahmed relies heavily on the power of motion as his mode of artistic expression: “His baroque like figures turned towards space seeking light and energy, are a strange mixture of Western influence rooted to his place of origin.” The artist's works are often monochromatic with splashes of bright unusual colors.

Ahmed's works are displayed in many galleries across the globe including the Olympic Museum in Lausanne, Switzerland, the Bourg-en-Bresse Museum in France, the National Museum of Bulgaria, and the Seoul Olympic Museum in South Korea. In 1992, Ahmed received the “Fifty Master Painters of Contemporary Arts” award at the Olympiad of Arts, Barcelona, besides being awarded the prestigious French title of “Ordre des Arts et des Lettres” (Knight in the Order of the Arts and Literature) in 2014 for his contribution to art. In Bangladesh, he received the Independence Day Award (Shwadhinata Puroskar) in 2000.

As part of the residency, a solo art exhibition of Ahmed's work titled “Shanti” (Peace) was held at the Rashtrapati Bhawan Museum Art Gallery. The collection comprised of 12 paintings of iconic figures of freedom like Mahatma Gandhi, Rabindranath Tagore and the architect of Bangladesh's independence Bangabandhu Sheikh Mujibur Rahman.

Shahabudding told in an interview with the Asian Age why he titled the exhibition as “Shanti” (Peace):

The south Asian continent is becoming a super power and the world is looking towards us. We are young, robust and have the strength to lead a peaceful life unlike the Western world, which is thriving through sale of weapons. We have never used weapons for power. With the teachings of Mahatma Gandhi, India and Bangladesh have shown the world that we have won wars through non-violence.

In 2013, Indian President Mukherjee started this ‘In-Residence’ programme for scholars, artists and writers with the aim of encouraging the creative and innovative potential of people and open up Rashtrapati Bhavan for greater participation and involvement of ordinary people in its activities.