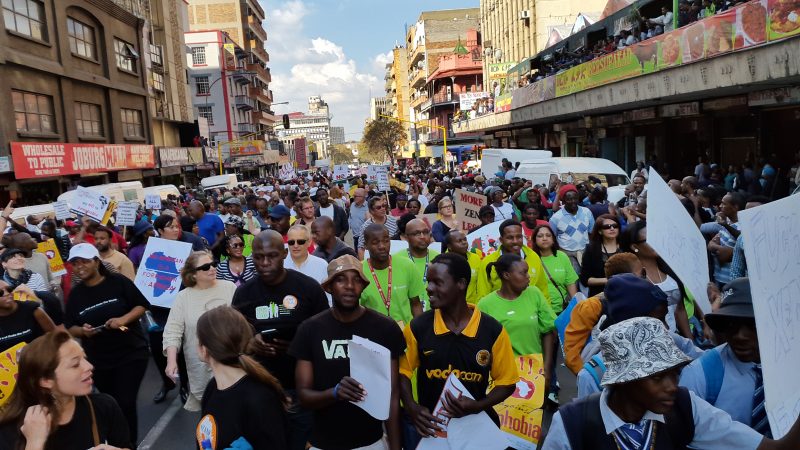 South Africa is currently in the midst of another wave of attacks against African immigrants. This week in Pretoria and Johannesburg, crowds shouting xenophobic slogans looted and burned down businesses and homes owned and occupied by foreigners.

Similar violence gripped the country in 2008 and 2015, when rioters killed several people and destroyed large amounts of property.

On Friday, police fired stun grenades and rubber bullets to disperse clashing crowds of anti-immigrant protesters and immigrants in the capital, following a large anti-immigrant demonstration.

Protesters blame immigrants for the country's high crime rates — particularly when it comes to prostitution and illegal drugs — and accuse immigrants of taking jobs away from South African citizens. According to estimates, roughly 2.2 million immigrants now reside in South Africa, which is one of the continent's main destinations for asylum seekers.

According to South African President Jacob Zuma, South Africans are not xenophobic, but they are are fed up with crime, he says.

Many Internet users have condemned the latest wave of attacks against immigrants, and some have offered theories about why xenophobia seems to appeal to lots of people in South Africa.

On Twitter, Leandri J van Vuuren said the whole thing boils down to the government's failure:

Cause of #xenophobia in South Africa: scarcity of resources, lack of housing, service delivery, education & jobs. Government is failing us.

Every society in this #madworld has deep social problems but #Xenophobia is not the solution, we shall be ashamed. South Africa stop it.

South Africa…this is not the rainbow nation you used to be! ? #Xenophobia #enca #SABCinquiry

Noting that the protests and violence have mostly targeted foreigners from African countries, Amandla wrote:

“South Africa belongs to all who live in it” is non-applicable to African nationals but applicable to white foreigners? Sidakiwe la eMzansi.

Samba Thiam, head of the Economic Bureau at the Embassy of Senegal in South Africa, shared his personal experience on Twitter:

Associating foreigners with crime is so silly. Have been facing xenophobia since day-1 in South Africa as diplomatic agent. Still dealing!

Some argue that the term “afrophobia” should replace “xenophobia”:

@shewolfmo there is no xenophobia in South Africa, it's afrophobia Indians, Pakistanis and White people not affected by these attacks

At this rate, we might have to think about dropping the “Africa” from South Africa. #Xenophobia #XenoMarch #Xenophobicattacks #TshwaneUnrest

South Africa needs to go for a psychological evaluation of sorts… something twisted in the way we view things. ? #Xenophobia

xenophobia, journalists need to do stories on how the region helped southafrica during apartheid, maybe ignorance can change to knowledge?

Today is one of those days that I am ashamed to say that I am South African. #NoToXenophobia

Those who support the demonstrators reject the label “xenophobia.” Joe Selimo, for example, argued that South Africans are fighting drugs and prostitution, not immigration or foreign culture:

Why is it #xenophobia when south Africans fight drugs nd prostitution in their area,they're the ones who suffers at the end of the day

“Lemenemene” asked if it isn't the protesters’ critics who seem to embrace xenophobic notions about South Africans:

How does one go about unpacking the perception held by a lot of foreigners that South Africans are lazy without coming across as xenophobic?