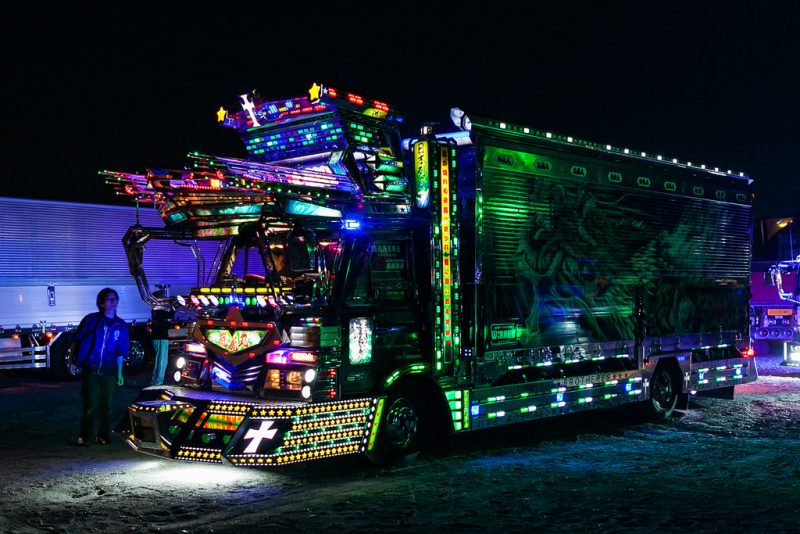 They are flashy, visually compelling and look like they're a hobby that costs a lot of money: anyone who has ever been to Japan has probably come across Japan's “art truck” subculture. Known as dekotora (デコトラ, short for “decoration trucks“), Japan's art trucks are tricked out with flashing neon lights, airbrushed murals and lots and lots of chrome.

Like any other subculture, there is also a vibrant dekotora community on Instagram. Here are a few shots of Japan's “decoration trucks.”

While dekotora is dominated by hard-core hobbyists, it's not unusual to see freighters, dump trucks and other vehicles livened up with striking decorations on Japan's streets and highways.

Here is what looks like a stylized dump truck cruising up the Tohoku Expressway:

Not all dekotora are particularly flashy, but all display the unique personality of their owner:

It was once not unusual to see delivery trucks decorated with murals. This truck features a triptych mural (on its sides and on its rear cargo doors) that depicts a scene from the 2001 animated film “Kai Doh Maru” (怪童丸):

This owner of this truck is visiting a temple in Inuyama, north of Nagoya. The has been outfitted with chrome grills and rails, as well as a mural featuring popular cartoon hero Anpan Man:

Many truckers practically live in their rigs. Here's a shot looking out the windscreen, below curtains typical of many working trucks in Japan: