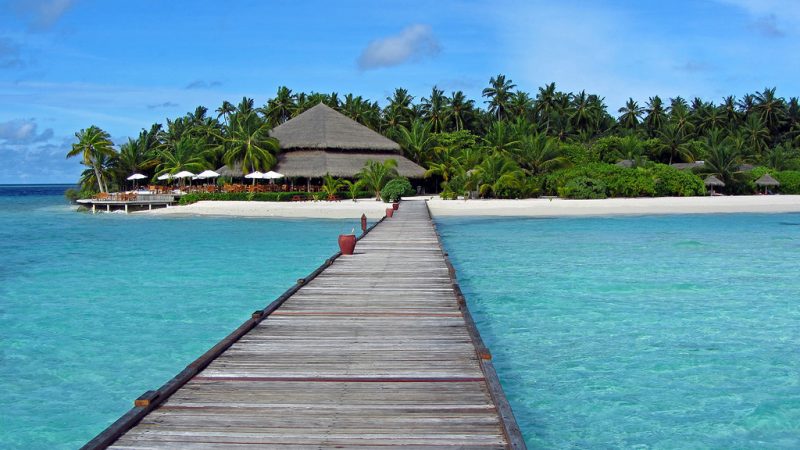 An existing resort in an island in the Faafu Atoll, Maldives. Image from Flickr by Warren Rohner. CC BY-SA 2.0

Saudi Arabia’s King Salman Salman bin Abdulaziz al-Saud is scheduled to visit the island nation of Maldives next month, and rumors are swirling that he will sign a landmark agreement to lease its Faafu Atoll for up to 99 years to develop a Special Economic Zone.

The details of the agreement are not yet available, but that hasn't stopped Maldivians from protesting on social media against the supposed plan, which many have characterized as the government “selling off” national territory.

#Maldives islands being sold off to world's super-rich. Locals to be forcibly moved & crowded onto a handful of designated reclaimed areas

Time to store a few grains of sands from the beaches of faafu atoll.A reminder of when our foot freely ran across it.That's when we owned it

According to reports, the Saudis are interested in buying a Maldives atoll to develop a world class city for the wealthy from around the world. Their eyes are allegedly set on Faafu or Northern Nilandhe Atoll, comprising of 18 islands, five of which are inhabited by around 6,000 citizens.

Maldives President Abdulla Yameen Abdul Gayoom said in a speech to the people of Magoodhoo, one of the inhabited islands of Faafu Atoll, on January 24 that the Saudi government had a special interest in Faafu Atoll. The president also said the project would bring several hundreds of employment opportunities.

According to Maldives’ Finest, a news website focused on the country's resorts, Saudi plans for Faafu Atoll includes building an international city with state-of-the-art amenities, including branches of the world’s top universities, medial facilities, leisure arrangements, shops and restaurants to accompany the natural beauty and beaches of the islands.

However, there are widespread rumors about the state allegedly selling off part of the atoll to the Saudis. The anti-grafts organization Transparency Maldives has called on the government to divulge its plans for Faafu Atoll.

Last September, an investigative exposé by Al Jazeera titled “Stealing Paradise” revealed instances of corruption by President Abdulla Yameen and his government (see Global Voices report). The documentary exposed 59 corrupt land lease deals in which the vice president engineered agreements with major casinos and hotel companies that leased entire islands for amounts reaching into the millions. The Maldives treasury saw only a small proportion of these revenues, while the rest — about USD $80 million worth — was distributed to corporations owned by the vice president's relatives and friends.

Aisha Hussain Rasheed wrote in a Facebook status why she would oppose the sale of Faafu Atoll:

Maldivians, today, are suffering the consequences of allowing political elites make decisions on our behalf without any accountability; getting behind decisions made by political leaders based only on short term personal benefits, partisan political interests and empty nationalistic, religious or political rhetoric. The possible sale of Faafu atoll (or part of the atoll) to the Saudis is not just on the government; it's also on the opposition, which allowed the constitutional amendment to go through, because that MIGHT secure the release of THEIR president. It's also on all of us, for allowing this system and atmosphere to continue.

This is no time for despair or giving up. This is a time for organizing, stop selling our Islands and reefs and Faafu Atoll fighting back.

On Twitter, people vented their anger using the hashtag #SaveFaafu:

We, the people of Maldives are totally opposed to a sale or lease of #Maldives land to another country. #SaveFaafu @KingSalmanEn pic.twitter.com/7pyx6cWQGz

All the powers of the State of the #Maldives are derived from, & remain with, the citizens. #SaveFaafu pic.twitter.com/Vyee1FE6ZX

I am a Maldivian & I am against da sale of Faafu atoll or any islands from my country to Saudi Arabia or any other foreign party #saveFaafu pic.twitter.com/fPDwWPiuaR

“Faafu” isn't only the name of the atoll, but is also a letter in alphabet of the Maldivian language Dhivehi. Twitter user Tedry shared an image of the alphabet with the letter replaced with a picture of the Saudi king:

The Maldives’ mainstream media is not reporting much and there is a report that journalists were given cash “gifts” at a Saudi Embassy event:

This is bribery may be to silence criticism over negotiations to sell Faafu atoll to Saudi Arabia or for favourable coverage of King's visit https://t.co/taNMhyLtaZ

The rumored agreement will have geopolitical implications too, argues Mickail Naseem:

Faafu Atoll sale isn't just about less land for natives, much wider implications. Allows our islands to be used for geopolitical standoffs.