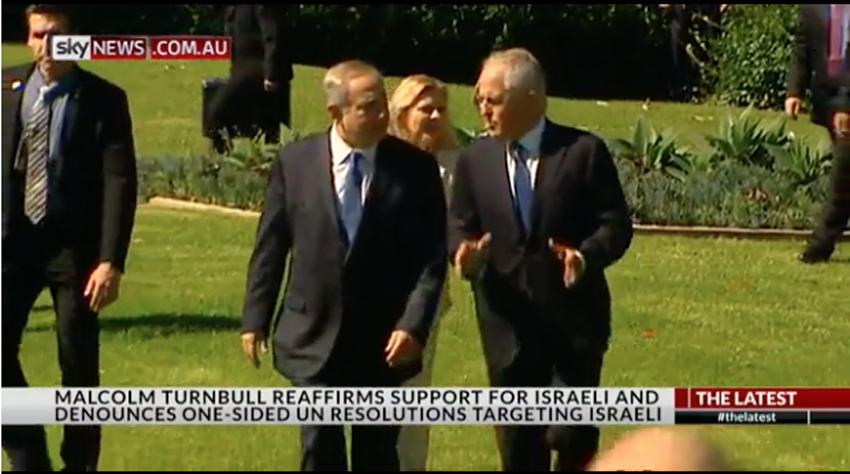 The arrival of Benjamin Netanyahu heralds the first official visit of an Israeli prime minister to Australia. However, it has not been welcomed by all.

The Wire, a current affairs program on community and Indigenous radio stations, canvassed some of the issues with Dr. Peter Slezak, co-founder of the organization Independent Australian Jewish Voices and a board member of the Australian Palestinian Advocacy Network, and Peter Wertheim, executive director of the Executive Council of Australian Jewry.

Slezak cited Israel's occupation of Palestine, the settlements built in the occupied territories and Israel's West Bank wall as examples of breaches of international law and human rights. On the other hand, Wertheim argued that the visit is about the Australia/Israel relationship, not about specific politics of the day. The two also discussed issues related to calls to boycott Israeli businesses that profit from the occupation. You can listen to the full segment here:

We want all Israelis and Palestinians to have peace and freedom; we oppose all forms of terrorism and criminal violence by either side. We recognise when there is a gross imbalance of power, conflict will never be resolved. Mr Netanyahu’s policies consistently aim to provoke, intimidate and oppress the Palestinian population which increase that imbalance, thus taking Israel irretrievably further from peace. These policies are inconsistent with Australian values and beliefs and we should not welcome him here.

Australia's conservative Turnbull government has been effusive but received some harsh criticism on social media:

The grovelling to that duplicitous thug Netanyahu is truly demeaning.

Oz praised by international pariah Netanyahu as a ‘clear eyed nation’ how has our gov become such ingrates to someone so unworthy!

There has also been plenty in favour of the prime minister's strong pro-Israel positions:

Thank you @TurnbullMalcolm 4steadfast friendship with #Israel and @Netanyahu. The ONLY successful #middleeast democracy. #auspol #abcnews24

Among the opposition Australian Labor Party, who are longtime supporters of Israel, there have been some misgivings. Two former prime ministers, Bob Hawke and Kevin Rudd, plus two former foreign ministers have supported granting diplomatic recognition to Palestine. Netanyahu has rebuked them. Rudd has responded strongly on his Facebook page:

I have been a supporter of Israel all my life. And a public campaigner against any form of anti-Semitism. But to support the state of Israel does not mandate automatic support for each and every policy of Mr. Netanyahu.

Rudd also raised an old grievance from 2010 when he was prime minister — Palestinian Mahmoud Al-Mabhouh, who was believed to have been killed by Israeli Mossad intelligence agents:

Will he use this visit to Australia to apologise to the Australian people for his government using forged Australian passports to facilitate an Israeli assassination of a member of Hamas in Dubai?

The ex-prime minister copped plenty of criticism in return:

As well as lots of social media support:

Some of voices of protest have been Jewish ones:

#Bibi doesn't speak for me – Jewish protesters against #Netanyahu in #Sydney pic.twitter.com/SAXpDI8P2U

Meanwhile, it has emerged that there was another bump on the Israeli prime minister's trip. Apparently he had to detour around Indonesia on his way from Singapore:

Gee, wonder why El Al is banned from flying in Indonesia's air space? Could it be a protest against apartheid state? https://t.co/kqf53rlzkh

There have also been the predicted protests:

While others are sharing the celebrations: