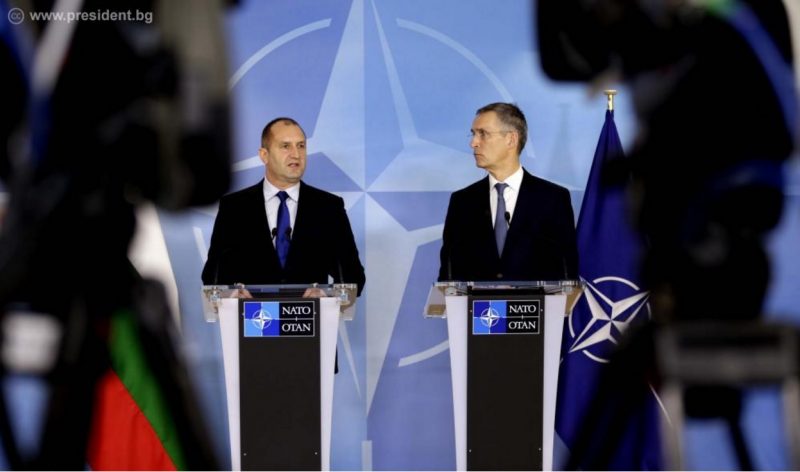 Bulgaria's Rumen Radev was described as being pro-Russia by some international media during last year's presidential race in Bulgaria. Now that he's assumed office, the label hasn't gone away, and his first moves as president have been analyzed through a pro-Russia or anti-Russia lens, despite Radev's protestations.

Talking heads and ordinary Bulgarians have theorized that foreign media, including Russian media, starting calling the president pro-Russia because the Bulgarian Socialist Party, a successor to the Bulgarian Communist Party, supports him (although Radev participated in the elections as an independent candidate). Pro-Russianness is a sensitive topic in Bulgaria, given it was in the recent past a Communist country and part of the Soviet bloc. In 1989, however, the country began its democratic transition and is now a parliamentary republic.

Others suggested it has to do with his stance on European Union (EU) sanctions against Russia, originally enacted in response to Russia's actions in Ukraine. Nikolai Neichev wrote on Facebook:

The whole theory that Radev is pro-Russia comes from his appeal to the EU to withdraw the sanctions against Moscow.

Radev recently told Euronews that while Russia's annexation of Crimea was “a violation of international law,” the sanctions “do not bring about definite benefits” and “they rather hurt the economies of Russia and the European Union.”

Some of Radev’s opponents also used the label during the election campaign to gain points with potential voters who are pro-European or suspicious of Russia. Notably, Radev's main opponent from the political party GERB, Tsetska Tsatcheva, pushed the point of Radev's supposed pro-Russia stance. In a massively watched debate aired on national Bulgarian television, Radev called the idea that he's a pro-Russia candidate “lies.”

At the time, Bulgarians on social media also protested against the framing of political candidates as pro- or anti-Russia. For example, in his post Nikolay Neichev objected to a headline in the UK newspaper the Guardian saying that “Pro-Russia presidential candidates tipped to win in Bulgaria and Moldova”:

Not even a word that the man received education in the USA and his whole [military] career was in NATO. (The most ridiculous thing is that the Guardian headline says “pro-Russia,” while inside the article they quote an ambassador [a Western diplomat in Sofia] who says Radev is 100% pro-NATO).

NATO is the international military alliance between the Canada, the United States and dozens of European countries, which Bulgaria joined in 2004. Radev holds the rank of major general in the Bulgarian air force.

At the end of December, before his inauguration on January 22, Radev continued to challenge the label, prompting reactions in social media. In a Facebook post, Peter Katzaroff, an expert in foreign relations, shared an interview with Radev from the Bulgarian online media Mediapool titled “I am a general from NATO, do not define me as a pro-Russia,” and commented:

Responsible position of a general who proves every day why he has won the trust of the sovereign Bulgarian nation!! Strategically right, Mr. President!

As president, Radev's first visit abroad was to Brussels, home to NATO's headquarters, where he met NATO General Secretary Jens Stoltenberg and Curtis Scaparrotti – Supreme Allied Commander Europe of NATO Allied Command Operations. While there, he advocated strengthening NATO while engaging in dialogue with Russia, according to Australian international broadcaster SBS Radio.

During his visit, Radev also gave interview for European Union-focused news website EurActiv.com (Bulgaria is a member of the EU), saying that “Bulgaria’s choice of the EU and NATO is strategic and should not be called into question.”

He addressed the issue of the supposed pro-Russia orientation of the interim government he appointed. He noted that the appointment of the foreign and defence ministers (Radi Naydenov and Stefan Yanev) who are pro-European and pro-NATO, contradicts the label:

I have already stated in my speech to parliament that Bulgaria’s choice of the EU and NATO is strategic and should not be called into question.

As for the sanctions [against Russia], I do not see what is the practical use of them, as the losses are obvious. I fear that the new US administration will restore the dialogue with Russia and the EU will remain hostage to the sanction war.

Not all international media have used the pro-Russia label for Radev. The New York Times, for example, opted for a more nuanced description, calling the president as “balancer in chief”:

Bulgarian politicians, including the president, want closer relations with Russia, but not so close, that their nations loses its cherished ties to the West and falls firmly into Russia's orbit.