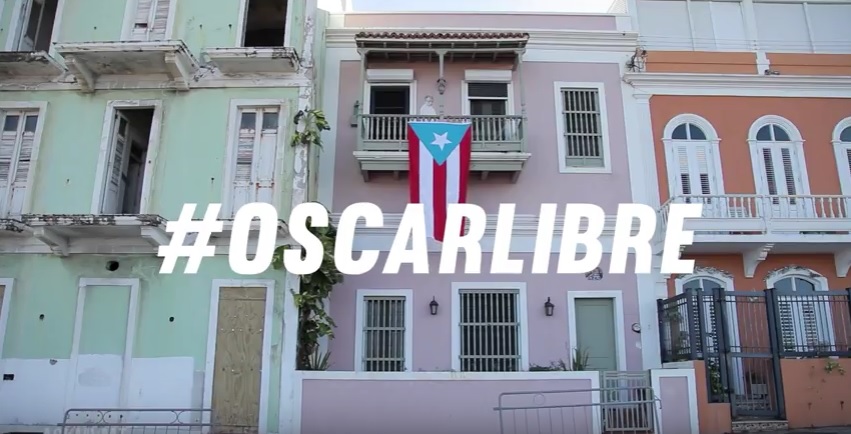 The image shows a house in Old San Juan with a Puerto Rican flag draped over the balcony. Image taken from video [1] “OSCAR LOPEZ RIVERA LIBRE!” uploaded by ACKMVMT.

The news broke unexpectedly on the morning of February 9. Social media was buzzing with rumors that Puerto Rico's longest-serving political prisoner, Oscar López Rivera, would be landing in San Juan that very same day. Shortly thereafter, both El Nuevo Día [2] and Noticel [3], two of Puerto Rico's major news outlets, had published articles confirming that, indeed, López Rivera would be serving in his homeland the remainder of his sentence, commuted in January [4] by Barack Obama during the then-U.S. president's final days in office.

López Rivera was convicted of seditious conspiracy in 1981 over his links to the Fuerzas Armadas de Liberación Nacional (Armed Forces of National Liberation), a group that used violence to advocate for Puerto Rico's independence from the U.S. He was never convicted of causing harm to anyone, but was nevertheless sentenced to 55 years in prison.

The sudden arrival of López Rivera to Puerto Rico caused much confusion and speculation, since it was completely unanticipated. As soon as the news broke, a crowd gathered outside the airport in anticipation of his arrival. However, those who wish to celebrate López Rivera's return will have to wait until his sentence ends officially on May 17 at 8 a.m. Even though López Rivera is back in Puerto Rico, he still must complete his sentence in full. He will serve the remainder under house arrest in his daughter's residence, and cannot have any contact with people who are not expressly authorized to do so, especially the press.

Facebook user Nelie Lebrón Robles advised other users to carefully mind what they posted [5] about López Rivera on social media:

There is happiness among the people because of Oscar's arrival. […] If you don't know the why of Oscar's arrival in Puerto Rico, don't leave comments that tarnish this wonderful day for the people that, beyond partisan, religious and social lines, united to demand his release.

Reflecting on the events of the past few weeks [6], another Facebook user, Cristina Vives Rodríguez, wrote this status on the night López Rivera landed in Puerto Rico:

When I woke up the day after the elections in November, still in bed, I found out through internet and through my phone that Donald Trump had been elected president of the United States. Tears of sadness flowed from my eyes instantly. I had no control over them. I whispered aloud a name: Oscar. “What will happen now? What will we do? Oscar has to be released. It's urgent. There is no more time,” I thought. Tonight, having laid down to sleep, I feel the tears come forth from my eyes again. This time they are accompanied by happy smiles because I know that Oscar will sleep tonight in his country, near his daughter. In his home… I am thankful.

Many people imagined the moment when López Rivera finally came home to Puerto Rico as a day of widespread celebration. Nobody imagined that his return would occur the way it did. It wouldn't be surprising that the day that López Rivera completes his sentence, there is widespread celebration in the streets. Thus, many Puerto Ricans continue to hold their breath until May 17.