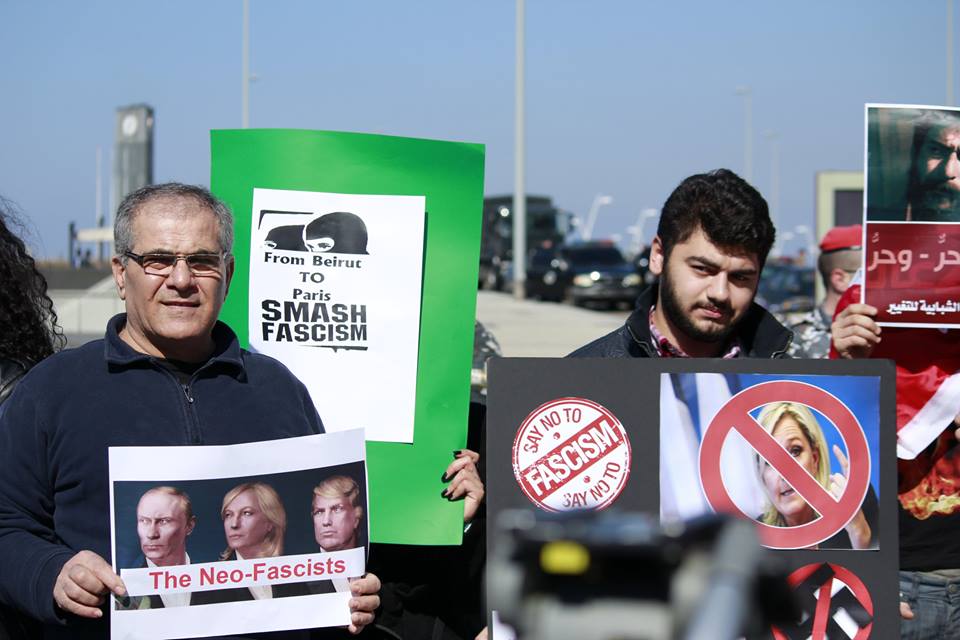 Marine Le Pen, the leader of France’s far-right Front National (FN) party who is running for president, sure made the news during her short two-days trip to Lebanon on February 20 and 21, 2017.

Le Pen was also supposed to meet the Grand Mufti Abdel-Latif Derian, but that didn't happen after she supposedly refused to wear a headscarf offered to her prior to her meeting with him, leading to its cancellation.

She told the cameras, in French, that she was not required to wear the veil when she met the Grand Mufti of Egypt. The spokesperson of the Grand Mufti of Lebanon, seen facing Le Pen, said in response, ‘Okay okay, no problem’ in English, and then in Arabic, ‘We have a different system here and he had informed her beforehand.’

Predictably, the incident immediately made international headlines and was widely praised by many, particularly those who already support her. Florian Philippot, the vice president of the FN, tweeted:

In Lebanon, Marine refuses to wear the veil. A magnificent message of liberty and emancipation sent to the women of France and of the world!

When others go back, Marine goes forward!

Others in France were of a different opinion. French media group Les répliques, for example, posted a screenshot of two tweets made by high-profile FN members to highlight how the messages seemed to conflict.

The first is by Philippot mentioned above, and the second is by Marion Maréchal-Le Pen, niece of Marine Le Pen. Maréchal-Le Pen's tweet reads: “When one enters our country, one has to respect our laws, but also our traditions and our culture.” 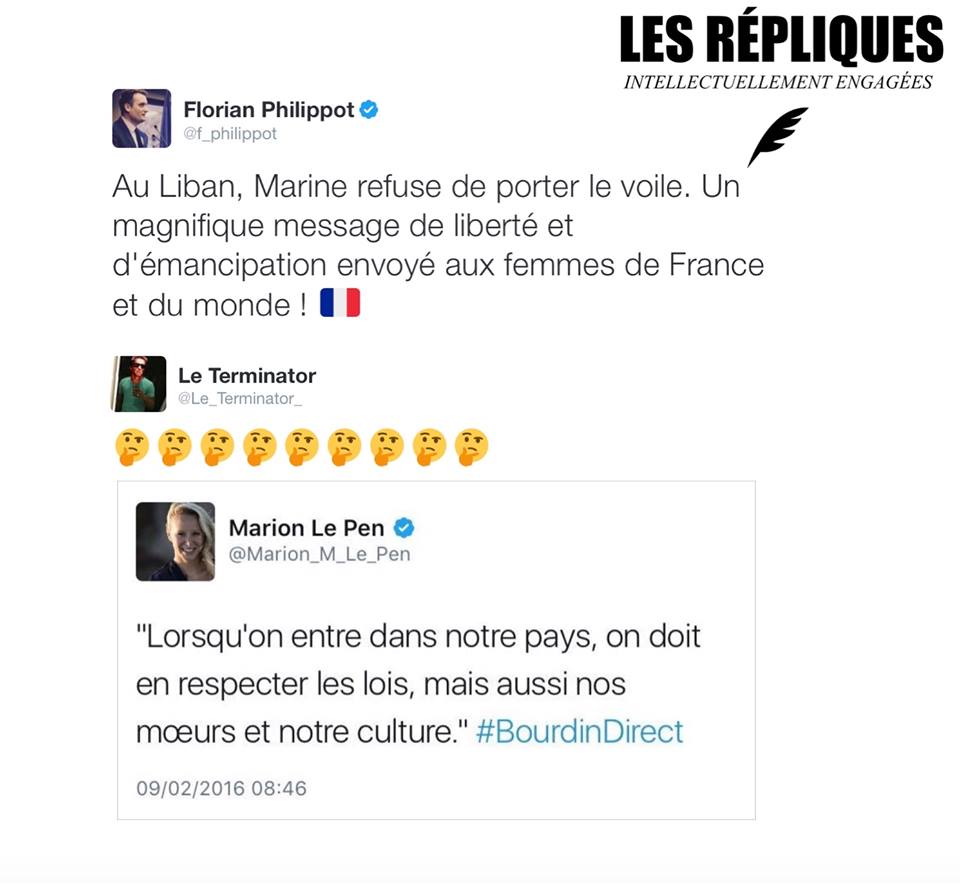 The Facebook post by Les répliques was liked over 8,000 times and shared over 1,400 times. The accompanied caption reads: “Yesterday, in Lebanon, Marine Le Pen, who had planned to meet the Grand Mufti in Beirut, refused to wear the headscarf to speak with him and clearly let him know when the cameras were on.” February 22, 2017. Source: Facebook Page.

Echoing these thoughts, many Lebanese believed that Le Pen's ‘refusal’ was nothing more than a stunt designed to catch international headlines.

Marine Le Pen was informed yesterday [February 20] that the Mufti would only meet her if she covered her head with a scarf, but she still showed up anyway with the only purpose to be as controversial as she possible.

It was nothing but a publicity stunt, and it worked. These are the current top news google results about Marine Le Pen:

He then proceeded to show a screenshot from a Google search of ‘Marine Le Pen’ to prove that, indeed, it went viral, as expected. 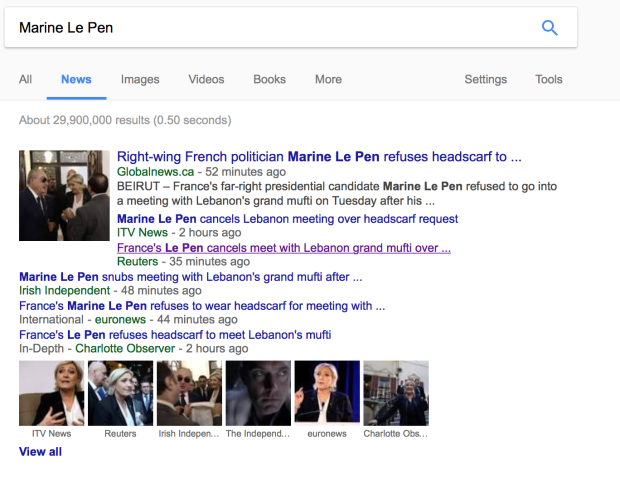 Screenshot of the Google Result for ‘Marine Le Pen’ shortly after the event. Source: State of Mind

And if there was anything more predictable than Le Pen's act, it was the Mufti's reaction. In other words, the Mufti's views are well-known and would have been known by Le Pen and her staff long before she set foot in Lebanon. As Lebanese commentator Halim Shebaya wrote:

A spokesperson for the Grand Mufti responded, drawing a comparison between the way in which she wants immigrants to respect France’s culture and her refusal to practice what she preaches in Lebanon.

But it isn't just her refusal that made the news. Le Pen is, to say the least, a controversial figure in Lebanon.

As soon as her visit was announced, many Lebanese activists launched a petition, signed by 400 people, demanding that her visit not receive ‘state visit’ status. When it was announced that the state visit would proceed nonetheless, they planned a protest. 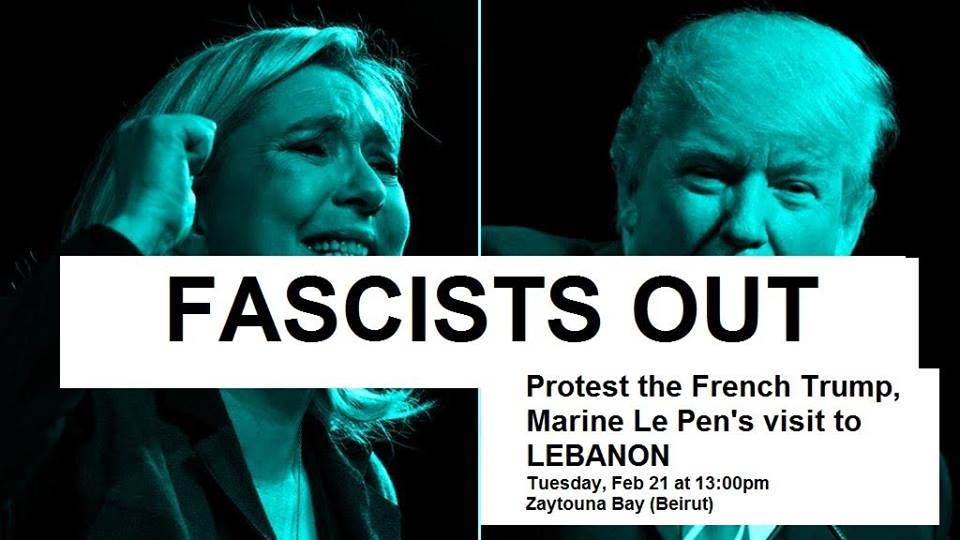 On February 20, French-Lebanese freelancer writer Edwin Nasr attempted to give some context to Le Pen's visit.

Nasr first noted how Michel Aoun would be the first head of state to agree to meet with Le Pen. This, he claims, “ascertains both Le Pen and Aoun's willingness to form an international network of solidarity around the Assad regime” reminding the reader that Le Pen is an outspoken supporter of embattled Syrian President Bashar al-Assad. Indeed, “Marine Le Pen was the only non-Arab politician to have ever been interviewed by Damascus-based SAMAA TV, a station that has, throughout the Syrian revolution, continuously incited violence against civilians and operated as a regime mouthpiece.”

Additionally, there are 17,000 French-Lebanese voters residing in Lebanon, over 70% of whom voted for a right-wing or far-right candidate in the 2012 French presidential elections. Nasr then quotes Jean-Marie Le Pen, founder of the party and father of Marine, who recently said in an interview with Le Monde newspaper that they “hold a particular tenderness towards Lebanon. […] There are undeniable ideological and political parallels between the [Front National] and Lebanese Christian parties.”

Nasr then listed a number of high-profile Front National (FN) members with ties to Lebanon.

First of all, Wallerand de Saint-Just, the party's national treasurer, “was Christian militia leader Samir Geagea's former lawyer.” Second of all, Thibault de la Tocnaye, who serves on the FN's central committee, became “an artillery officer for the Lebanese Forces (LF) in 1982. He actively participated in the Mountain War (1982-83) and now holds a medal of honor given to him by Geagea himself. Later, he joined the Nicaraguan counter-revolution against the Marxist Sandinistas by lending his military expertise to various right-wing/anti-communist Contras.” And finally, Elie Hatem, a “Lebanese lawyer and active member of the royalist, National-Catholic, and violent movement” Action Francaise “served as Jean-Marie Le Pen's primary advisor and is now an elected official representing the FN in Paris’ 4th arrondissement”. Hatem, Nasr emphasized, was “at the origin of Le Pen's trip to Beirut in terms of both mediation and organization.”

Nasr also spoke of the “Chrétienté-Solidarité” (Christendom-Solidarity) movement which is popular with FN members and which was initiated by “notorious fascist Bernard Antony“, who left the party in 2003. The movement “sent military aid packages and fighters to the Lebanese Forces and various other Christian militias in the 80s under the guise of humanitarianism.”

Its successor, “SOS Chrétiens d'Orient” (SOS Christians of the East) “regularly sets shop in front of Parisian churches and sends militants and representatives, most of whom are either local FN officials or adherents of the openly white supremacist ‘Génération Identitaire‘ movement, to Syria in a bid to normalize ties between France and the Assad regime.”

The connection with the LF is important to remember for the simple reason that Le Pen's outspoken support for the Assad regime did not go well with Samir Geagea.

Geagea told Le Pen that Assad is no different than ISIS. As he subsequently informed the press:

I took my time to explain to Le Pen the unclear images that reach the West and that we are all against terrorism which has no religion. Based on the aforesaid, Bashar Assad is one of the biggest terrorists in Syria and the region. One can’t forget the military operations he conducted over tens of years. One can't forget the terror acts he carried out. He can't stay in Syria, so (we say) no to the Islamists and no to Bashar.