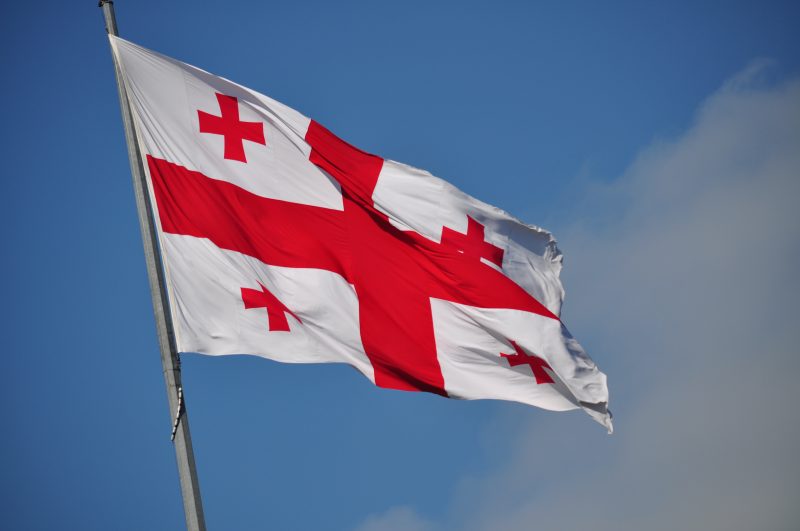 The public mood in Georgia and in particular the capital Tbilisi is tense as the country's highest court prepares to deliver a final verdict on the ownership status of Rustavi 2, a leading channel associated with the UNM opposition party loyal to former President Mikheil Saakashvili.

In recent years, with the UNM out of government, Rustavi 2 has been a source of critical reporting on the UNM's rivals in the Georgian Dream coalition government backed by Georgia's richest person Bidzina Ivanishvili.

This was reflected in the massive numbers — around 10,000 people according to some accounts — that gathered in central Tbilisi at the weekend to protest Rustavi 2's potential transfer to new owners.

Thousands came to the meeting in support of the opposition TV channel Rustavi 2.

The tussle over Rustavi 2 stretches back at least as far as the autumn of 2015 and is now reaching a conclusion.

According to the DF Watch Tbilisi-based watchdog [4]:

The Supreme Court is to decide a private lawsuit against Rustavi 2 filed by one of the company’s former owners, Kibar Khalvashi, who claims he was forced to give up his ownership of the TV company during the Saakashvili presidency. He won in Tbilisi City Court and also in Appeals Court.

If the businessman wins the case in the Supreme Court, which is the final recourse in the country’s judiciary, he will take over the company and put in place a new management.

Khalvashi has been accused of acting on the orders from and being backed by the authorities; winning the lawsuit might therefore mean that Rustavi 2 loses its editorial independence, according to UNM and some analysts.
Rustavi 2 is a strongly supportive of Saakashvili’s party and a critical voice against the government.

The ruling is being seen as a key test of Georgia's judicial institutions. The South Caucasus country is the most democratic in the region but a longer tradition of Soviet-style authoritarianism looms over national politics.

Fate of Rustavi 2 will undoubtedly determine future of Georgia, democracy can't survive without freedom of speech!

It is not only UNM supporters concerned about the potential neutering of the channel.

#Media [6] is a natural ally of society. It can show flaws! …And never make mistakes, which already made by your opponents. Support #Rustavi2 [7]

Major hit on #Georgia [9]‘s free media; the gov't about to hand over Rustavi2 to its loyalists. https://t.co/gkkVDsoXrc [10] pic.twitter.com/CQctAi2Vfk [11]

As noted in the tweet above, Rustavi 2 stopped broadcasting over the weekend to protest the ongoing legal wrangle and alleged pressure on Supreme Court justices from the government. It has since returned to the airwaves.

It is not yet clear when the supreme court will issue its ruling.