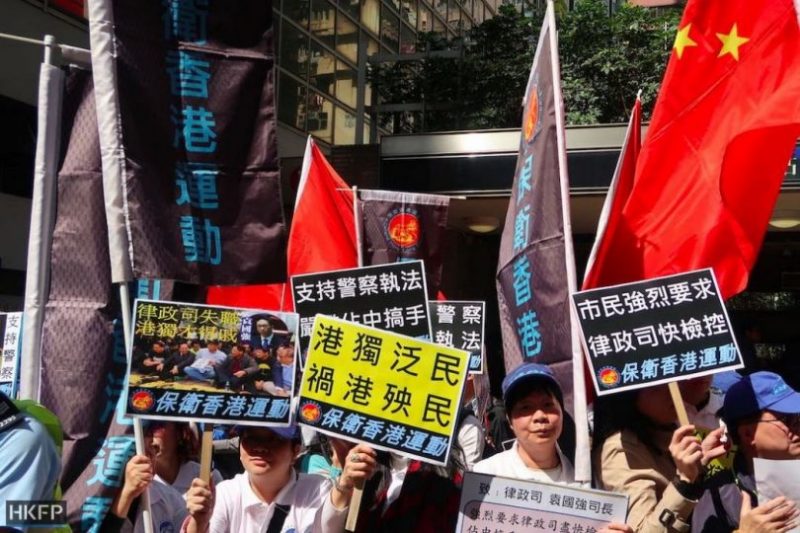 Seven police officers in Hong Kong were convicted on February 14 of assaulting a pro-democracy activist in 2014 during the Occupy Central protests demanding citizen nomination of the city's top leader.

Tsang Ken was handcuffed by the officers and brought to a dark corner, where the officers punched and kicked him. Although the assault was videotaped and aired on television news and medical records showed that Tsang had sustained injuries, the case was only brought to the court in June 2015, almost two years after the incident.

The court sentenced the officers to two years in prison. On Facebook, many applauded the result, some joking that it was the best Valentine's Day present.

Judge David Dufton said when handing down the sentence that the court needed to “make an example” out of the case to ensure that no officers would attempt to commit the offence in the future:

The defendants damaged Hong Kong’s reputation in the international community… There was no justification to take Tsang to the substation for the assault.

Police groups objected to the conviction and prison sentence, and Police Commissioner Steven Lo Wai-chung has given permission to raise funds for the seven convicted officers.

Pro-Beijing groups were outraged and rallied on Saturday against the outcome. During the rally, the protesters demanded the city's Chief Executive CY Leung grant amnesty to the seven. They criticized the court for being lenient on Occupy Central protesters and harsh on the police officers “who were just performing their duty”.

Occupy Central was a protest movement that took over downtown Hong Kong for three months at the end of 2014. Participants demanded that Beijing let the people of Hong Kong, a special administrative region of the mainland, to choose their own candidates for chief executive, instead of just allowing a vote on pre-selected candidates. Occupy protesters withstood violent police efforts to clear their camps using tear gas and pepper spray with the help of umbrellas, leading some to dub the movement the “umbrella revolution.”

A number of pro-Beijing celebrities also spoke out on Facebook in opposition to the police officers’ conviction and sentencing. Film director Clinton Ko wrote (and later deleted):

Yellow ribbon [pro-democracy] judge is siding with those who bring chaos to Hong Kong. For the pro-independence rioters who set fires, beat up police and destroyed public property, the dog judge gave a light sentence, some were found not guilty. This is extremely biased.

Another pro-Beijing lawmaker, Junius Ho, commented through a Facebook video:

They didn’t point a gun at protesters. They only hit Tsang twice in a corner to vent their anger [… ] Small punishment in order to prevent someone from making a bigger mistake in the future.

The case also attracted responses from mainland China. State-affiliated tabloid Global Times ran a commentary criticizing Judge David Dufton for the judgement and blaming the “colonial legal system” for “violating the spirit of law” (Hong Kong was a British colony for 156 years until 1997):

[The legal system] is tainted with colonial color and has yet to establish loyalty to China’s constitution and [Hong Kong's] Basic Law. So when dealing with political cases, its judgement is off track and has violated the spirit of the law. […] This is against Hong Kong's interest and will bring harm to Hong Kong’s legal system.

Social media celebrity Cai Xiaoxin from mainland China publicly stated that he would pay 10,000 yuan, or approximately 1,400 US dollars, for someone to beat up Judge David Dufton.

And Tiffany Chen, wife of Charles Heung whose family is tied to one of Hong Kong's largest and most powerful organized crime groups, the Sun Yee On Triad, also spoke out against the judge's decision on Weibo.

‘What's frightening is police wrongdoing can be justified by politics’

Applied social sciences professor Chung Kim-Wah found the situation ludicrous and pointed out that the police actions had damaged the force's reputation. He urged the head of the police to apologize to the public for the officers’ misconduct:

Now the wife of the triad leader speaks up for Hong Kong's police. Has anyone tried to reflect on the collapse of the police's image? Or should they take pride in it? Have the former and current heads of the police force any sense of shame? […] Once the police force had been viewed as the most trustworthy law enforcement department, but recently it has fallen to its lowest point. […] Just imagine, as a major law enforcement force, a quarter of the citizens do not trust them. How can they perform their job?
Every police officer should think hard to save their reputation and re-establish their relationship with citizens. It is the key responsibility of the head of the police force. But now they are burying themselves alive.

In fact, the outrage and weekend protests ignited a huge amount of angry criticism against the police on online media outlets and social media. As media worker Lam Yin Bong argued on Stand News:

Police misconduct is not frightening as these are single cases. What's frightening is police wrongdoing can be justified by politics. The whole pro-establishment and law enforcement department can then put aside judicial justice and the integrity of law enforcers.

Fearing that Hong Kong’s rule of law has been undermined by Pro-Beijing groups, a lawyer collective issued a statement demanding that the secretary for justice take action to ensure that the judiciary can exercise its judicial function free from any contemptuous attacks.