Facebook Gives a Voice to Missing People in Mexico

Screen capture from the Facebook group “Missing and Kidnapped in the State of Puebla.”

In Mexico, friends and families look for missing people by sky, sea, and land, and also online in Internet ads. These desperate searches can exhaust the resources of whole households, and so many people have turned to social media and other digital platforms as an effective way to get the word out. Among them, Facebook has become the most popular.

The names of these groups are often brutally straightforward, like “Desaparecidos y levantados en el estado de Puebla” (Missing and Kidnapped in the State of Puebla) — a group created to disseminate information about and help locate missing people in that state.

Every search poses special difficulties, pains and uses many resources. To make matters worse, attempts to find missing people often collide with the incompetence or even the corruption of state officials who are supposed to help.

Below, we review some ongoing searches now underway in Mexico on Facebook. 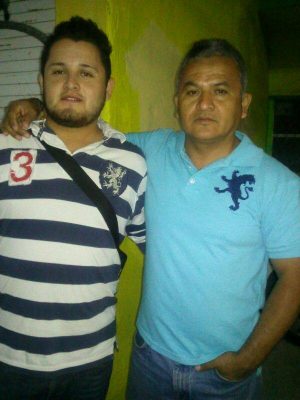 On April 14, 2014, Horacio Castillo Reyes and Horacio Castillo Herrera – 47 and 24 years old, respectively – were last seen in Nuevo Laredo, Tamaulipas, in the north of the country. The next day, the family was supposed to move to Mexico City, but the plans never materialized after family members tried unsuccessfully to call them and contact them online. During one of the phone calls, a man answered the father's cell phone. According to relatives, “He said he had found the device. We called again and he told us to stop screwing around or they would kill us, too.”

While dust gathers on their files in the drawers and desks of the institutions responsible for locating these men, their loved ones keep the case alive by posting regular updates on the Finding Horacio Castillo and Son Facebook page. In each message, they urge readers to join the search and share the page.

Help them return home. Do not be indifferent to the pain. They are not just one more of the thousands missing… they are a father, a son, a brother, a husband, an uncle, and a grandfather. We will not rest until we find them. 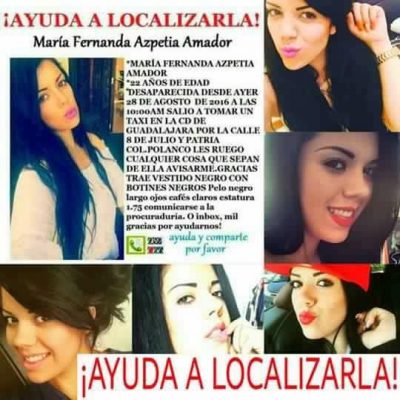 Relatives of Fernanda Azpeitia Amador, who disappeared on Aug. 28, 2016, launched the Find María Fernanda Facebook page to use as a mailbox for receiving information about the young woman's whereabouts. The family also used this space to share updates about the investigation and news related to the case. Recently, there are reports of threats coming from organized crime addressed to the agency working on the case. Amador's mother writes:

My life was quiet, controlled. Everything was in order until this nightmare began, this anguish that does not let my life go on. I need to find my daughter.

Image translation:
Help find her!
María Fernanda Azpetia Amador
22 years old. Went missing yesterday Aug. 28, 2016 at 10 a.m. She went out to get a cab in the city of Guadalajara on 8 de Julio Avenue and Patria in Polanco Borough. Please let me know any information you may have about her. Thank you. She’s wearing a black dress with black booties. Long black hair, light brown eyes, 1.75 meters [5'9″] tall. Contact the Attorney General or email me. Thank you so much for your help. Help by sharing please.

María Fernanda was last seen getting into a taxi heading home after leaving the apartment of her former sister-in-law, who is considered a suspect in her disappearance, as is her brother, the victim's ex-boyfriend. Waiting at home for the 22-year-old woman is her small daughter and her family members.

Fernanda's family has denounced the inefficiency of police investigators. Five months after her disappearance, her mother wrote:

Daniel Ramos Alfaro was last seen on Oct. 2, 2013. Ramos is a teacher in rural Mexico and a member of CONAFE (National Council for Educational Development) in Uruapan, Michoacán. His forced disappearance at the hands of the military took place months before the tragic mass kidnapping of 43 students in Ayotzinapa.

You can learn about Ramos’ story in a video shared on a Facebook page dedicated to his case. On the day of the incident, Daniel went to the rural community of Betania and the town of Nuevo San Martín, Michoacán, to teach basic education classes, as he had done for four years. He never reached his destination on Oct. 2, but his belongings were found later that day on the road he traveled. The date and place of his disappearance coincided with an operation that the Mexican army had carried out to eradicate marijuana in the area. 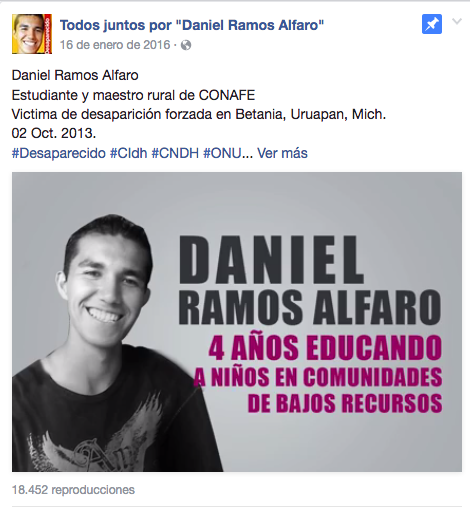 Screen capture from the Facebook page “Standing Together for Daniel Ramos Alfaro.”

“My little girl, do not grow anymore”

Families that create Facebook pages for missing loved ones try sincerely to share their agony. This is especially true for the mothers who operate Facebook accounts for their missing children. 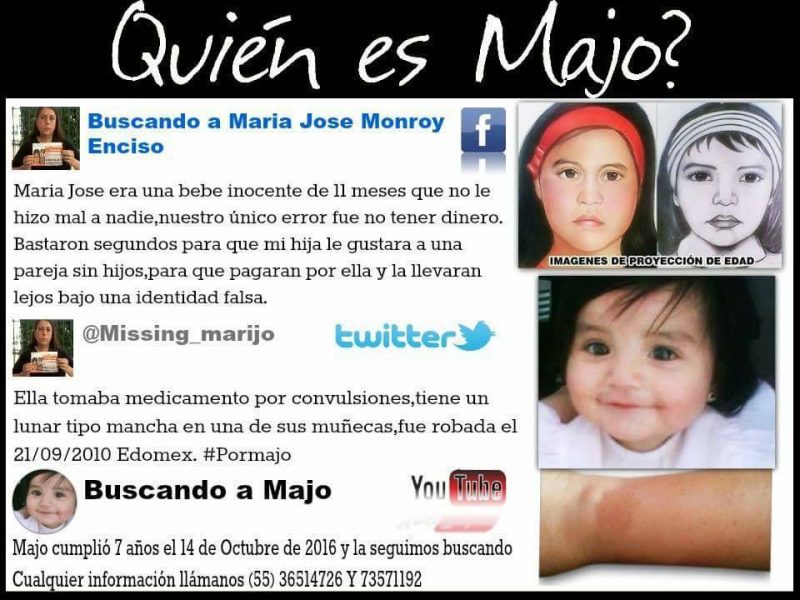 This phenomenon is certainly on display with “Searching for María José Monroy Enciso,” who was kidnapped in 2010, when she was just 11 months old. The perpetrator tried to murder the girl's mother, but she survived. Although he was arrested, he has kept the child's whereabouts a secret.

Today, the mother tells her story in detail using Facebook, hoping to reach someone who has information about the location of her baby, who is now a 7-year-old girl.

An 11-month-old baby who was taking medicine for seizures; an innocent baby unable to fend for herself; an innocent girl, unable to understand the danger surrounding her. She is now 7 years old and lives with a family that is not hers, under a false identity, a name bought with money stained with pain and injustice. She arrived in late September or early October 2010 at the house of her captors, they must have baptized her, they must have changed her age – one month later or maybe a month before. She was born on Oct. 14, today, her birthday must be another day…”

Image translation:
Who is Majo?
Maria Jose was an innocent 11-month-old baby who never did anything bad to anybody. Our only mistake was not having money. It only took seconds for a childless couple to like her and pay for her to be taken under a false identity.
She took medicine for seizures. She has a distinctive birthmark on one of her wrists. She was stolen 9/21/2010 Edomex. #Formajo
Searching for Majo
Majo turned 7 years old on Oct. 14, 2016 and we continue to look for her. Call (55) 36514726 and 73571192 with any information 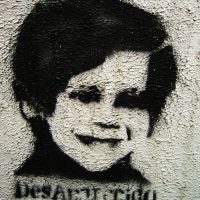 Official figures in Mexico indicate that 27,659 people went missing between 2007 and 2015, while the organization FUNDEM (United Forces for Our Missing People in Mexico) says the country was missing as many as 300,000 people by 2016.

Meanwhile, the National Research Foundation for Stolen and Missing Children found that 45,000 children were abducted for sexual or labor exploitation and organ trafficking purposes — all in the short timespan between 2013 and mid-2014.