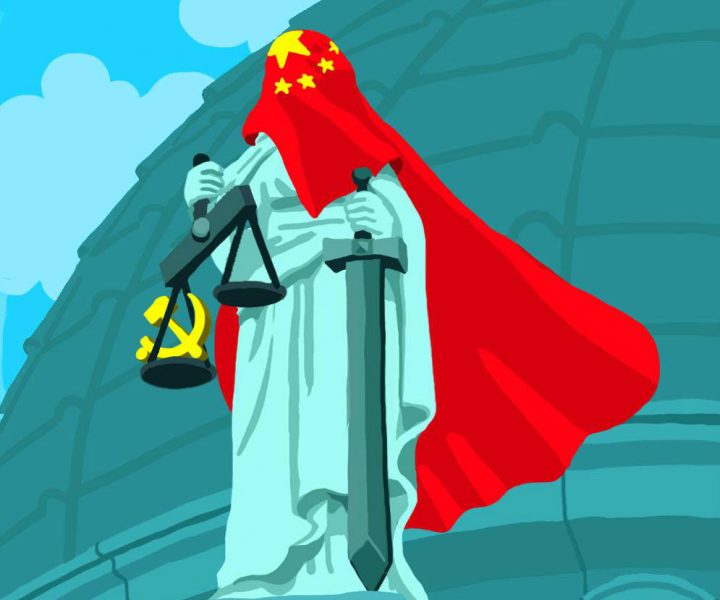 Arto is a cartoonist from Hong Kong who won Best Political Cartoon in the 2016 E-Citizen Awards, organized by the civic groups Hong Kong In-Media (inmediahk.net) and the Culture and Media Education Foundation to promote original reporting, political cartoons, video documentary and photography online.

Below is an interview with Arto conducted by Betty Lau, which was originally published in two parts in Chinese on inmediahk.net on December 17, 2016 and January 23, 2017. The English translation is published on Global Voices as part of a partnership with inmediahk.net.

Arto started participating in local protest movements in 2010 when Hong Kong's Legislative Council passed a budget for the construction of the Rapid Railway connecting China's Shenzhen to Hong Kong. He said:

It is impossible for you not to speak up against the rotten system if you identify yourself as a Hong Konger.

Previously a graphic designer, he only started drawing online in 2011. At first he drew for fun; he published his first set, titled “Golden Creature Card,” on the popular platform Golden Forum. From there, he became an online celebrity. Later, his work became more political:

When incidents trigger emotion, anger, they turn into drawings.

But it is very difficult to develop a career as a political cartoonist in Hong Kong. Sometimes, his clients ask him not to use the name Arto on jobs because the name is too political.

In 2016, as he was gathering his online works into a book, the publisher asked him to remove some politically sensitive content. At first, the publisher referred to a drawing related to Chinese President Xi Jinping and the Chinese Communist Party as sensitive. Then they wanted him to remove content that carried China’s national flag and the flag of Hong Kong, a special administrative region of China, arguing that the works might violate the National Flag and National Emblem Ordinance and the Regional Flag and Regional Emblem Ordinance. 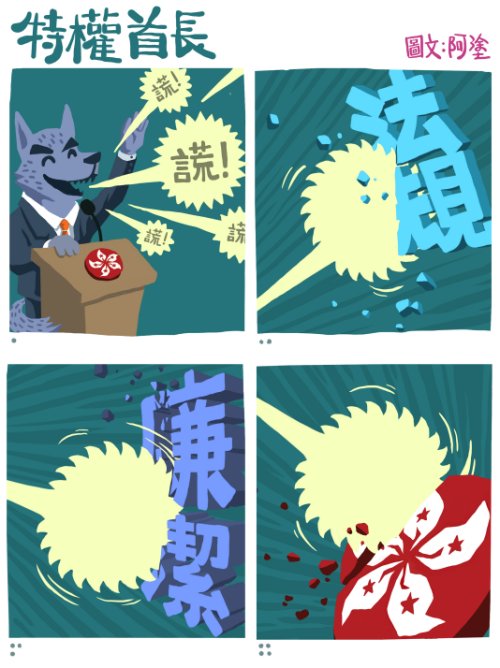 A publisher told Arto that some of his work may have violated the law. Below is one of the pieces accusing the Hong Kong chief executive of destroying Hong Kong's core values. Image via inmediahk.net.

According to the two ordinances, anyone who desecrates the flags and emblems by publicly and willfully burning, mutilating, scrawling on, defiling or trampling on them risks a fine of 50,000 Hong Kong dollars (approximately 6,000 US dollars) and three years in prison.

The incident is so ridiculous. How can you avoid flags in political cartoons? […] They worried too much. So far there is no case against Hong Kong publishers using those ordinances.

He then contacted another small publisher and all the works were printed without issue. He criticized the self-censorship practices that are currently common in Hong Kong as pathetic:

You speculate that the government may sue the publisher, and so decide to censor the work. The whole incident goes against my principles. If I give in, similar things will happen again and again and eventually no one can draw the national and regional flags and emblems. Isn’t that ridiculous?

With the space for political cartoons in printed media is shrinking, Arto releases his works mainly online. His award-winning cartoon, “After the reinterpretation of the Basic Law” was first published on his Facebook account with thousands of likes and shares. 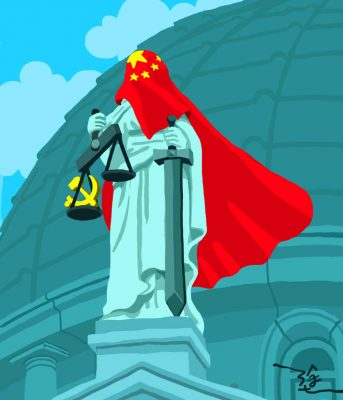 He drew the cartoon after China's Standing Committee of the National Congress exercised its unrestrained power to interpret Hong Kong’s mini-constitution, known as the Basic Law, in November 2016. That “reinterpretation” was in response to two Hong Kong lawmakers who altered the wording of their oaths to pledge allegiance to “the Hong Kong nation” instead of Hong Kong as a special administrative region of of the People's Republic of China.

The Standing Committee, China's top legislative body, said politicians who do not correctly swear the oath will be barred from office, preempting a local court's ruling on whether the two independent lawmakers should be disqualified for their actions. The move was criticized by many as hampering Hong Kong's autonomy.

Arto could only express his anger and sense of helplessness over the situation through drawing. The result was a cartoon featuring the statue of Themis, which is a symbol of justice erected outside the old Hong Kong Legislative Council and currently at the Court of Final Appeal, draped by China’s national flag. The weight of a hammer and sickle, the symbol of the Chinese Communist Party, tips the scale she's holding.

The most insincere, unlawful party wants to use law to judge whether a person is sincere.

By using humor and light-hearted presentation, [the cartoon] can help people to develop an impression of social and political events. Then they may have the motivation to read more concerning the events. It is like a stepping stone. This is my philosophy when drawing political cartoons.

Social media has helped him in his creative journey:

In conventional printed media, you have to flip a few pages and find the cartoon. But ordinary readers may just read the front page and entertainment news. The internet is different, the cartoon can pop up anytime when you are eating a meal or sharing your status about everyday life.