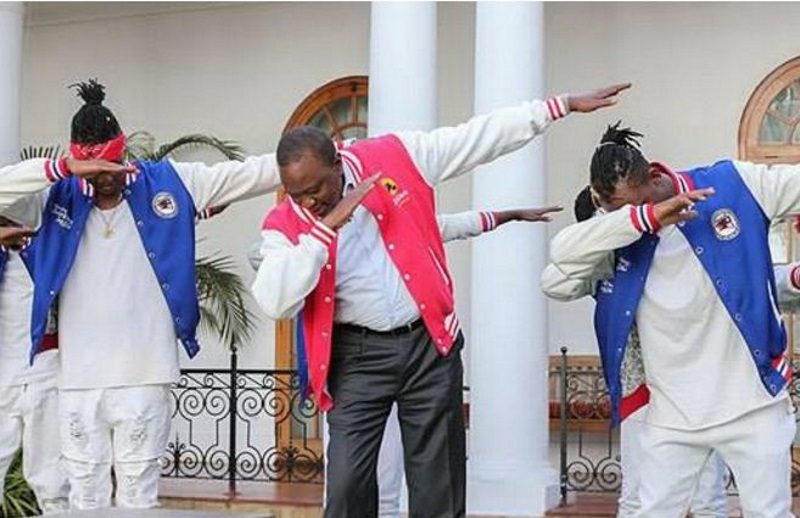 A campaign by Kenya's President Uhuru Kenyatta, #UhuruDabChallenge, to motivate young people to register to vote went awry after social media users took the opportunity to point out misplaced priorities in his administration.

The challenge requires youths to “dab” —  a type of dance move that resembles sneezing into your elbow — in voter registration centres and share photos and videos of themselves doing it on social media. Kenyans will go to the polls on August 8, 2017.

The winner of the Dab challenge, whether it is a group or individual with the most retweets at the end of the remaining five days of voter registration, will be rewarded for their patriotism, including visiting with me at State House.

And as part of the campaign, Kenyatta recorded a video of dab moves at the State House with a popular local dance group called FBI.

However, Twitter users inspired by the hashtag started publishing criticism under #DabOfShame. Kenyans wondered how the president could find time to record a music video while the country is going through major social and political problems such as hunger, drought, cattle rustling and nationwide strikes by university lecturers and doctors.

Following the backlash, tweets and photos related to the campaign hashtag (including the one mentioned above) were deleted from President Kenyatta’s Twitter account.

Despite deleting the tweets, some Twitter users such as Dikembe published screenshots, which they are mockingly sharing them online.

President Uhuru DELETED these tweets! Should we have a law prohibiting deletion of presidential archive? #DabOfShame #UhurudabChallange pic.twitter.com/kPEp4eiajn

Showing his disapproval of the challenge, Master Chengo posted two images showing the difference between a presidential dab and a common citizen's dab:

#UhuruDabChallenge in for a rude shock after being turned down by pissed Kenyans. It turned into #DabOfShame Tia bidii #Sir_presidente

#UhuruDabChallenge in for a rude shock after being turned down by pissed Kenyans. It turned into #DabOfShame Work hard #Sir_presidente

Kenya is experiencing severe drought, which the president has declared a national disaster.

#DabOfShame after dubbing next is twerking… we shall do it now that drought is a national disaster.

Twerking is a type of dancing in which an individual moves to music in a sexually provocative manner.

While Kibii Eliud asked the president:

Mr President, how about dabbing off clashes in Kerio Valley and Laikipia? https://t.co/MAOiwIUkWT via @TheStarKenya #DabOfShame

There have been a series of clashes in Kerio Valley associated with banditry and cattle rustling that have left several people dead.

Stop exaggerating what My Dad did, as a President he has to use Entertainment Allowance well. #UhuruDabChallenge pic.twitter.com/j1qtJHEKzH

However, there are Kenyans such as Yobra Silver who was in support of the campaign. He wrote:

#UhuruDabChallenge wow! HE Uhuru me and my hommies are dabbing????

And Annie made the following observation:

Its only in Kenya that a president is not supposed to dab, laugh or have some good time~smh #UhuruDabChallenge