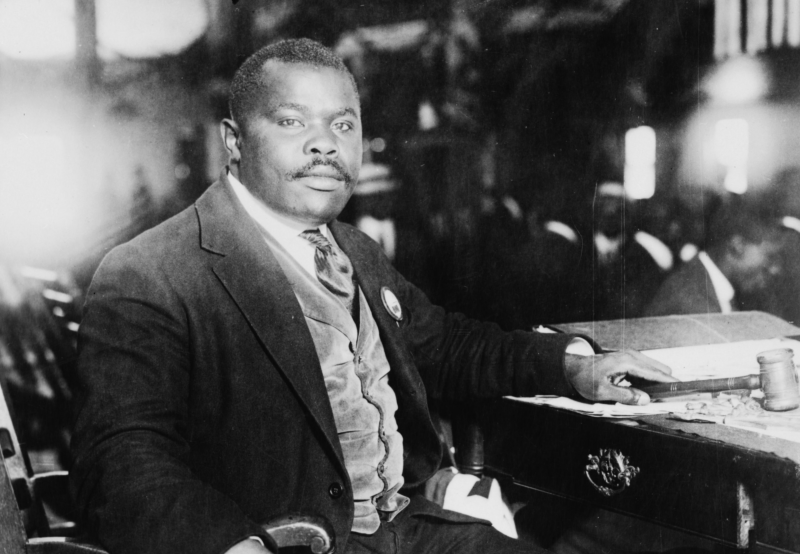 Marcus Garvey in 1924. PHOTO: Public Domain via the Library of Congress.

President Barack Obama issued 212 presidential pardons and 1715 commutations during his tenure, but he refused to sign a presidential pardon for the Right Honorable Marcus Mosiah Garvey, National Hero of Jamaica (1887-1940). This despite pleas from the Congressional Black Caucus, which included civil rights movement elders such as Representatives John Conyers, John Lewis, and Charles Rangel, as well as the former and current prime ministers of Jamaica, Garvey’s son, Dr. Julius Garvey,  and thousands of activists from all over the world.

Falsely convicted on charges of mail fraud in 1923, Marcus Garvey served two-and-a-half years in the Atlanta Federal Penitentiary before his sentence was commuted by President Calvin Coolidge in 1927. After many attempts to gain a presidential pardon, the first of which was initiated by Garvey himself, the election of President Obama raised hopes that attempts to clear Garvey’s good name would finally be realized.

In Dreams from my Father, then senatorial candidate Barack Obama expressed his awareness of Garvey’s stature within the Pan-African community when he quoted one of Garvey’s signature phrases, “Rise up, ye mighty race!” This was widely interpreted by many Garveyites as a sign that Obama would change US policy toward Garvey and many other black leaders whose actions where criminalized by the Bureau of Investigation (forerunner of the FBI) and the Department of Justice.

There were other signs that President Obama, who was fond of quoting Dr. Martin Luther King Jr.’s statement “The arc of the moral universe is long, but it bends towards justice,” believed in the values for which Garvey and King had sacrificed their lives. During his tenure, as Ta-Nehisi Coates has pointed out, President Obama often lectured the black community on the need for education and adherence to the values of hard work and self-reliance. And who embodied these ideals better than Marcus Garvey?

Garvey came to America a penniless immigrant in 1916, and ended up changing the way black people thought about themselves. According to the Black Business Network, “by 1917 Garvey and 13 members founded the UNIA, which by 1921 had over eight million members worldwide. He established a newspaper, The Negro World, which at its peak had a weekly circulation of over 500,000; a shipping line, the Black Star Line, which was founded with ten million dollars in investment capital; the Negro Factories Corporation, which generated income and provided jobs through its numerous enterprises, including a chain of grocery stores and restaurants, a steam laundry, tailor shop, dressmaking shop, millinery store, publishing house and doll factory. In New York City alone, Garvey owned several buildings, a fleet of trucks, and employed over 1,000 black workers.” Marcus Garvey, “the black angel of success,” had offered a proven blueprint for the redemption of Africans at home and abroad.

As someone who prides himself on his professorial credentials, President Obama missed an opportunity to engage with the American people in an honest discussion about race and the erasure of black heroes from our collective memory. Justin Hansford, attorney for the Garvey family, called this a “teachable moment,” where Obama could have shown how Garvey’s accomplishments lifted the black community out of poverty and set them on the part to self-reliance and entrepreneurship. President Obama, as the de facto political leader within the Pan-African community, could have offered a vision based on Garvey’s work—a philosophical foundation—that could have served as buttress against the incoming administration’s predictable assault on civil and human rights.

President Obama chose silence, so we are left only with questions. Did President Obama, who portrayed Garvey as merely a nationalist in Dreams, ignore Dr. Julius Garvey’s letter where he suggested a broader understanding of his father’s work as a Pan-African leader? Or was the president afraid that if he pardoned Garvey it would be perceived as an embrace of black America and by extension, disenfranchised America, regardless of race and religion? Was President Obama fearful that his legacy would be tainted by the perception of radicalism? We will never know.

One thing, however, is certain: despite his many laudable and important accomplishments, President Obama’s failure to follow through on what was a clear moral choice will never be forgotten as long as Marcus Garvey’s memory remains alive.

Geoffrey Philp is the author of Garvey’s Ghost; his work is represented in nearly every major anthology of Caribbean literature. He is currently working on a collection of poems, “Letter from Marcus Garvey.” Geoffrey lives in Miami and teaches English at the InterAmerican Campus of Miami Dade College.